Archive of the month: Let there be light!

Although the process of installing electric lighting in College had only begun a few years previously, by the late 1920s it became clear that remedial works were required to address issues related to that original work.

Early attempts at installing electricity had been undertaken without a full understanding of the serious consequences of hazardous fittings. As such, much needed checks and improvements took place across the College in public and private rooms, including the SCR. Indeed in an entry in the conclusion book dated 20th February 1928 it is recorded in a report by Messrs Handcock and Dykes, an electrical engineering company based in London, that the ‘electric candles’ that had recently been installed in the SCR were ‘a source of danger’ and as such they should be removed. This was swiftly followed with suggestions by some of the Fellowship that installing electricity had been a terrible waste of money and that lighting in the SCR should revert to wax candles only.

However, a report by Percy Morley-Horder, who was already engaged by the College for work on the new accommodation buildings in Chapel Court and who had designed and overseen the construction of the new cricket pavilion amongst other work, was not quite so radical. Morley-Horder made the suggestion that if the room was rehung with large portraits only and those portraits were then lit with picture lights, then the room would be suitably lit. The atmosphere of the room, he agreed, would be enhanced when table candles were used in addition to the picture lighting.

As can be seen from this photograph of the SCR taken in the early 1920s, the picture hanging has a more Victorian feel to it, with various small prints in addition to larger portraits. This was obviously not conducive to Morley-Horder’s idea of bigger scale picture lighting and as a result of his suggestion for a revised lighting scheme, the SCR was subject to a picture rehang. The candle sconces shown in the picture are also specially mentioned by Morley-Horder as being ‘very good of their kind and should remain’ without being converted to electric light, only being lit and used for very special occasions. The sconces themselves were made by Barkentin and Krall as part of an 1878 redecoration of the SCR. 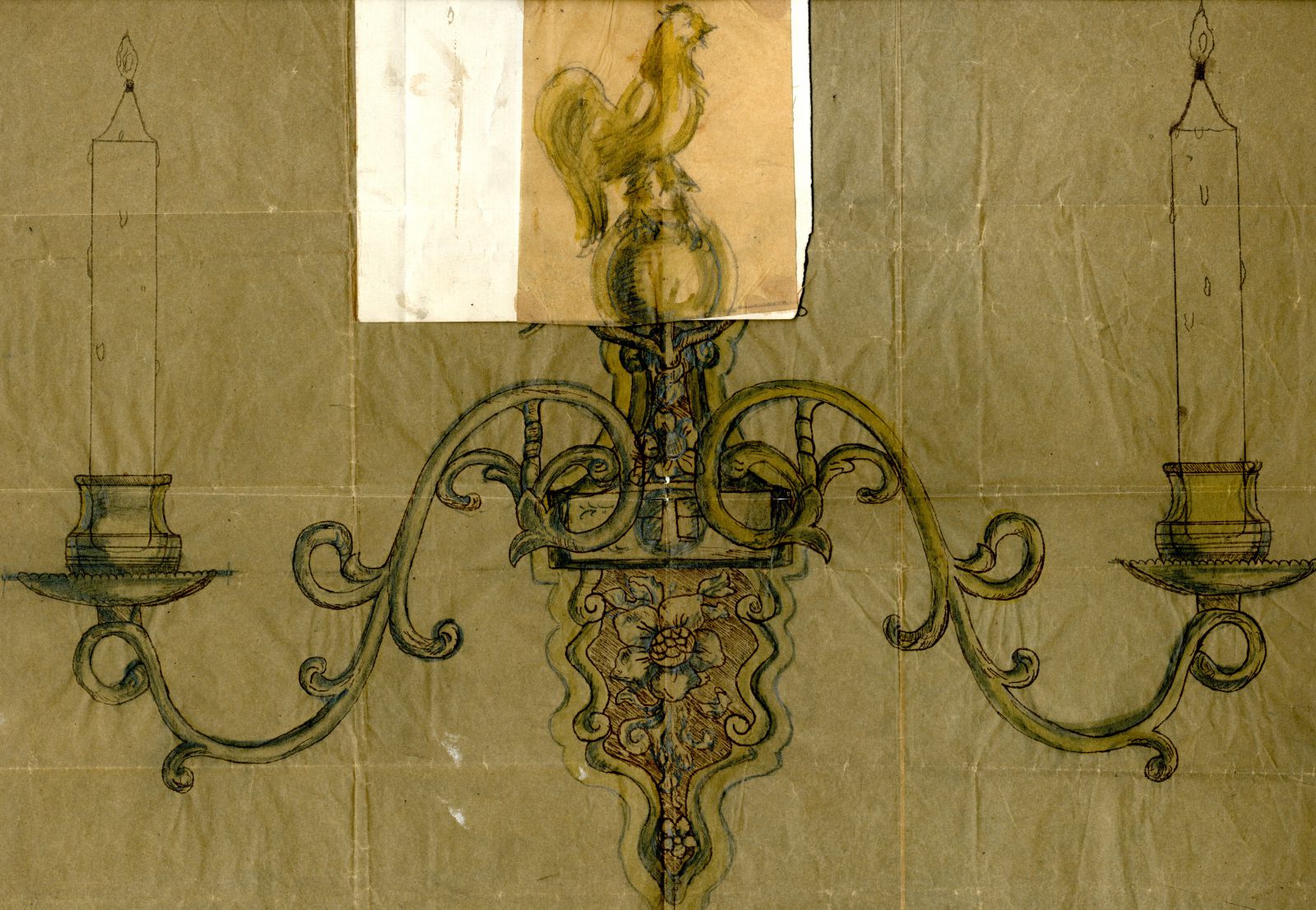 Although there was some support, it was decided to follow Morley-Horder’s advice not to electrify the candle sconces. The suggestion to install picture lighting was not chosen, however, and at a meeting of 15th June 1929 the decision was made to install a central light into the ceiling of the SCR, the chandelier now there being the light fitting chosen. The work to rewire the SCR was subcontracted by Handcock and Dykes to Baily, Grundy and Barrett Ltd of St. Mary’s Passage, Cambridge, their former business premisses currently occupied by the Cambridge Satchel Company. The Barrett of Baily, Grundy and Barrett Ltd was Cambridge Graduate, Arthur Barrett, who was admitted to Christ's in 1884, joined the business in 1886 and was managing director 1893 - 1921.

Despite his seemingly rational approach to lighting in the SCR, Morley-Horder had a somewhat more cavalier approach to the display of the paintings. In a report to the College he produced in 1927 with regard the lighting, he made the suggestion that the frames of all the portraits hanging in the SCR “should be painted to match whatever tint is decided upon (for the walls)". This was apart from the portrait of Coleridge seen hanging over the fireplace in the photograph (now hanging in the Hall), which he suggested should be removed from its frame and inserted into the panelling in the SCR. The following year, however, he had changed his mind and made the suggestion that at least another four portraits, in addition to Coleridge, should be removed from their frames and inserted into the panelling in each of the four corners of the room.

Fortunately the College decided against taking this advice, but Morley-Horder’s suggestions for this scheme can be seen in these drawings made by him. 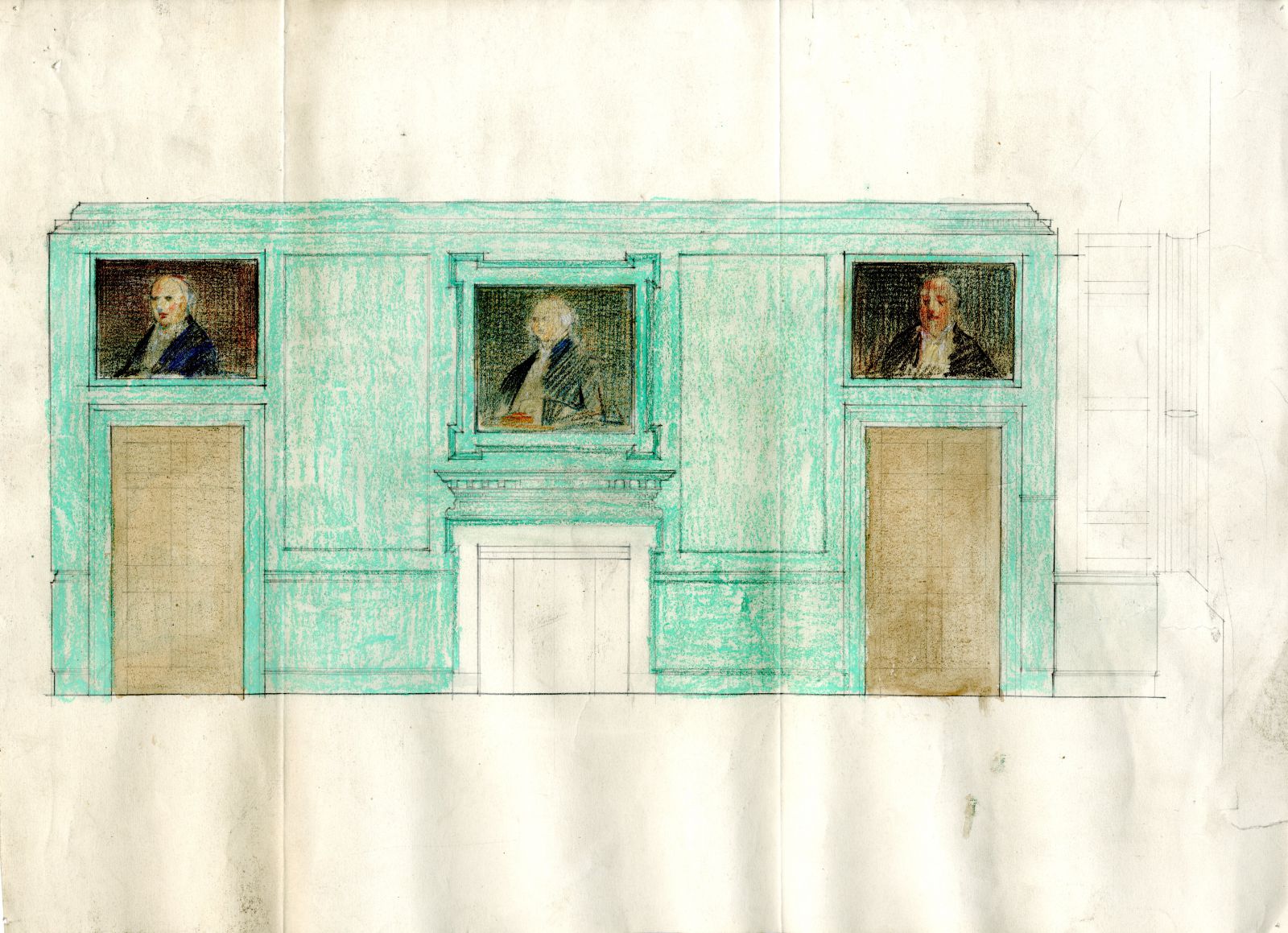 A further aspect to Morley-Horder's alterations to the SCR included overhauling the decorative palette. As can be seen from the drawings, Morley-Horder clearly intended to repaint the walls in green, although no reference in the documentation mentions what colours the SCR had been painted previously. However, the background to this portrait of John Campbell Watt (Fellow 1880 - 1931) which was painted in 1924, clearly shows the same arrangement of prints and furniture in the SCR as is shown in the early 1920s photograph. Importantly, it also shows what is likley to be the only colour image of the previous scheme. 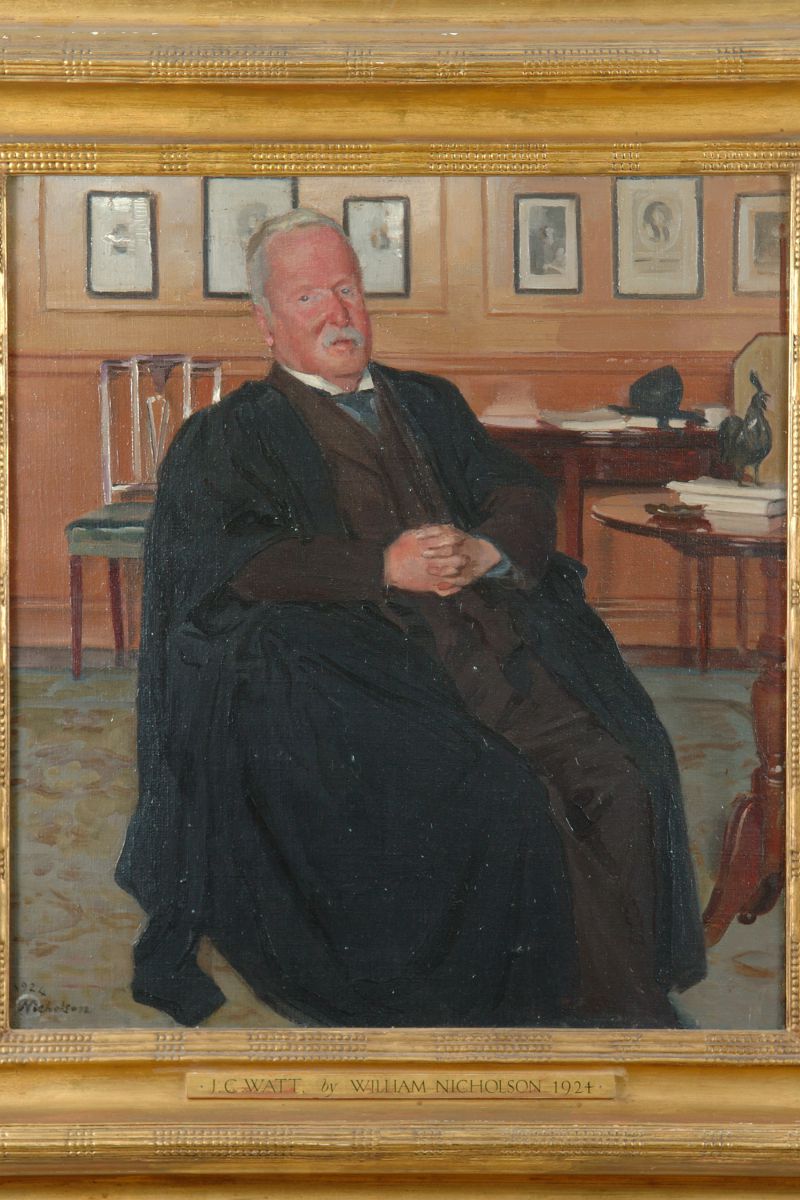 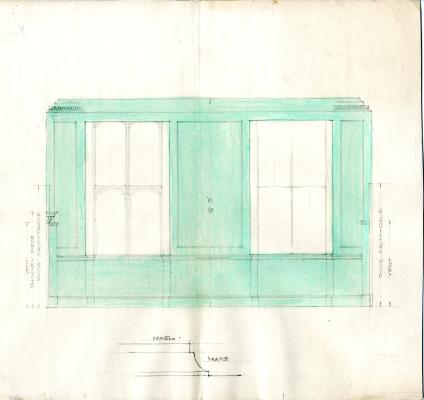 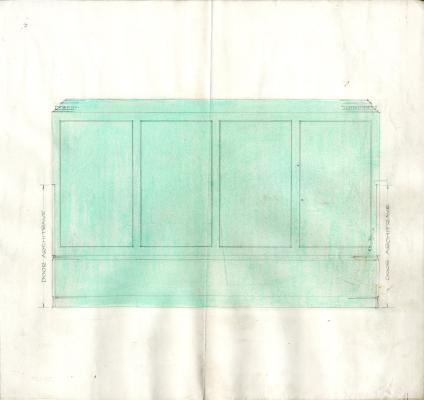 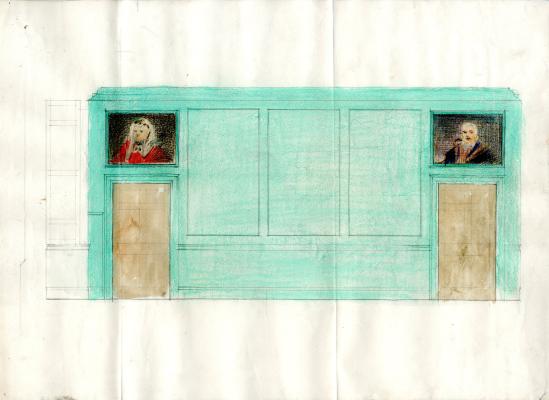 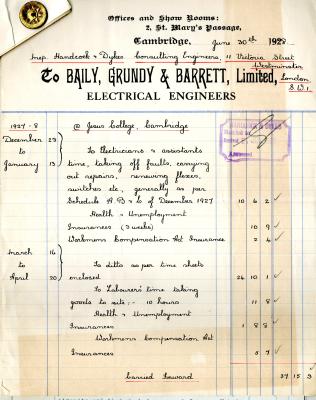 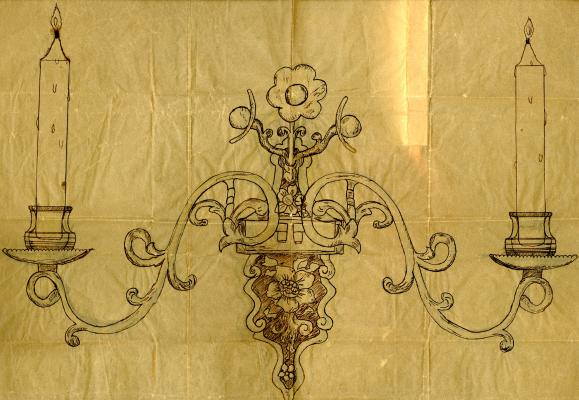