Archive of the month: The Cricket Pavilion

Certainly the most striking building in the College grounds, the cricket pavilion has been providing shelter to cricketers and spectators since 1924.

Designed by Percy Morley Horder, plans for the appearance and location of the pavilion underwent various iterations before the current design was decided. Morley-Horder was no stranger to the College, having been responsible for the construction of new student accommodation, now known as M and N staircases.

He later designed and oversaw construction of yet further accommodation blocks on the south and east sides of Chapel Court between 1929 and 1930.

This plan showing one previously considered concept, suggests incorporating the new pavilion into an extension to existing College buildings as part of an unrealised scheme to build a new accommodation block on the north side of Chapel Court. 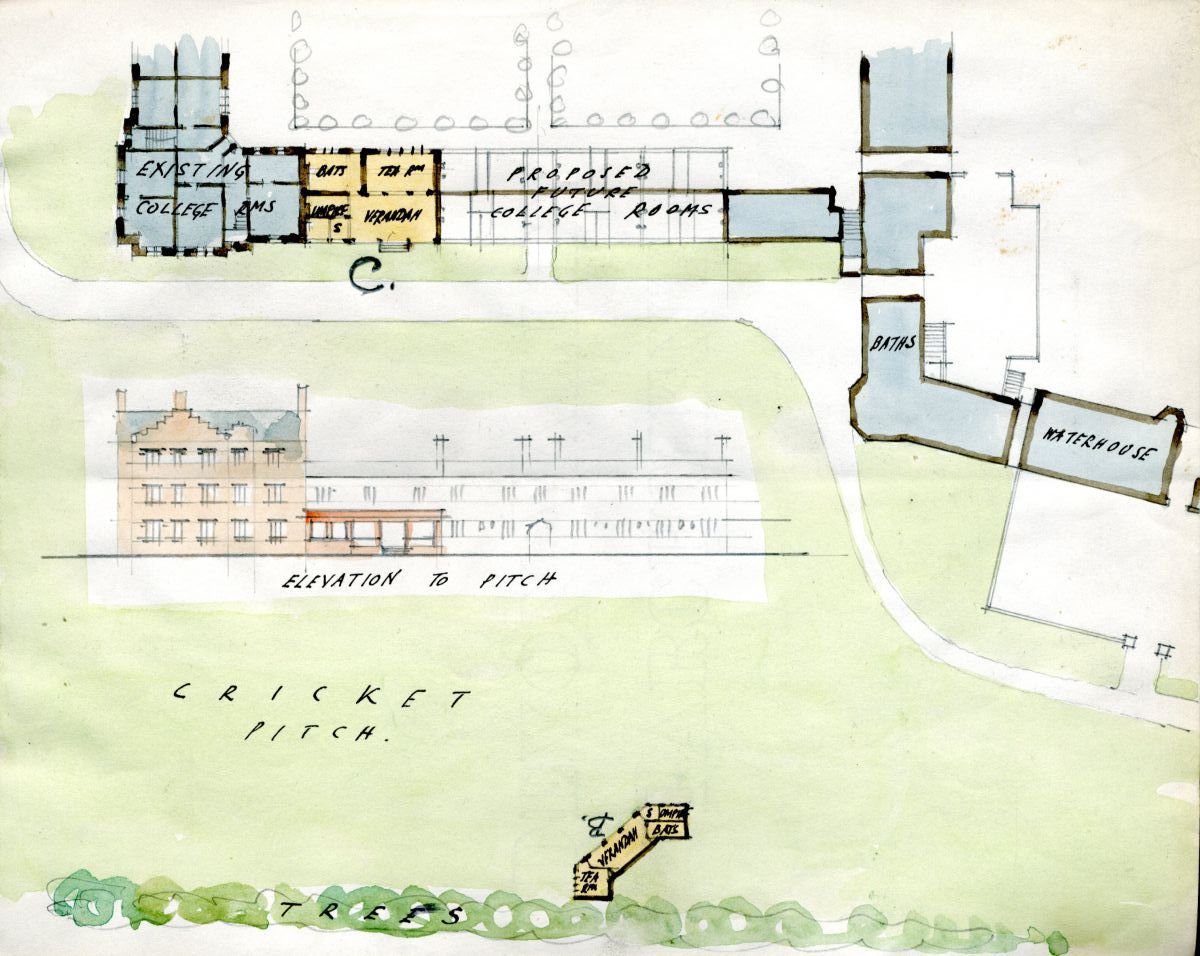 Morley-Horder’s thoughs on this was that the pavilion would be better positioned for access to necessary facilities, both changing rooms and catering, with a view over the cricket field that would allow spectators to watch games without having the sun in their eyes. The lower estimates for construction costs by building the pavilion as an extension to existing buildings rather than building something from scratch was also a consideration.

The earliest reference in the council minutes relating to the Pavilion appears to be on the 16th March 1923 where it is noted that Morley-Horder is given permission to approach Mr George Kett, of reknowned Cambridge builders Rattee and Kett, and a Mr Saint for estimates as to the cost of executing of his designs for the cricket pavilion. Mr Kett’s estimate for £1547 was agreed to, although only following a debate between Morley-Horder and the then bursar, Bernard Manning. Manning was concerned that the estimate was too high, but Morley-Horder insisted that it was accurate for a building of the highest quality. 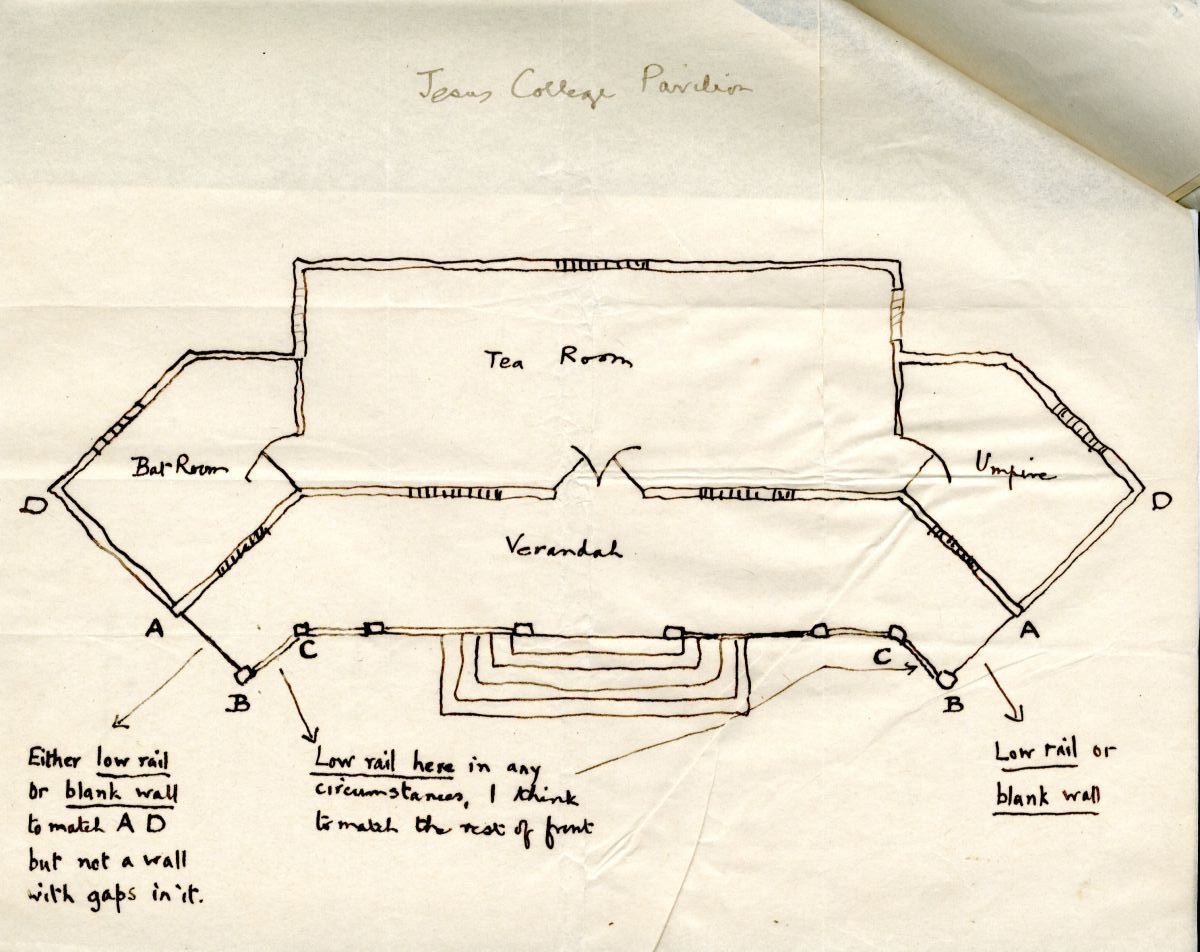 Manning, however, appears to be responsible for determining the final site of the pavilion. As can be seen in this letter, Morley-Horder himself said ‘I have found it difficult to reconcile myself to the necessity of placing this (the pavilion) so oddly in the field’. Morley-Horder did concede though that ‘if the pavilion is carried out in thatch and elm boarding it will certainly be of a quite quiet and unobtrusive character’. The elm boarding, however, appears to have only lasted for five years before being replaced by oak boarding in February 1929, also supplied by Rattee and Kett. 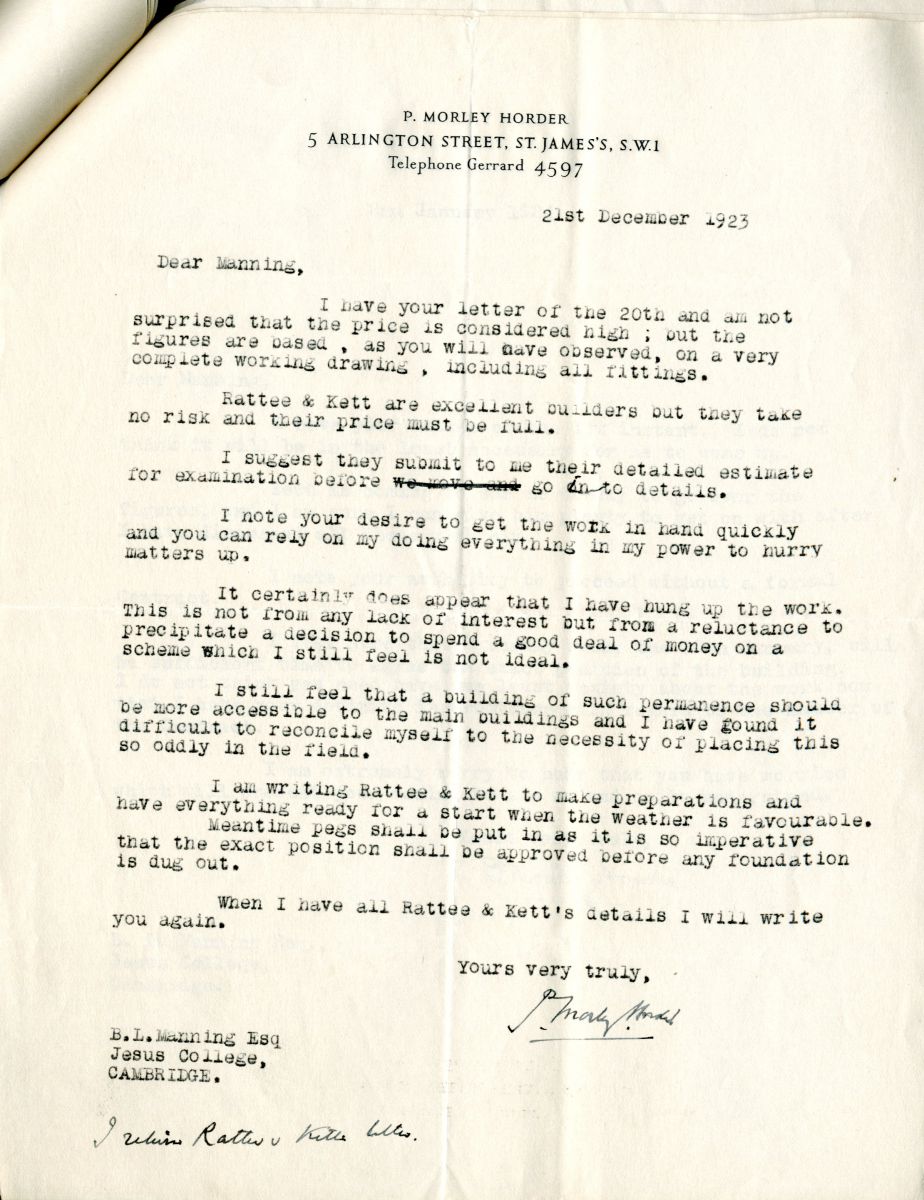 Morley-Horder’s designs were accepted by Council on 19th December 1923, and construction work started at the beginning of 1924 with the thatching commencing on 31st March 1924. It is interesting to note, however, that the distinctive thatched roof on the pavilion was not considered from the outset and that a letter dated 17th December 1923 between Morley-Horder and Manning also suggests that using ‘old tiles’ was considered. The pavilion is now, however, unique in Cambridge as being the only building in the city with a thatched roof.

The final invoice for work done, dated August 1924, shows that the original estimate was not too far off with the final bill coming to £1581 2s. A supplementary £71 16s was spent on custom made furniture including four tables, eight benches, eight stools and one ‘two drawer table’. This extract from the final bill details some of the specific costs involved with the construction of the pavilion.

The Pavilion was extremely well received upon its opening, being described in the 1924 Annual Report as a ‘most usefully planned building’ and very much an improvement on the temporary tents and marquees that had previously been used.

However, a later comment in the 1927 edition of the then College magazine Chanticlere notes politely that a lack of toilet facilities was leading to a post refreshment rush by cricketers to behind the new pavilion. A letter dated 9th March 1924 from Morley-Horder, does mention that providing proper facilities could only be done at ‘very great expense’ making it unfeasible considering the budget for the project. This problem of a lack of facilities was only addressed in 2005 when the pavilion was extended.