The Priory of St. Radegund was founded by the community of nuns that established itself on the College site in the mid 1140s thanks to a generous bequest of four acres from Nigel, the Bishop of Ely.

This land was further supplemented with donations from other significant benefactors, including Malcolm IV of Scotland (in his guise as Earl of Huntingdon), Constance Countess of Toulouse and later Bishops of Ely, whilst various donations of estates and properties were made to provide income. The nuns developed the site to suit their needs and growing community, so that at its peak the conventual buildings roughly extended to the same footprint as the current historic core of the College. However, by the mid 14th century a combination of the declining popularity of the Priory (nearby Denny Abbey was more ‘fashionable’) and the long term effects of the black death on income from estates led to its slow decline. This led to its dissolution in 1496 by John Alcock, Bishop of Ely, who founded Jesus College on the same site.

Although the development of the Priory site and estates has been discussed in various publications, not least in the Victoria County History, Arthur Gray’s The Priory of St. Radegund, Cambridge and an array of archaeological reports, relatively little relating to the daily lives of the nuns has been written. The following information gives us an insight into the daily lives of the nuns and shows how they would have lived in the Priory.

Monastic life focused on personal salvation through prayer: the nuns’ daily routine revolved around singing the psalms and prayers which made up the Divine Office.  These services began early in the morning and continued throughout the day, with seasonal variations.  A summer schedule of services in the church of St Radegund’s nunnery looked something like this:

7.00 am Meal of bread and ale in the Refectory

12.00 noon Dinner in the Refectory

6.00 pm Supper in the Refectory

Although no devotional texts or other books that may have been owned by the nuns survive in the College’s collections, manuscripts from the College’s Old Library give us a good idea of the type of text which they might have encountered. 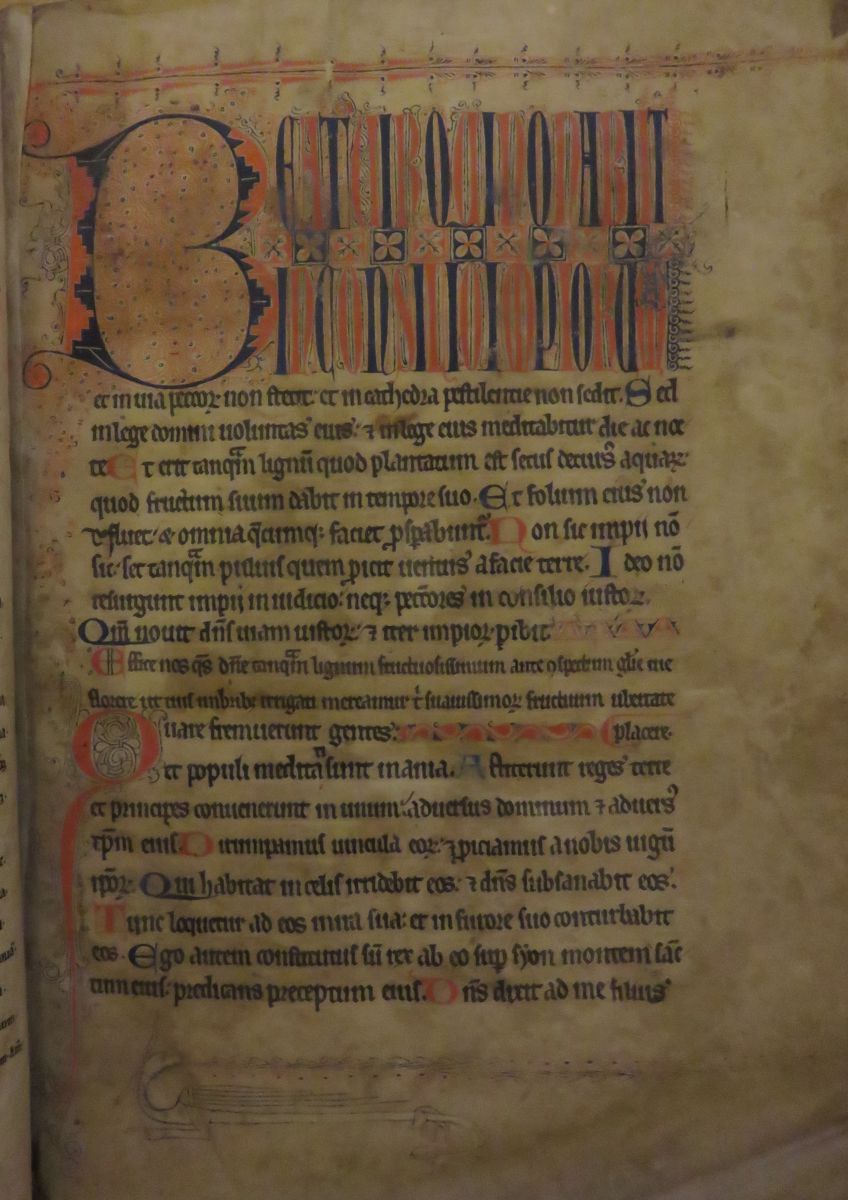 This Psalterium (ref: JCOL/Q series/Q.B.1-27/Q.B.4) is possibly from an Augustinian House. It contains psalms and canticles, preceded by hymns and followed by the litany, "sequences" and "Virgo gaude". Names of saints in the litany have been altered to match the Sarum form. The "sequences" include music for the first verse of each of them. The end flyleaf is from a 13th century missal and its contents include the proper prefaces for Easter.

Clasps from devotional books often seem to have fallen off, but an example found during excavations in the College give an indication as to how one might have looked. 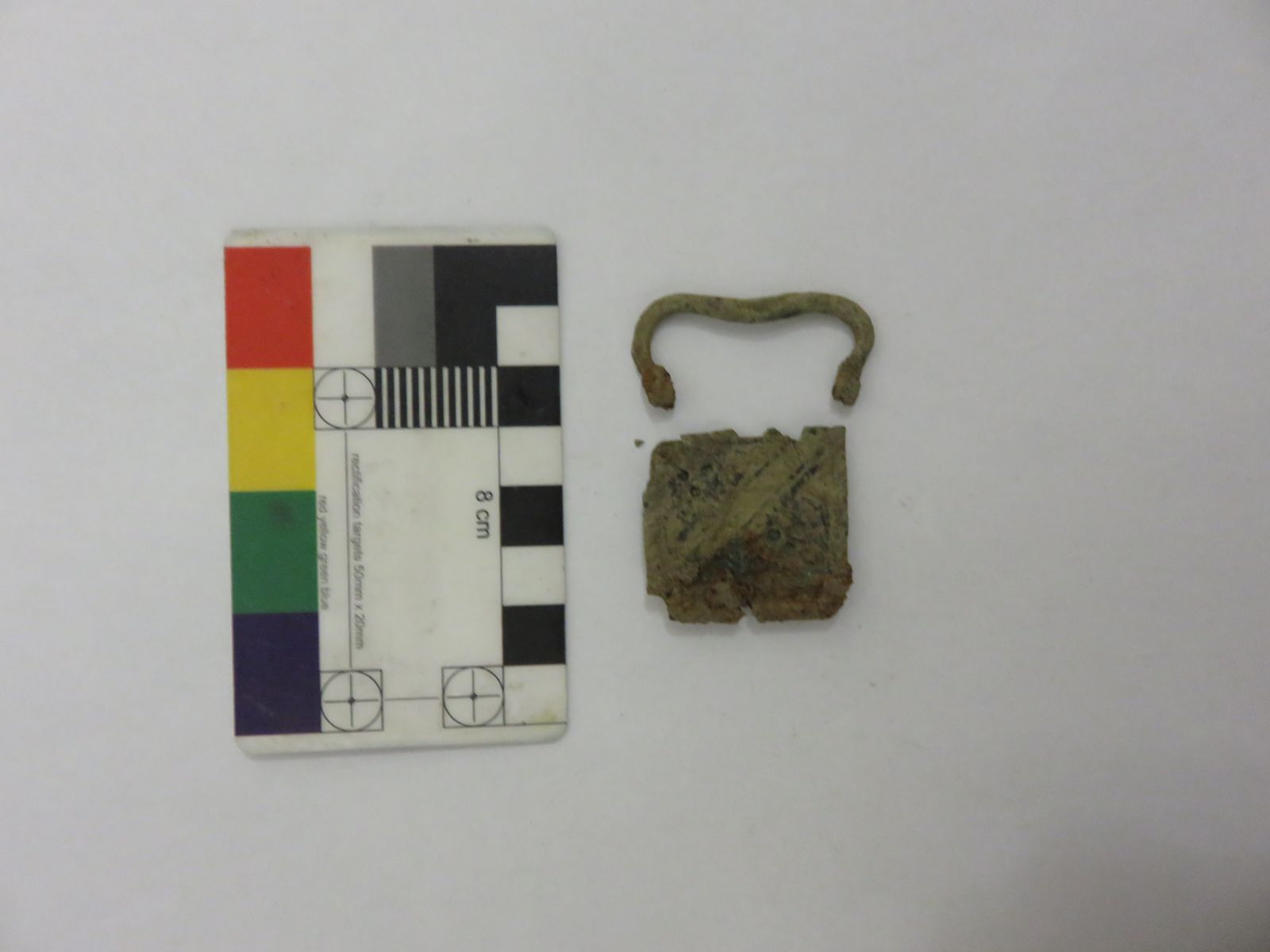 This, possibly medieval, clasp (ref: JCARCH/JES98/011) was found during excavations undertaken prior to the construction of the new block of accommodation that makes up the southern side of Library Court in 1998. Objects associated with literacy are common archaeological finds from male monastic houses, but they are very rare from female ones.

Diet in nunneries was fairly simple in comparison with the richer fare served in wealthier monasteries of men.  It was perhaps closer to that of the more prosperous peasantry, based around cereals (bread and pottage), fruit and vegetables, fish, dairy produce, beef and bacon.  Historical sources suggest that grain made up a substantial element of the nuns’ diet (for bread and ale), and large quantities of salt were purchased to preserve meats. Food was bought from urban markets, supplemented by fruit and vegetables produced in the nunnery’s gardens. Meat was prohibited during Lent and on fast days, so that fish or dairy was the main source of protein for the majority of meals across the year.

Archaeological evidence from nunneries complements historical sources and identifies foodstuffs that were not recorded in documents.  For example, excavations at Denny Abbey (Cambridgeshire) recovered seeds of elderberry, blackberry, fig and grape from the abbess’s latrine.  Animal bones from excavations at Polsloe Priory (Exeter) showed a predominance of beef over mutton, while the aristocratic nunnery at Winchester yielded archaeological evidence for farmed and wild game, and 20 species of fish and bird.

The animal bones discovered during excavations on the College site are illustrative of both the typical food stuffs eaten by nuns and reflect the food types listed in the three surviving account rolls for the nunnery held in the College Archives. Amongst the 1.5 kilograms of animal bones found on the College site that date from this period, examples were found of chickens, fish, pigs and piglets, cows and sheep.

The earliest account roll (ref: JCMR/Gray 11-17/Acc. 1-3/Acc. 1) that is known to survive for the Priory of St. Radgeund covers the years 1449-1450 and includes information relating to all aspects of life in the Priory such as payments for fuel, alms and clothing whilst it also records income from rents. In addition to this, there are also detailed records of the amounts spent on food.

Food listed as having been bought by the nuns includes bread, beer, the flesh of cows, pigs, sheep, veal, piglets, chicken, fowl, lambs, butter and fish.

There are also references to individuals who worked for the Priory. Some of the women listed include Elianore Richemound (a handmaid), Elizabeth Chaterys (another handmaid) and Dionisie (the yardwoman). Those listed who provided goods and services to the Priory include Katherine Rolff for delivering straw and for hoeing in the garden, Alicia Rooper for providing cords for carts, Alicia Smalbon for processing wool, Margaret Whyte for dipping animal skins and Alicia Pavyer for selling containers.

Tenants included Lady Margaret Huntyngdon, who rented a tenement called the Sword, and Alicia Hynton who rented land in Coton.

The accounts, are mainly written in Latin, however, it is apparent that the scribe was not necessarily familiar with terms for all occupations or objects. This is particularly noticeable in a list of farming and gardening equipment bought by the nunnery, where items such as ‘pitchfork staves’, a ‘horse comb’ and ‘oxbows’ have been written in English.

A bell summoned the nuns to meals in the refectory, in the north range of the cloister.  Before each meal, the nuns undertook ritual hand-washing at a laver located in the cloister walk. During the meal, a nun read spiritual texts from an elevated pulpit; otherwise, silence was maintained during the meal.  The nuns were seated according to seniority, with the prioress and senior nuns seated on a raised dais at the eastern end.  The floor of the refectory and other monastic buildings would have been paved entirely in ceramic tiles, possibly with green-glazed examples of which have been discovered in College (ref: JCARCH/JCH10/15-16 and JCHR/5/1/1). Two of these fragments of floor tiles were found in excavations on the College site that took place in the Chapterhouse area in 2010 and during replastering work in Cloister Court in 2017. Although it is not possible to determine exactly where they came from they are late medieval in date and are likely to have been part of the floor of a relatively high status area, quite possibly the nuns’ refectory.

The medieval refectory of St Radegund’s occupied the upper hall of a two-storey building, with cellarage (storage) located beneath.  This arrangement was characteristic of English nunneries and held iconographic significance for religious women.  The upper storey refectory referenced the ‘upper room’ (coenaculum) where the Virgin Mary, Mary Magdalene and the other Holy Women worshipped with the Apostles after Christ’s death (Acts 1.13-14).  This biblical archetype was an appropriate model for the one monastic setting in which scriptural learning for women was encouraged. 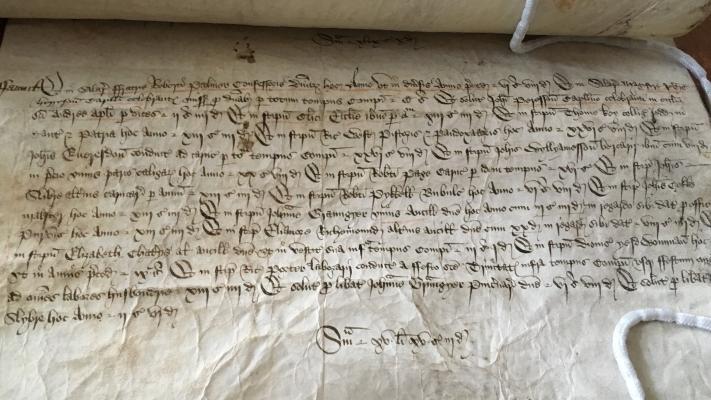 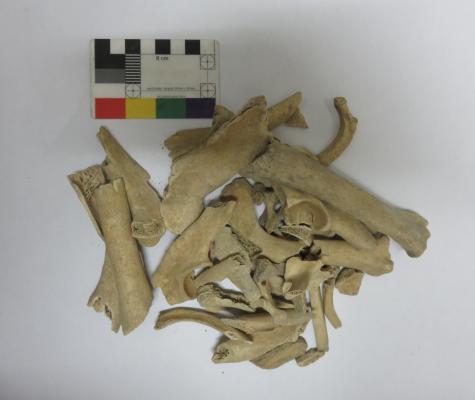 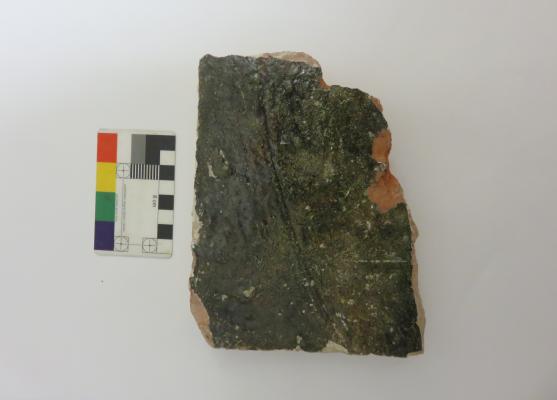