By the early 19th century, it is clear from the College Archives that the direct involvement that women had in the College had been much reduced.

There is no evidence of any women working for the College in a professional capacity and so it appears that women were, generally, supporting the College either as bedmakers and kitchen help or through their roles as daughters or wives of the Master.

The following page discusses aspects of the lives of the daughters of two of the Masters of the College; William French (1820 – 1849) and Henry Morgan (1885 – 1912) and, through the scrap books compiled by the daughters of Henry Morgan, the leisure activities of College staff.

William French was made Master of Jesus College in 1820, the year before he married Elizabeth Wythe in Eye, Suffolk. At this time, only the Master was permitted to marry and it was not until 1882, when the relevant University statute was altered, that Fellows were permitted to do the same. William and Elizabeth had two daughters: Anna Maria and Mary Valence.

Anna Maria French (c.1824 - 1866) was born in the Master’s Lodge at Jesus at some point in 1824. Relatively little is known about Anna other than that she does not appear to have married but was listed as a ‘landed proprietor’ in her own right in census returns. She died aged 43 at 42 Gloucester Terrace, London (her sister’s house) and was buried near her parents in Brockdish, Norfolk on 23rd December 1866.

Mary Valence French (c.1826 – 1889) was, like her sister, born in the Master’s Lodge. She married Edward Kay (later Sir Edward and a high court judge), on 2nd April 1850. Following her death, Sir Edward left £4,500, to perpetuate her memory, to the College for the foundation of several ‘Lady Kay’ scholarships in divinity.

This love letter, written to 'Miss French' by George H Russel in April 1838,  which survives in the personal papers collections of William French (Master of Jesus, 1820 – 1849) is addressed to one of his daughters, most likely Anna Maria, who would have been aged about 14 when the letter was written. It has not been possible to identify who George H Russel was, but as the letter was intended to reach Anna Maria at a friend’s house in Fulham and was then redirected to the Master’s Lodge at Jesus, it is possible that it was intercepted and was never received by her. 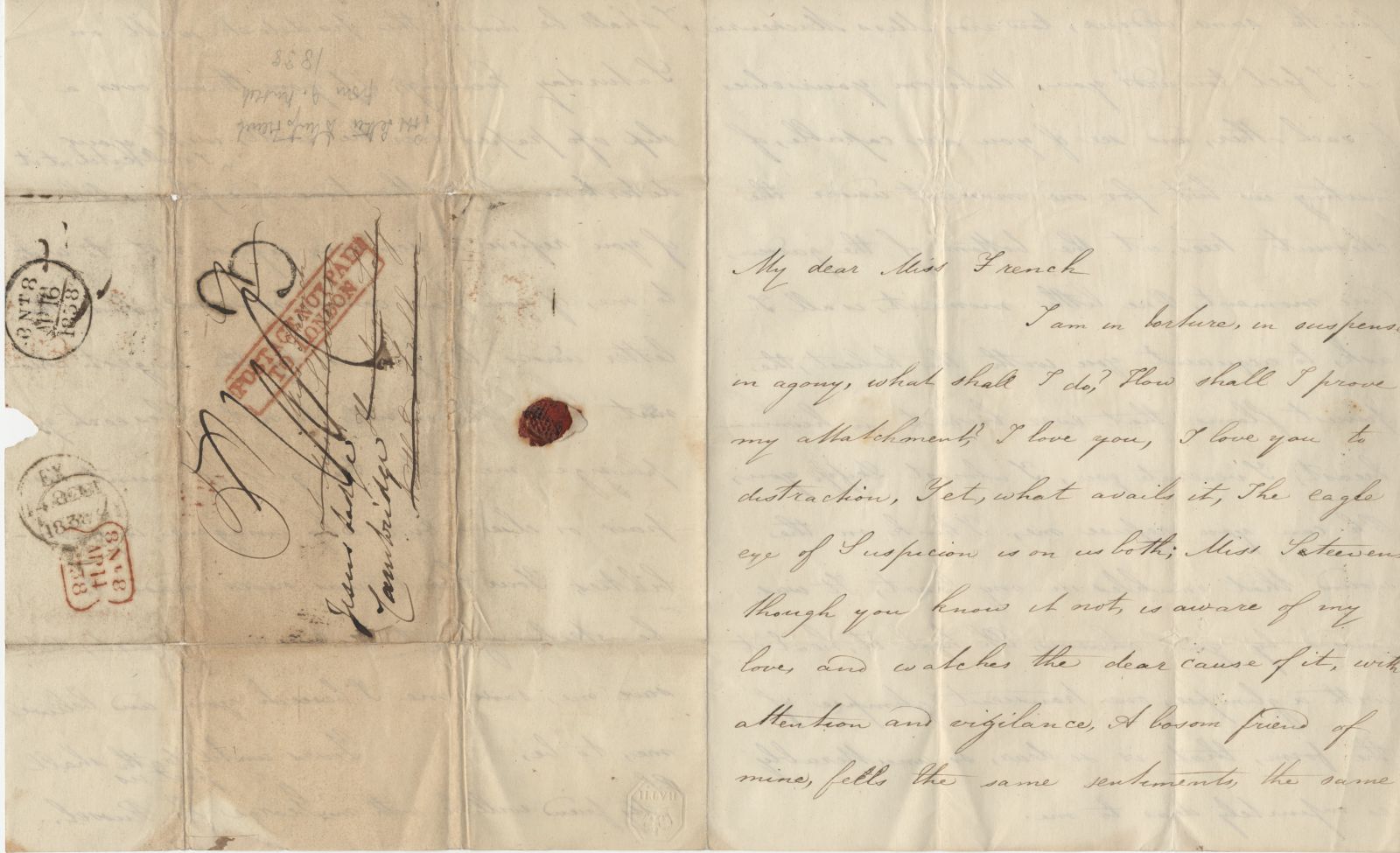 This red volume contains a copy of the trust deed for the Lady Kay Scholarship founded by Sir Edward Kay in memory of his wife in 1890. The accompanying letter dated 23rd May 1890 and shown in the image gallery (note the black border denoting mourning) to the Master of the College, Henry Morgan, reads “I am very desirous of leaving some permanent Memorial of Dr French and of his daughter my dear lost wife in the College where they spent so much of their lives and for which they had so strong a regard”. 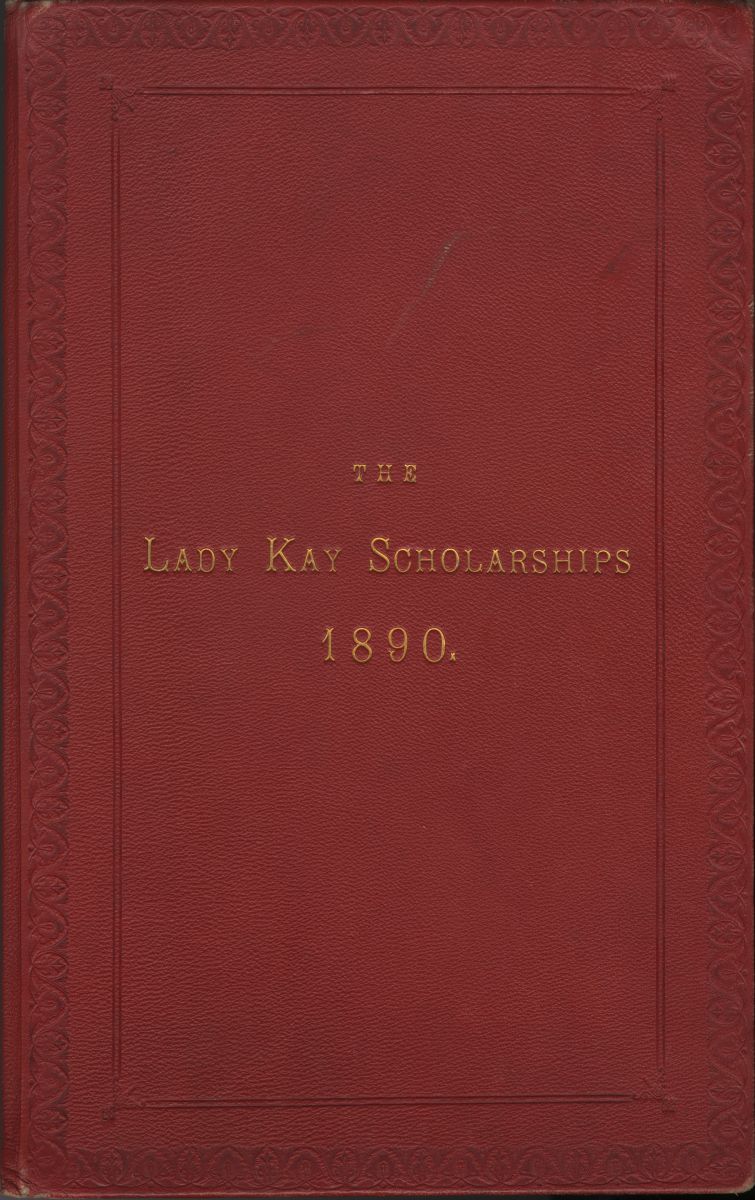 As they grew up, the daughters became increasingly involved in the social aspects to College life, recording this there are a series of seven scrapbooks, from which the photographs shown in the image gallery are taken. They also developed an interest in College history, with the eldest two, Iris and Gerda, writing The Stones and Story of Jesus Chapel Cambridge in 1914. This was dedicated to their father who died two years before publication, and it is still an extremely useful reference work relating to the history of the College. The illustrations were by Iris, whilst the text was written by Gerda. 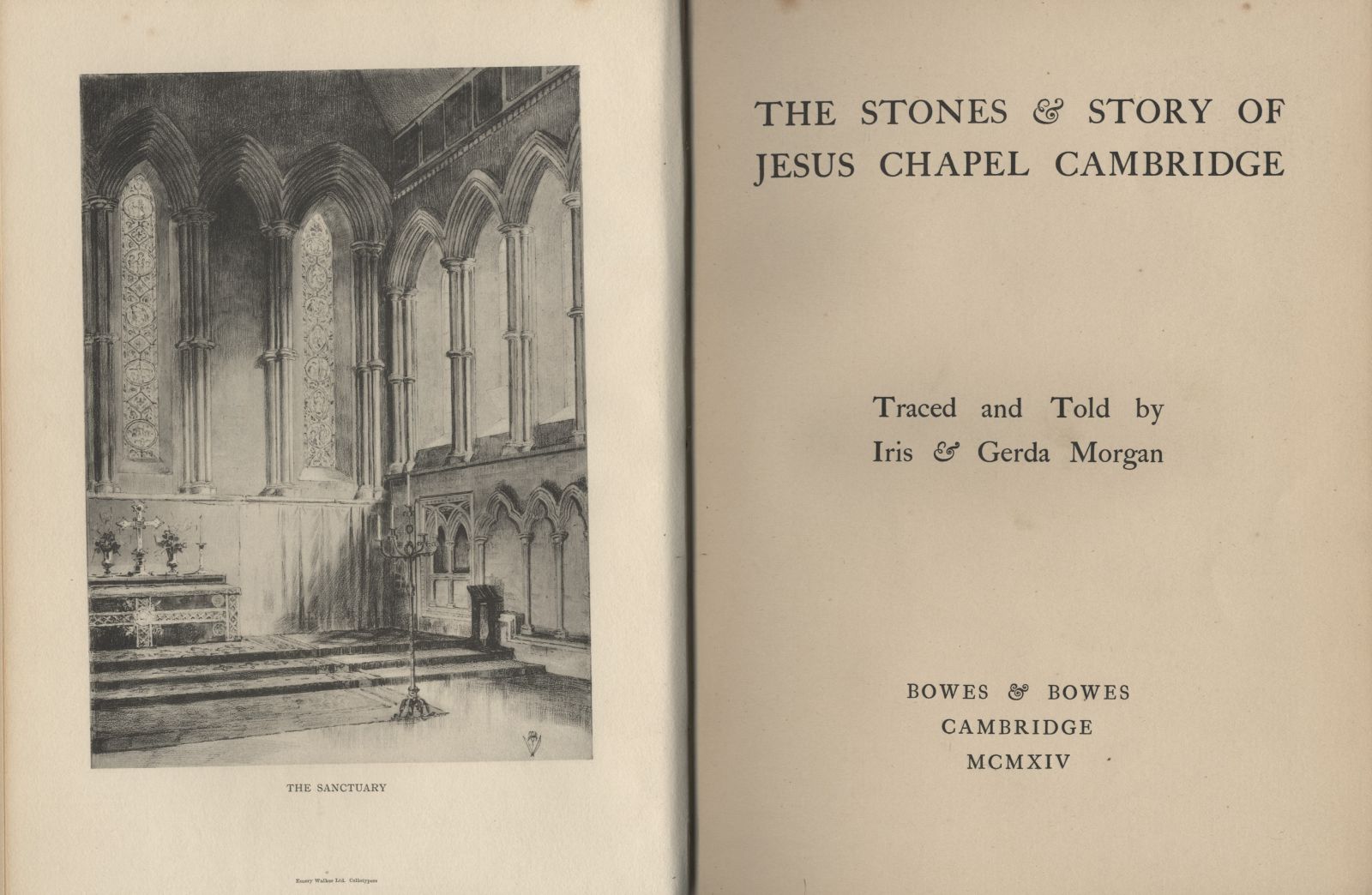 Following their father’s death in 1912, the family moved to 12 Cheyne Gardens in Chelsea and were involved with the British Nurses’ Association, but unfortunately little else is known about them. Blenda was the last of her family line as there was no issue from any of the 5 children.

The scrapbooks (ref: PP/Morgan) contain a mixture of photographs, cuttings, programmes, water colours and letters relating to the sisters’ involvement with the College and the events that they contributed towards. Of particular note are the photographs below showing a staff fun day in 1908 in which the daughters of the Master, bedders and kitchen help can all be seen enjoying the day’s activities.

As can be seen in the photographs, the bedders are all wearing what is known as a 'bedders bonnet'. The example of a bedders bonnet shown here (ref: 196.75) is held by the Museum of Cambridge and is of a type worn until the 1920s. On the occasion of holidays and special events, it appears the bonnets would be trimmed with decorations such as flowers and feathers, as can be seen in the photographs in the scrapbook shown below. 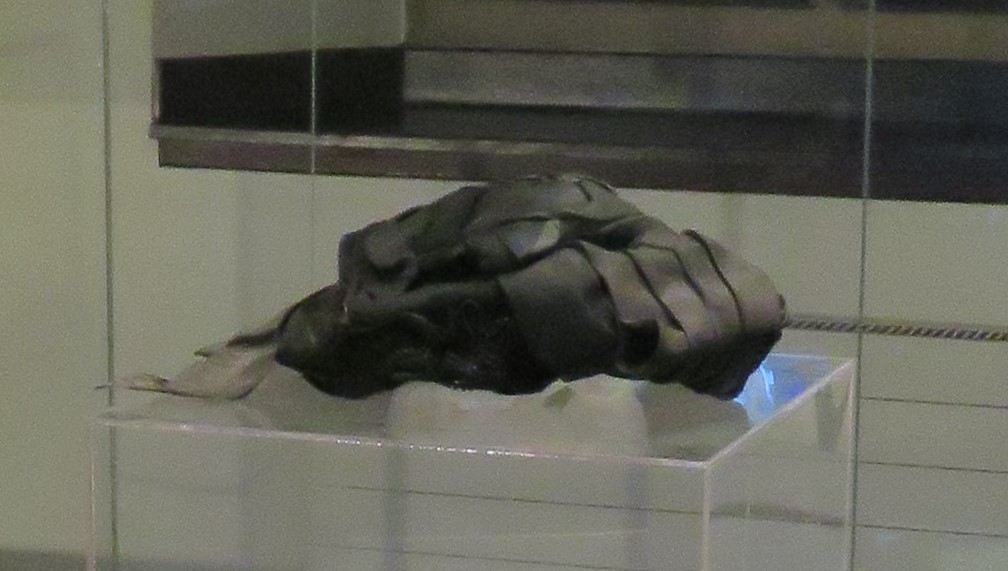 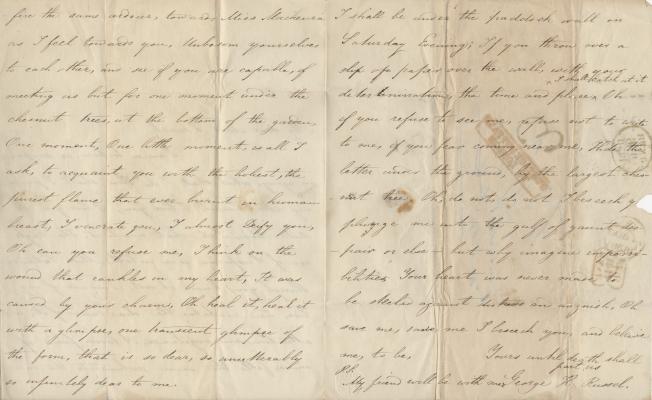 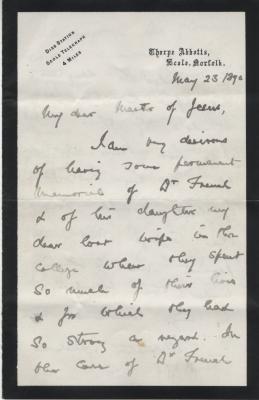 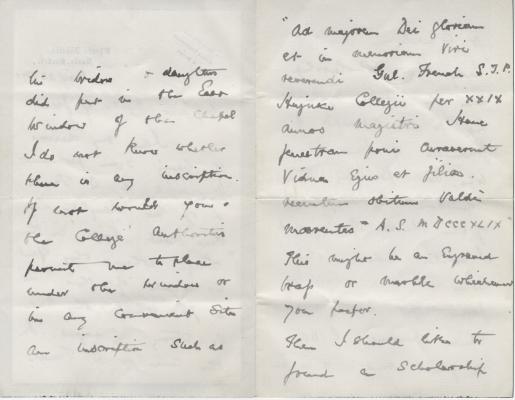 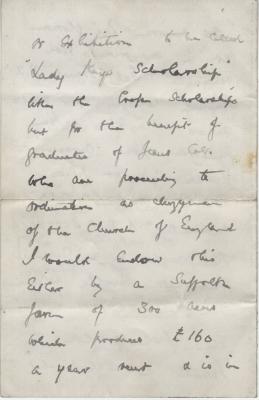 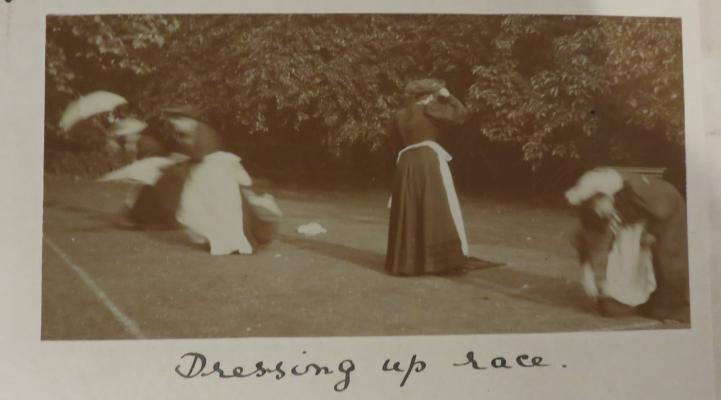 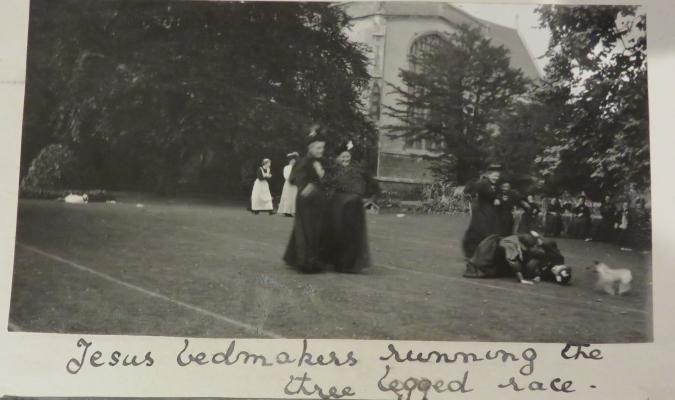 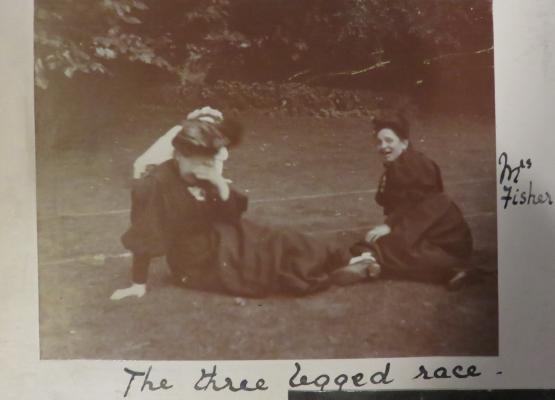 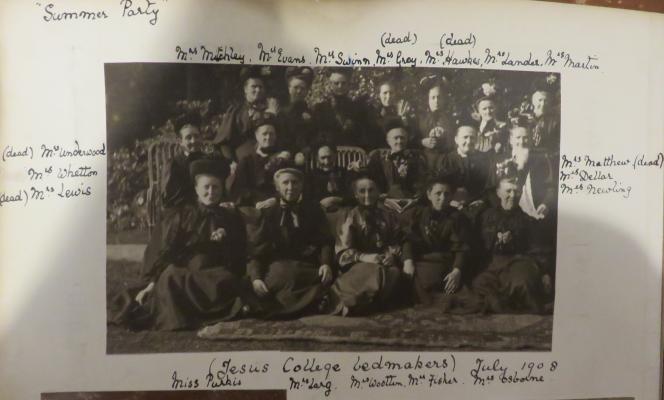