Archive of the month: "your old scholar and bedman"

In addition to the main runs of documents in the College Archives, there do survive the occasional one off items, such as this letter written by Reginald Haspys.

The following is a transcription of the letter

Ogle chaplyn to my lord

…her forth be yis by ll dd 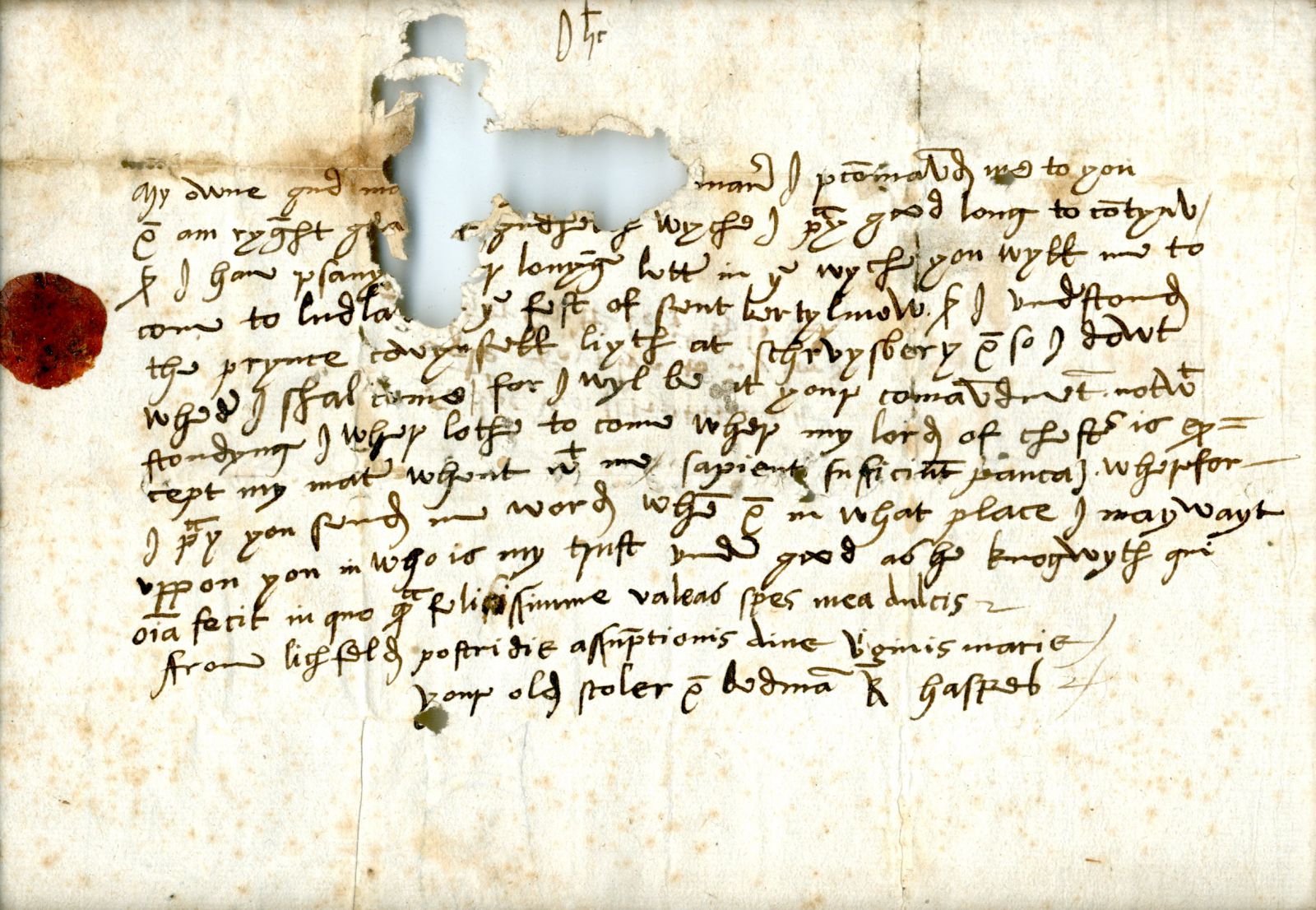 Written on 15th August (denoted by the reference to the Assumption of the Virgin Mary), the letter appears to have been sent by Reginald Haspys to Humphrey Ogle.

As a Fellow of St. John’s from 1529, Reginald does not appear to have an immediate connection to Jesus College. However, in 1521 he became vicar at St. Clement’s Church, one of the College livings, where he remained until his death in 1531. Prior to this, he also appears to have been the vicar at St. Peter’s Church, Harborne, now a suburb of Birmingham, but once in Staffordshire. The letter surviving in the Archives has most likely been retained due to both its age and historic interest, as suggested from the double sided glass frame in which it has been secured (which looks to be about 75 to 100 years old).

The letter further indicates at the relationship between Haspys and Ogle, reflecting the accommodation arrangements common in Cambridge at the time of Haspys’ education in that students (“your old scholar”) would often sleep in the same or adjacent rooms as their tutor (“& bedman”).

In addition, they both hailed from Lancashire so they perhaps knew each other from home before coming to Cambridge. Indeed this possible connection may have led to Reginald coming to study in Cambridge in the first place, knowing that Ogle was already there to guide him through his studies. Further confirmation of Ogle’s connection to Lancashire and the places referred to in the letter are reflected in the areas he supported when he left £100 to Brasenose College, Oxford to support two scholars from either Prescot Grammar School, Lancashire or from the diocese of Chester, and Lichfield and Coventry.

The specific dating of the letter is, however, difficult. Certainly the use of the phrase ‘prince consort’ (which was still used in the 16th century to denote the son or grandson of a reigning monarch) and the suggestion that the prince consort “lyeth in Shrewsbury” hints at the death of Arthur, the older brother of Henry VIII, on 2nd April 1502. However, Prince Arthur and Katherine of Aragon were living at Ludlow Castle at the time of his death and it is widely understood that his body remained at Ludlow before being moved to Worcester. His body being moved to Shrewsbury, therefore, seems odd as it is about 30 miles north of Ludlow and in the opposite direction to Worcester. Of course it could be that, being in Lichfield, Haspes had misunderstood where Prince Arthur’s body was lying before being moved to Worcester. The further reference to ‘My Lord of Chester’ might refer to Henry VIII when made Prince of Wales after his brother’s death, the title Earl of Chester being assigned to the Prince of Wales since the 14th century.

However, if this is the case, Haspys seems to be writing to Ogle eleven years before he received his degree (BA, 1513-4)  and three years before Ogle received his (B. Can. L. 1505-6). This is not of course impossible but there are no surviving records in the College Archives for this time that can confirm when they might have been in residence. The fact that the place names mentioned in the letter also correspond to locations where both Ogle and Haspys were clergymen, something they could only have been once they had received their degree, is another confusing anomaly if the letter does indeed refer to the death of Prince Arthur.

A copy of Haspys’ will survives in the series of wills in the Vice Chancellor’s Court records in the University Archives so we know that on his death in 1531 he became a benefactor to Jesus College when he left ‘a mayle for my pencyoners’ at the College, a mayle possibly being a coin in use at the time and pensioners being a classification of type of fee paying student. This in itself perhaps indicates that he developed a teaching relationship with the College whilst vicar at St. Clement’s.

If you have any thoughts about the dating of this letter, please contact the College Archivist at archives@jesus.cam.ac.uk