Archive of the month: Sir Thomas Knyvet and the Gunpowder Plot

This weekend saw fireworks and bonfire night events taking place across the country, commemorating the foiling of the Gunpowder Plot in 1605.

Indeed, the College has a direct connection to the plot through Sir Thomas Knyvet who, in his capacity of Keeper of Whitehall and Westminster Palaces, led the search and discovered Guy Fawkes in the vaults under Westminster.

Sir Thomas Knyvet was the second son of Sir Henry Knyvet of Charlton, Wiltshire and was made a Fellow Commoner of Jesus in 1564. The only reference we have to Knyvet in the College Archives comes from the College accounts which shows receipt of his 20 shillings admission fee.

Following his departure from Jesus in 1565, Thomas was admitted to Gray’s Inn in 1566 and within a few years was a member of the Privy Council and MP for Westmorland. He held various other positions within government and the Royal household, being made a Justice of the Peace for Middlesex in 1583 and an MP for Westminster in 1584. In 1597, he married Elizabeth, the daughter of Sir Rowland Hayward.

Coincidentally, the Knyvet’s London house was on the site of what is currently Downing Street, including the Prime Minister’s residence at No. 10.

Being keeper of Whitehall and Westminster Palaces in 1605 meant that Knyvet was responsible for security of the premises and as such undertook a search of the Palace of Westminster with his colleague and friend Edward Doubleday. This was prompted following the receipt of a letter by William Parker, Lord Monteagle from Guy Fawkes (now held as part of the State Papers Domestic series at the National Archives) which included the threatening line “they shall receive a terrible blow this parliament and yet they shall not see who hurts them”.

The search, which took place at around midnight on Monday 4th November 1605, involved examining the rooms and storage areas under Westminster Hall (an undercroft at ground level rather than basement rooms) which, on opening of parliament the following day by James I, would have contained the King, MPs and Lords. The plotters believed the country should be Catholic rather than Protestant and so they felt killing a majority of those people who governed the country would make this possible.

Knyvet encountered Guy Fawkes (at that point giving his name as John Johnson, servant to Thomas Percy) exiting a room containing what appeared at first glance to be firewood, but on closer inspection contained many barrels of gunpowder.

“This last Night the Upper House of Parliament was searched by Sir Tho. Knevett; and one Johnson, Servant to Mr.Thomas Percye, was there apprehended; who had placed Thirty-six Barrels of Gunpowder in the Vault under the House, with a Purpose to blow King, and the whole Company, when they should there assemble. Afterwards divers other Gentlemen were discovered to be of the Plot”

Following the capture of Guy Fawkes and his handing over to the relevant authorities, Knyvet does not appear to have been involved further, with the imprisonment, torture and subsequent execution of the plotters being carried out by other government officials. However, in 1607 he was raised to the peerage as Lord Knyvett of Escrick in Yorkshire, possibly for his involvement in discovering the Gunpowder Plot, but probably more likely for his long and loyal service to government and the Royal household.

Following their deaths, Knyvet and his wife were buried at Stanwell Church in Surrey although, as per their wills, in a far simpler tomb than the elaborate memorial that can be seen today which was likely installed by their descendants. 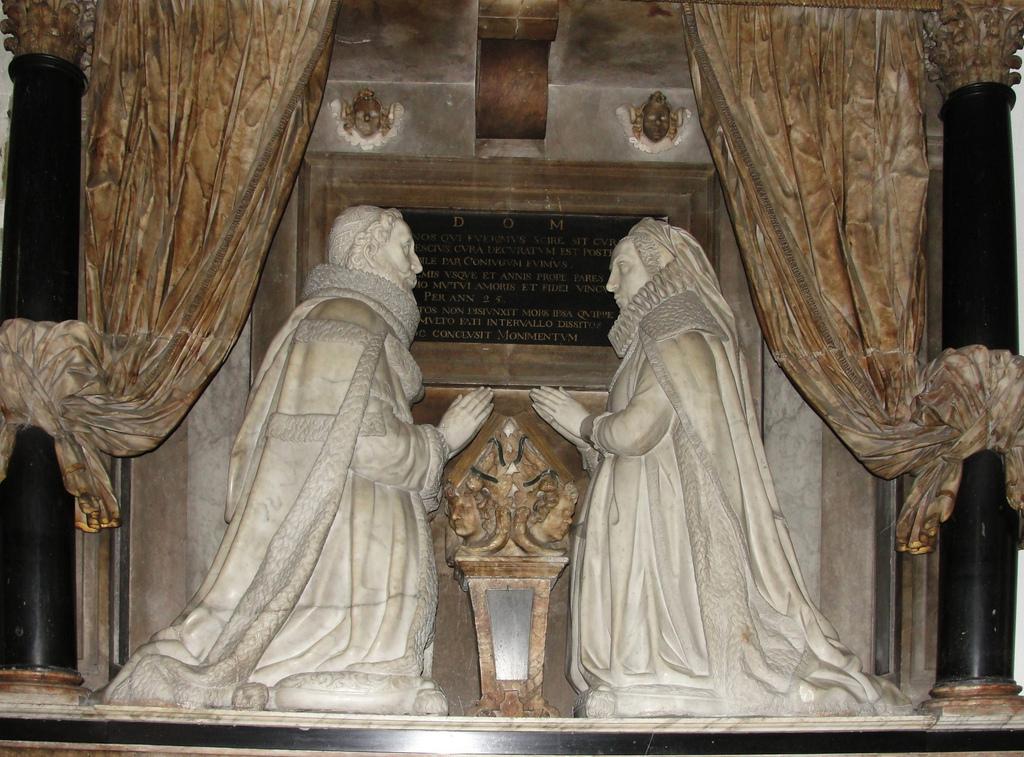 Following the uncovering of the Gunpowder Plot, a decree was immediately issued by the King declaring people should celebrate the discovery with the burning of bonfires. Initially, however, commemorations generally took the form of thanksgiving services in churches but these were soon replaced with the types of festivities more popularly enjoyed today.

Some of the earliest recorded bonfires were in the 1610s in Canterbury, Carlisle and Norwich although bonfires on the 5th November, really seem to have become popular towards the end of the 17th century. This appears to be tied in with the Glorious Revolution and the celebration of the birthday of William III which fell on the 4th November, enabling a double celebration for Protestant supporters.

Due to the obvious religious connotations, the earliest effigies to have been burned on the top of bonfires were originally in the image of the Pope, but possibly through a relaxation of attitudes towards Catholicism from the end of the 18th century, Guy Fawkes appears to have replaced the Pope as effigy of choice by the turn of the 19th century.