Archive of the month: The pensioners' tables Hall fund

In May 1830, the Master and Fellows agreed to a request to establish dedicated ‘pensioners’ tables’ in the Hall.

This request was received from the pensioners (fee-paying students) themselves who wanted exclusive use of some of the tables in Hall. Unlike the other students who were scholars and were supported from the income of the College, pensioners paid for their education and as such often expected to be offered a higher standard of living and better perks than those offered to the scholars.

The pensioners’ tables were to be laid with specially acquired silver cutlery, china, linen and glassware and it was agreed that in order to fund this, each pensioner would pay five shillings a quarter towards a ‘pensioners’ tables Hall fund’.

It is, however, also possible that an unusually large increase in numbers of pensioners during this period may have also contributed towards the demands for a specific pensioners' table. Between 1826 and 1830, 44 pensioners were admitted, possibly at the expense of student Fellow-Commoners (usually an affluent, often aristocratic, student who enjoyed the privileges of dining at high table with the Fellows), the fashion for which was dying out. Only two Fellow-Commoners were admitted in the same period, both of whom were well above ordinary student age.

This page from the College Council minutes for 1830, shows part of the list of requirements of the pensioners’ tables. Please see the image gallery at the bottom of the article to view the full list. 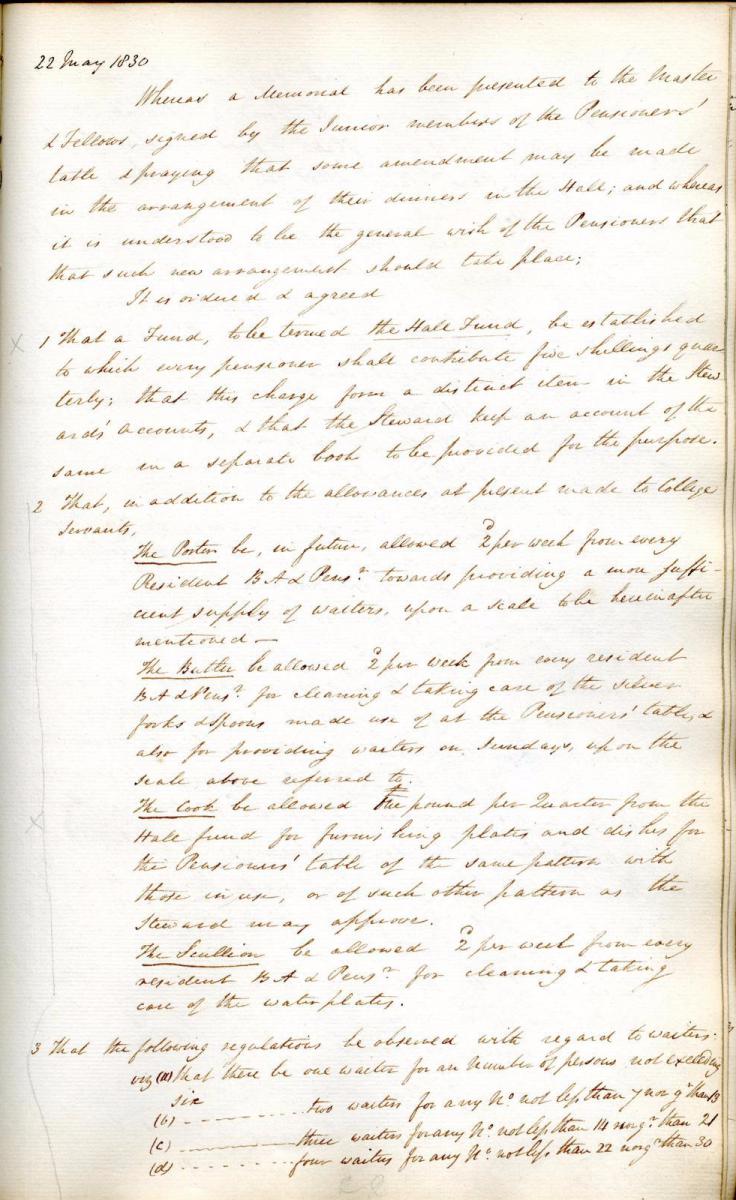 As can be seen, the College Steward was to be responsible for maintaining an account book dedicated to the pensioners’ tables Hall fund. The letter below was found inserted into this small volume of separate accounts and is signed by Henry Annesley Woodham, a classics and divinity fellow of the College who was the Steward at the time the pensioners’ tables Hall fund was closed.

In his letter, Woodham explains that soon after the levy of five shillings was introduced, it became apparent that this was raising too much money for the purpose even once all the desired cutlery and tableware had been purchased. Indeed the inference from the documents relating to the pensioners’ tables Hall fund is that there could be no justification in raising more money than was needed for the provisions of the tables.

So on the 18th December 1837, the fee was reduced to one shilling a quarter. However, even this lower rate raised too much money and it was thought it would be too administratively demanding to collect payments of lesser amounts.

As such, the decision was made to close the fund on 25th December 1842 and Woodham transferred the balance of the pensioners’ table Hall fund, £108.0.2, to the general Council account.

Due to the obvious benefit afforded to the College with this transfer of money it was declared that any decisions concerning the pensioners' tables made by Council had to first be agreed to by the pensioners. Please click on the letter to download a translation and for further notes on the people mentioned by Woodham. 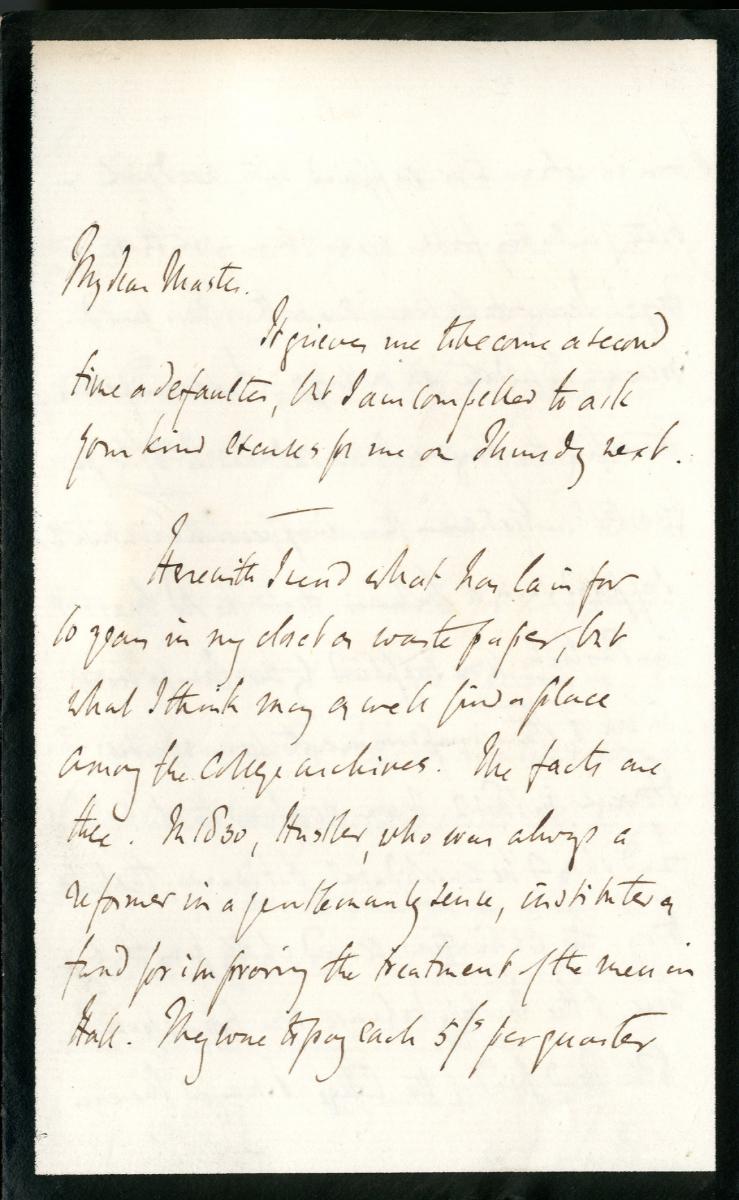 In addition to summarising the quarterly accounts of the pensioners' tables, the pensioners’ tables Hall fund account book also provides details of the individuals who were commissioned to supply the various silver and tableware for the table.

For example, it lists an ‘Armstrong’ who was responsible for providing a plate warmer to be shared with the parlour (now the SCR). This is likely to have been John Armstrong who, according to the London Gazette, went bankrupt in October 1833 and worked as a brazier in Cambridge.

Likewise, the volume includes references to ‘Barrett’ for plates and glass salts, a Mr. Burn for plates and dishes with a brown edge and crest, a Mr. Pryor later being employed for mending broken plates and tablecloths being purchased from ‘Rowe’.

Using Pigot’s directory of Cambridgeshire of 1830-1 and Robson’s commercial directory of the six counties forming the northern circuit of 1839, it has been possible to work out who some of these suppliers were. Barret refers to George and Robert Barrett who traded from shops on Market Hill and St. Andrews Hill, Henry Rowe was a china and glass dealer on Sidney Street in 1831 who is listed as having moved to Trinity Street as a ‘College draper’ by 1839, whilst Stephen Pryor was a tin-plate worker based on Petty Cury.

Unfortunately, none of the china that was commissioned for the pensioners’ table appears to have survived.

There is no documentary source in the Archives saying from whom the silver was bought, although we are lucky enough to have various examples of the silver surviving in the College.

The majority of the items have a hallmark which includes a leopard's head, the date letter 'p' and the makers mark 'W. C.', showing they were made in London in 1829 by William Chawner. There were various other active silversmiths working in London at this time with the initials W. C., but this positive identification of Chawner was made possible following some extremely helpful information provided by the Library at the Golsdmiths' Company.

In addition, it was highlighted the leopard's head appears slightly 'cartoon like' because the stamp used to make the mark would have been engraved by John Smith, the then London Assay Office’s engraver. Smith's eyesight deteriorated towards the end of his career and so lead to a decline in his ability to engrave marks in great detail.

All the cutlery still owned by the College that survives from the pensioners’ tables is inscribed with the line ‘in usum Pens: Tab: 1830’ or ‘for the use of the pensioners' table 1830’. The image below shows a sample of some of this cutlery which is still in use today. 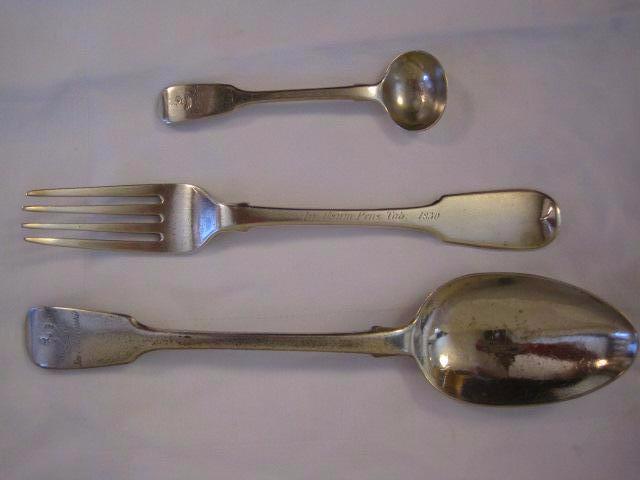 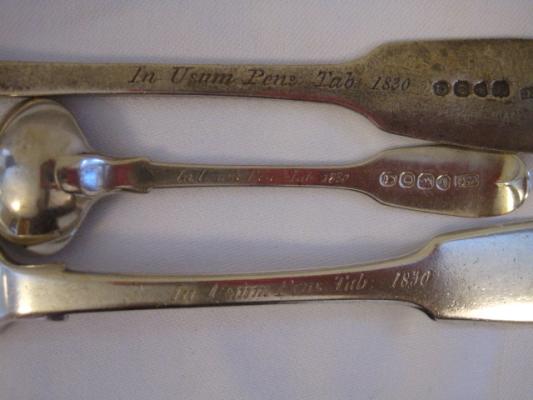 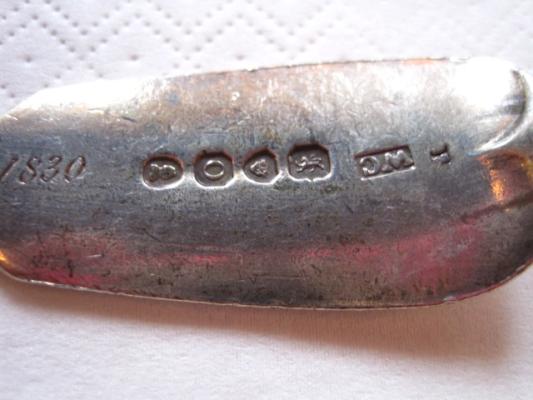 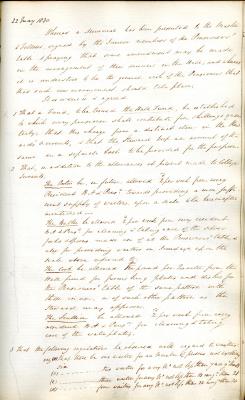 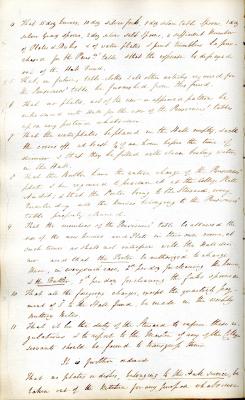 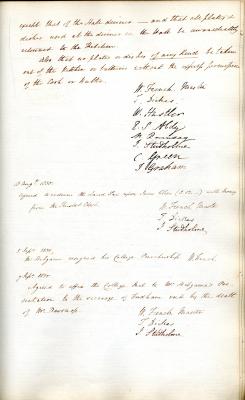