May Balls are a major feature of Cambridge life, offering a chance to celebrate following the end of exams and the hard work put in over the course of the year.

May Balls became popular in the late 19th century and were originally held in May before exams took place although it was soon decided that it would make the events more enjoyable if they took place once exams had finished. However, the phrases ‘May Ball’ and ‘May week’ have stuck.

Although the College now hosts an annual May Ball, this has not always been the case. The earliest description of a May Ball in the Archives comes from the former College magazine Chanticlere of 1896, although the same article refers to a previous May Ball held ‘more than ten years ago’.

There is a small selection of programmes for College May Balls surviving in the Archives, but relatively little by way of organisational paperwork providing details of individual events. However, we do have both a programme and paperwork relating to the May Ball of 1968.

The 1968 Ball, held on 11th June, was the first in College since 1965. It was larger than previous balls with allowances made for around 1,100 guests rather than the previous numbers which had been capped at about 700.

Similarly, as with May Balls now, food, entertainment and dancing was provided. The plan below shows how various parts of College were adapted to accommodate the Ball. This includes cloakrooms, a champagne bar in First Court (which became a soup and roll bar in the early hours of the following morning), a marquee in Pump Court where a buffet was available and the entrance to the discotheque which was held in Upper Hall. 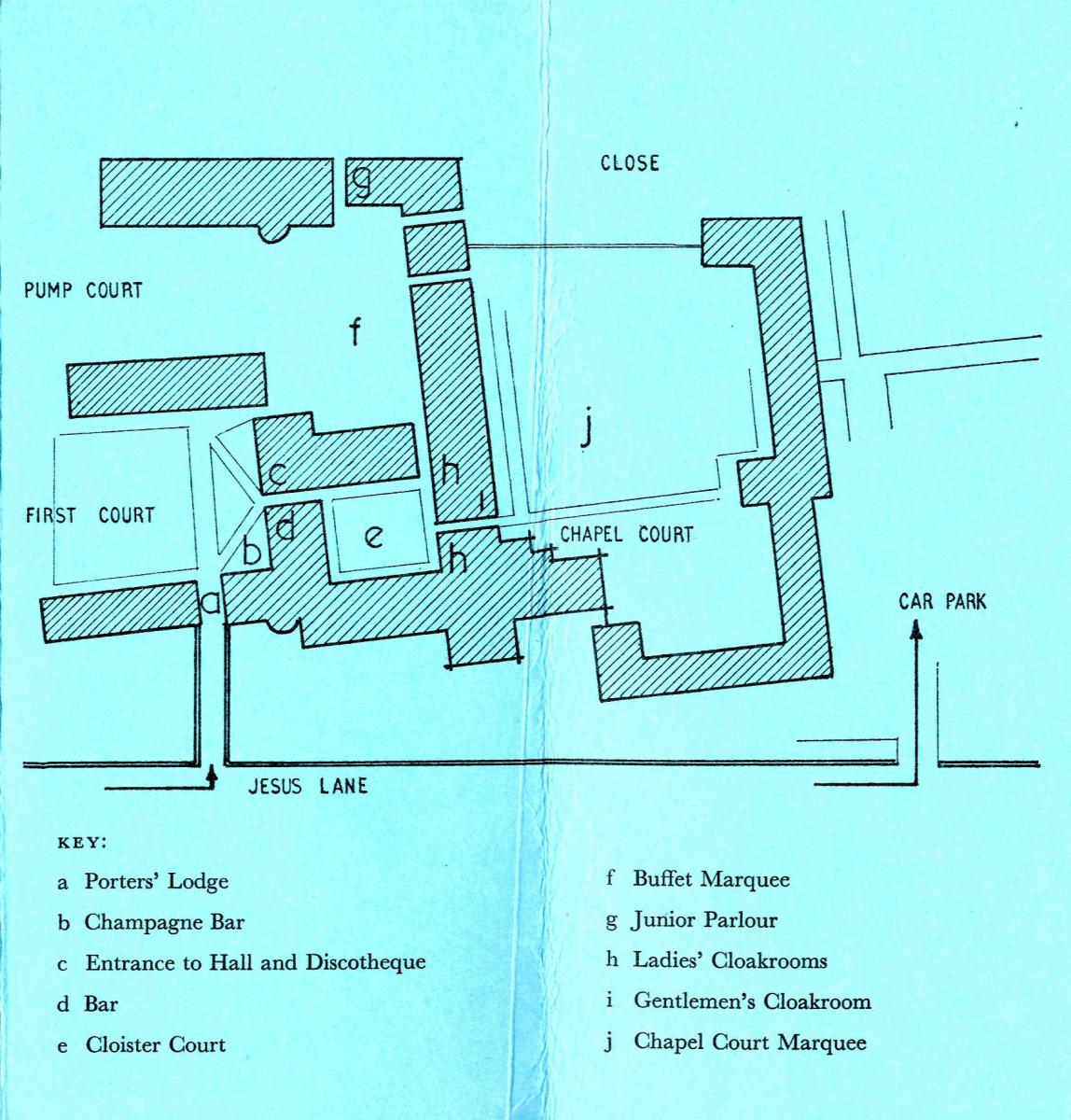 The College’s Annual Report also describes how a candle lit dinner was given for certain guests in the Hall. As can be seen from this list created for the benefit of catering staff working the tables that evening, dinner in Hall and the food in the marquee in Pump Court was simple but appetising. 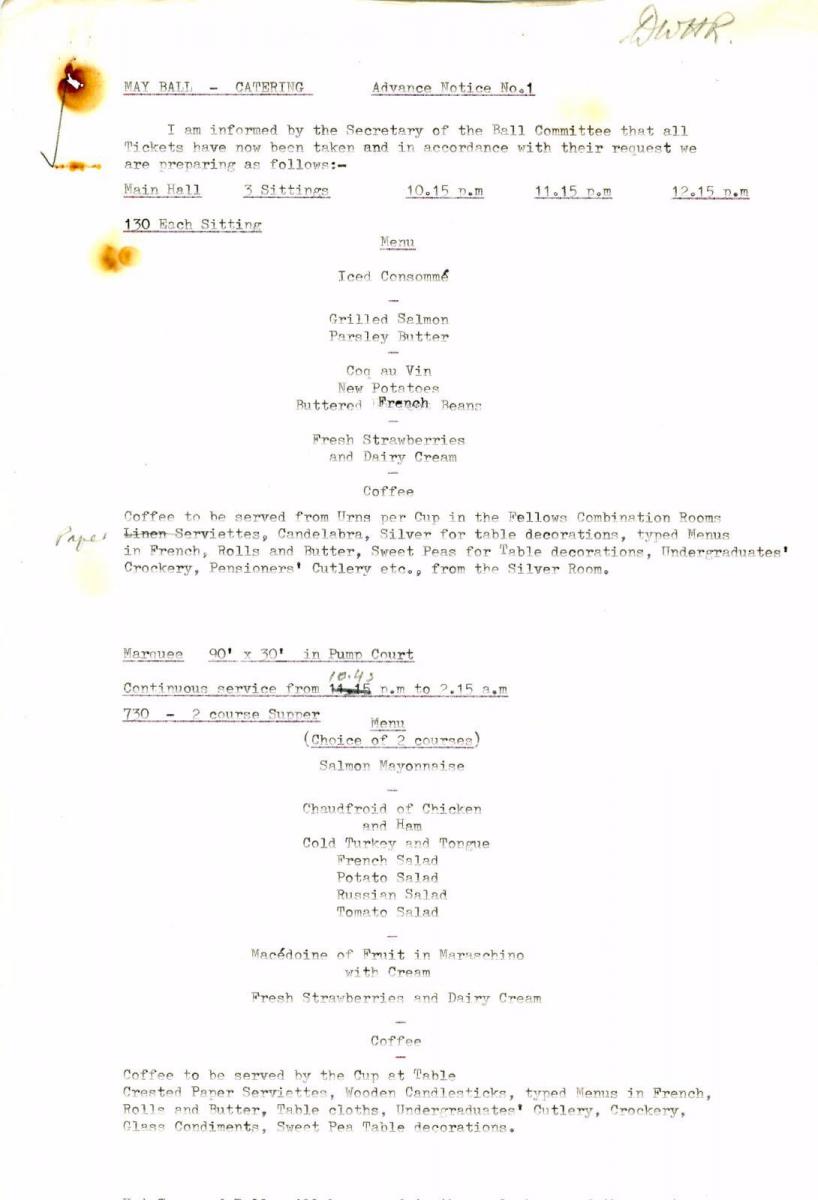 A design for the layout of the buffet in the marquee in Pump Court also gives us an idea of how the spread would have been arranged on the buffet table. 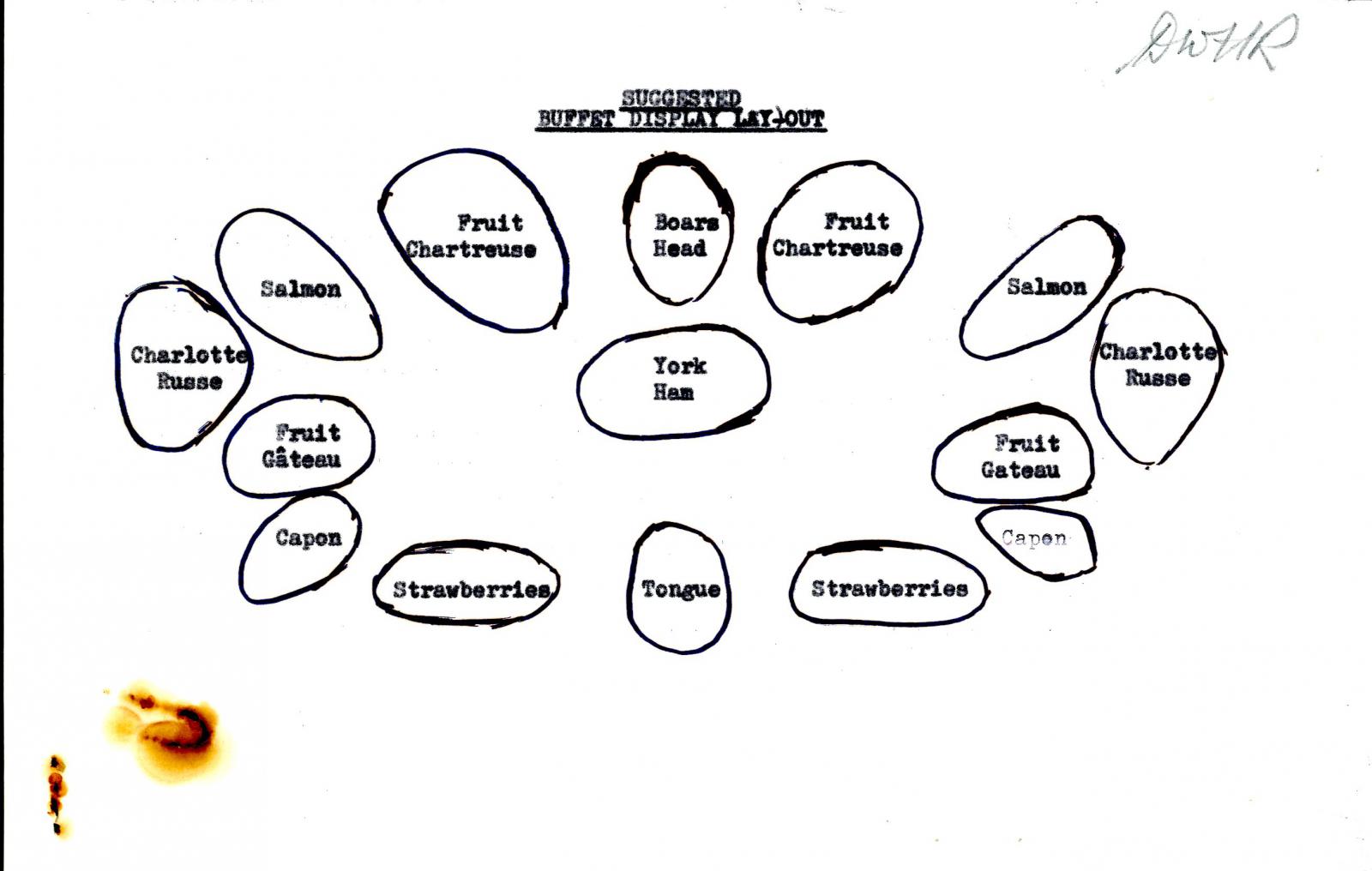 The catering for the Ball was managed by the College’s then catering manager, D. W. H. Robinson. Food was sourced from both local and national suppliers including Wetherell’s butchers on Mill Road, Sennitt’s poulterers and fishmongers at 3 Peas Hill (which had been trading since the late 19th century but was bought in 1972 by another local fishmonger. The building is now occupied by a branch of Aromi), the Richmond Sausage Company, and the Ross Group, a national fishmongers business (which was sold in 1988).

Bread rolls were bought from the Dorothy Café on Sidney Street (which closed in 1972. The building is now occupied by Waterstones), E Pordage and Co., fruit merchants at 128 Hills Road, and disposable cups from ITW Ltd, including cup holders ‘attractively styled in tan polypropylene’. 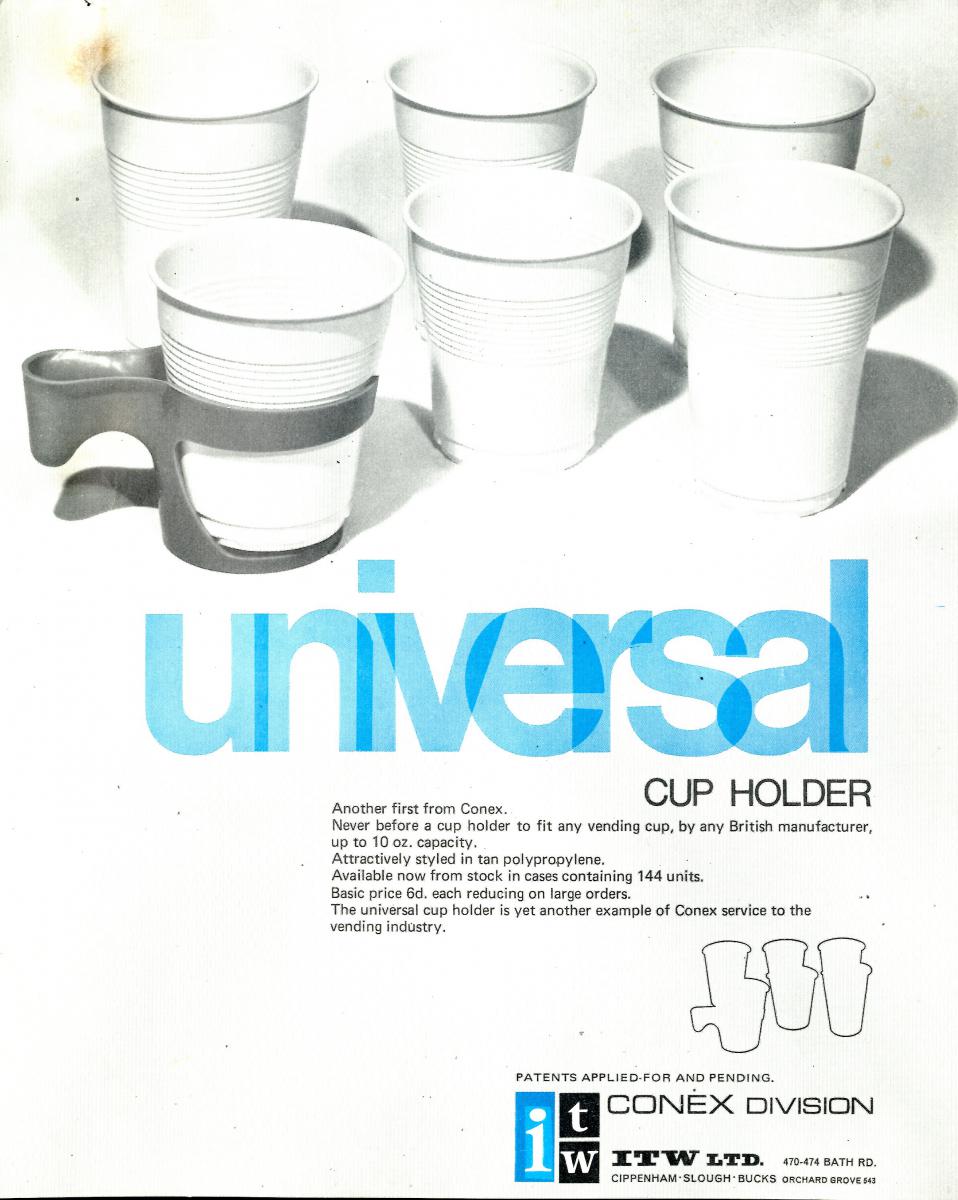 Entertainment was varied and included performances from the Bonzo Dog Doo-Dah Band, the Spencer Davis Group, The Mike Bunting band, the Shell Tornados Steel Band, The Tweedle Duo, Ellison’s Hogline, Simon Dupree and the Big Sound, the Rubber Band and Alexis Korner. Please click on the band names with hyperlinks for a sample of one of their songs that may well have been performed at the Ball.

The Annual Report also describes how Spencer Davis was, in 1968, an emerging Welsh entertainer and that a cameraman from BBC Wales attended the Ball in order to record Davis as part of a programme focussing on the development of his musical career. Rooms were made available for the entertainers to relax in when they were not performing where they were provided with cold buffet style suppers. The note below shows which rooms the entertainers were allocated. Waiters on duty also received suppers and were allocated room M1. 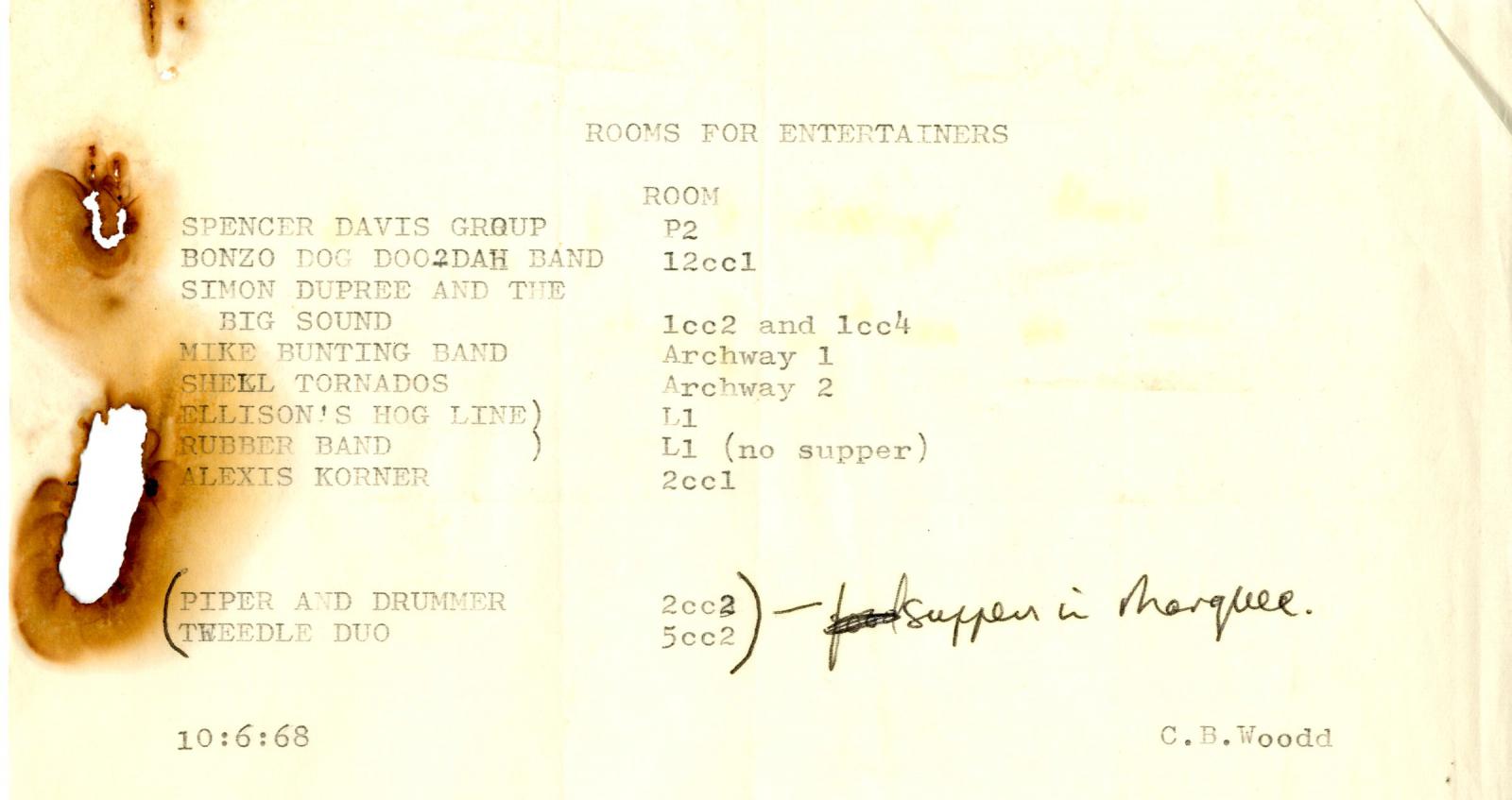 The 1968 Annual Report’s review of the May Ball describes First Court as resembling a Parisian café but also mentions that an ‘errant photographer’ from the Cambridge News took a photograph of the aftermath of the Ball to include in the 12th June edition of the newspaper. The copy of that photograph below clearly shows two of the partygoers had a good time. 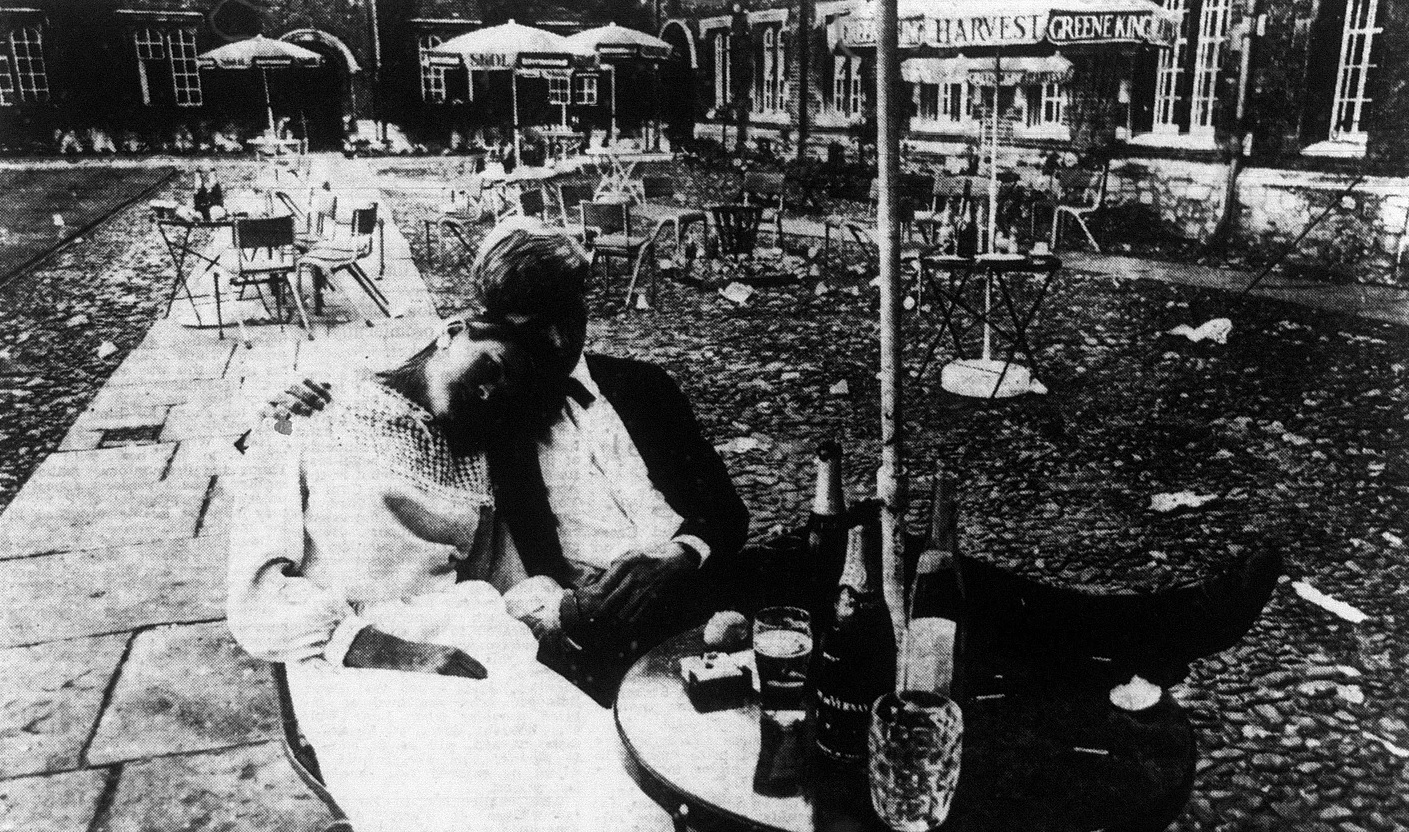