In the first decades of the sixteenth century all the Chapel’s windows were filled with stained glass: Sir John Rysley, one of Henry VII’s closest aides, left money for this in 1512. On 23 December 1643 every one of them was, on the orders of a parliamentary committee, smashed by men led by William Dowsing whose diary proudly recorded this godly vandalism. For the next two hundred years there was, save for a few coats of arms, nothing but clear glass.

Making good Puritan iconoclasm was an integral part of the nineteenth-century Chapel restoration programme. Based on good archeological evidence and utilising surviving fragments, the reconstruction between 1846-1849 was guided by Robert Willis, the foremost historian of Cambridge architecture, working initially with Anthony Salvin and then with AWN Pugin, the first of the great gothic revival architects.

Pugin began in the lancets above the altar with scenes from Christ’s passion in the style of Chartres and Canterbury cathedrals, sending the maker, Hardman of Birmingham, fragments of French medieval glass with instructions to match their colours. The other windows were also filled with Hardman’s glass. The windows in the north wall’s lancets have scenes from the New Testament and St Radegund’s life, and those on the south scenes from the life of St John. But the glass in the two Perpendicular ones on the south weathered badly, being replaced in 1912 by Sir Edward Burne-Jones’ designs. Though their colour is brilliant, they broke Pugin’s (and Morris’s) rule, otherwise obeyed throughout the Chapel, that the subject of each light should be complete in itself.

The windows in the Outer Chapel were glazed between 1867 and 1878 with glass designed by William Morris, Burne-Jones, and Ford Madox Brown. In the North Transept the figures represent the Theological and the Social Virtues, with the adjoining nave window symbolising the Natural Virtues and their corresponding Vices. The other three nave windows have figures and scenes from the Old Testament. In the four smaller South Transept windows are the four Evangelists and scenes from their Gospels, while the Great South window (pictured below) represents the Church in Heaven and on Earth: in the upper half the orders of angels, in the lower St Radegund and other women saints, as well as Bishop Alcock and four Doctors of the Church. This is one of the finest collections of Burne-Jones’ windows in the country. Soon after completing the work, however, Morris announced that he would no longer make stained glass for medieval churches, believing that doing so countenanced the sort of church restoration of which he now disapproved: “your chapel” he wrote, “is glazed, but just in time”. The designs for it were, however, to be frequently re-used in new Anglican churches worldwide. 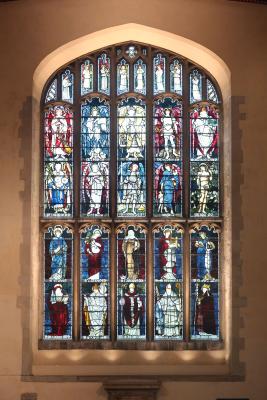 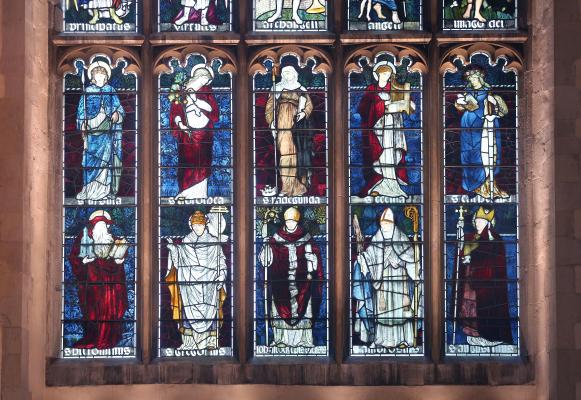 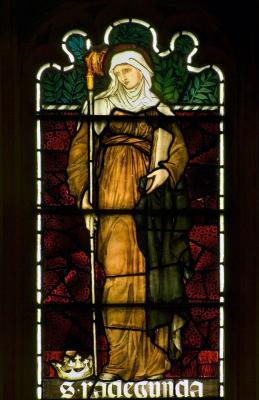