Thomas Crowe came up to Jesus in 1905 from Malvern College. 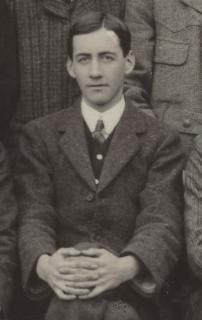 "One of the greatest strokes that Jesus has had"

“No one who saw him in his first year could have guessed that he would become one of the greatest strokes that Jesus has had. He was then tall, slim and looked rather weedy” (Jesus College Society Annual Report ,1915).

Given this description it was fairly easy to recognise him from the 1905 matriculation photo, the detail of which appears in this article.

He obviously developed his rowing, as by 1908 he was stroking the First Boat and his name quickly became synonymous with reliability and coolness in a tight situation.

“Any crew which backed up the stroking of Jim Crowe could not fail to be good… “ (Chanticlere, Lent 1909).

“In 1909 he stroked the Head of Lents and in the May races stroked the boat that reached Head of the River by bumping Trinity Hall and keeping it there by his coolness in dealing with the rushing tactics of First Trinity on the last two nights” (Jesus College Society Annual Report ,1915).

In 1911 “There was some surprise and not a little jeering in rowing circles when it was announced that a Jesus crew had determined to go to the continent and row the renowned Belgian oarsmen in their home waters at Ghent” (Jesus College Society Annual Report ,1911).

Thomas, known to his contemporaries as “Jim” was the natural choice to stroke the Jesus boat in what turned out to be a famous victory. Having started slightly behind, the crew relentlessly caught the Belgians and drew ahead. Then, under the great bridge that marked the mile on the course the Jesuans made the break:

“…we raised our stroke slightly and give such a “ten” that we leaped ahead, and I thought our opponents would never emerge from their arch, until at length they darted forth, three lengths behind” Conrad Skinner (cox) writing in Chanticlere in May 1911.

"That prince of the river"

A verse written in honour of the victory confirms the impression of a likeable young man who was admired and appreciated by his contemporaries:

“That prince of the river

Graceful of form and

The joy of his fellows,

Beloved of the ladies.”

Perhaps he was a good example of coach Steve Fairbairn’s maxim that being a good oarsman has to come from inside you?