Roy Evans Bullen came up to Jesus College in 1911 from the Leys School. 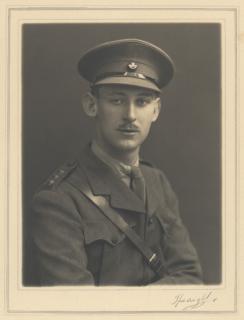 According to the Jesus College Cambridge Society Annual Report 1916, he was head prefect and captain during his time at the Leys.

Whilst at College he pursued his sporting activities with great vigour, as a member of the rugby, lacrosse and cricket teams. He would eventually become the Captain of the Jesus College Rugby Union Football Club and attain a blue for lacrosse in 1913 and 14 (Biographical Notes of Members 1901-1920).

He made an immediate impact at rugby and was described in his first term as “A very tall forward, useful out of touch. In the loose is good with his hands but is inclined to kick too hard. Must improve his scrum work if he is ever to do any real good” (Chanticlere, Michaelmas Term, 1911, p24).

He seems to have made a similar impact at lacrosse in Lent Term 1912, when he made the ‘Varsity XII as the goalkeeper. Chanticlere wrote that he “swears by the overlapping grip, and keeps his eye well on the ball”. (page 36)

Still in his first year and now in the third term he became a member of the cricket team, where he was described as having done good work with the ball (Chanticlere, Easter Term 1912, p41).

His averages are produced in the Michaelmas Term 1912 edition, (on the opposite page to yet another glowing rugby tribute). He batted well, scoring 216 runs from 13 innings but his bowling figures are impressive getting 31 wickets from 174 overs at an economy rate of 18.09 (Chanticlere, Michaelmas Term 1912, pp30 - 31).

This pattern of excelling at each sport continues throughout his time in College, and he is given the honour of a “Cock of the Roost” type article in the Michaelmas Term 1913 Chanticlere.

He got his BA in 1914 and then joined up almost immediately. He had already survived being wounded twice in 1915 but succumbed to the wounds he received in battle in April 1916.

The photograph above was accompanied by a letter from his parents in which they quote Kipling’s poem “Dedication” from “Barrack-Room Ballads” in honour of their son:

E'en as he trod that day to God so walked he from his birth,

In simpleness and gentleness and honour and clean mirth.”