Roger Bingham Turner came up to Jesus College in 1914 from Charterhouse School. 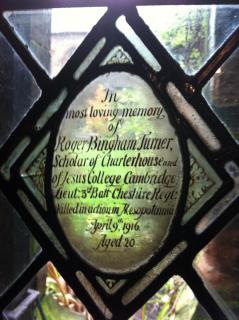 He was the oldest son of Bingham Dixon Turner, a Fellow of the College in 1881.

Turner resided in College until March 1915 and along with other students spent his time training with the University OTC.

He obtained his commission in the Cheshire regiment in April 1915. The Jesus College Society Annual Report 1916 obituary for him records that he assisted in the evacuation of troops at Suvla and Helles.

He was killed in a later attack on an entrenched enemy position. “He was a youth of great gifts and excellent promise” (Jesus College Society Annual Report 1916, p30).