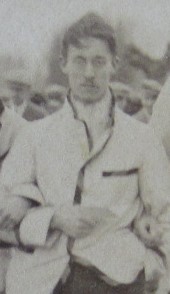 Aside from being a hard working Classical Scholar he was a member of the Jesus College Boat Club, stroking the second boat in the May Races 1914. He also stroked the Jesus boat in the Thames Cup at Henley that year and were narrowly beaten by Caius in the final.

It also seems that Murray was a good singer as he sang at a concert held on 5 June 1913, which was funded by the Master and was the first occasion in seven years that such an event had taken place.  The report in Chanticlere records that “The audience were a little mystified by the first item, Mr Murray’s singing being somewhat obscured by the eccentricities of the accompaniment”.

Chanticlere also published the programme which shows that in Part I, Murray sang: Schottische Lieder by Beethoven – a) “The Soldier” and b) “The pulse of an Irishman” accompanied by Miss Seaton on the violin and B. P. Luscombe on the Cello Obbligato.

Interval refreshments were served in the Cloisters “which were tastefully illuminated, and made a delightful setting to the festive scene”. In the second half Murray sang in a vocal quartet with W.C.B. Southward, H. V. Parker and H. Burnaby, singing “Every Rustling Tree” by Kuhlan and “Thuringian Volksleid” by Franz Abt (Chanticlere, Easter Term 1913, pp35-6).

The College obituary for Murray says that he received a commission at the start of the war and was wounded in August 1915 at Gallipoli. It also says that “on the day of his death he was twice hit, each time rising to lead his men on, after which he was killed by machine gun fire”. The obituary ends saying “He is the third classical scholar of his year who has fallen” (The Jesus College Cambridge Society Annual Report 1917, p31).