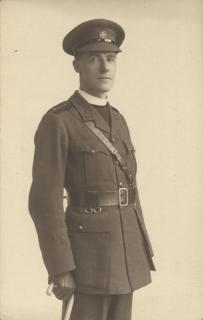 After he left King Edward’s High School in Birmingham he qualified as a solicitor, and had practiced for one year before coming to College.

He graduated in 1913 with a BA in 1913 and was then ordained, serving as a curate at St Philips in Birmingham and Chaplain to Birmingham General Hospital.

Possibly as he was a mature student with a vocation to the priesthood there is no record of him in the student magazine, Chanticlere. The Jesus College Society Annual Report 1916 obituary for him claims that he volunteered to be an army chaplain at the outbreak of war.

He was attached in the first instance to the West Riding Regiment and then to “a Scottish Regiment” (Jesus College Society Annual Report 1916, p22). The Scottish regiment in question was the Gordon Highlanders. This little snippet of information and the details about his ordination, mentioned above, come from the scrapbook of newspaper clippings made by the College’s Head Porter at the time, Mr James Hoppett.

The Annual Report obituary extensively quoted a letter sent from an officer, before de Vine was killed, detailing the work de Vine did whilst at the front.

The officer wrote that “He has been within whispering distance of the Boche too, gathering identification discs and papers from the dead between the lines”, presumably so he could write similar letters home.

The same officer wrote “He was a brother amongst us … There is no man I would sooner have beside me when hell is loose than de Vine” (Jesus College Society Annual Report 1916, p22).

Reverend de Vine was killed by a shell in France on 27 April 1916. There is more information about him on the Tipton Remembers website.