Reginald Ambler Sarsby came up to Jesus College in 1912 from Paston School in Norfolk. 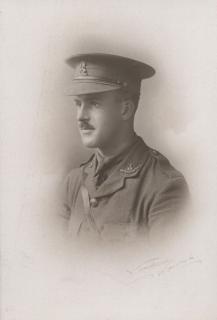 Whilst at Cambridge he read for the Historical Tripos, achieving a 2:2 in History I in 1914. Like many others he was awarded a BA in 1915 in virtue of his military service.

Other than studying history, Sarsby was a member of the 1913-14 Jesus College Association Football team where he played at either inside right or inside left.

In the Lent term edition of the Chanticlere he was described as “A sound forward. Fast and a good shot. Combines well with his outside but rather neglects his centre” (p42).

Sarsby was playing in a team that had lost some of its star players the previous year and the reporter was concerned at the lack of first years in the team, there being six third years, four second years and one first year (Chanticlere, Michaelmas Term, 1913, p35).

The approaching war did not appear to register on the reporter’s horizon as he noted that the team would be “weak next year, unless we get good material in the new recruits” (Chanticlere, Lent Term 1914, p41).

Sarsby was commissioned to the 10th Norfolk Regiment in December 1914, later attached to the 7th Battalion, one of Lord Kitchener’s New Armies. He went to Flanders shortly after the award of his BA and fell in action on 22nd December 1915 (Not 31 December 1915 as the University War List suggests).