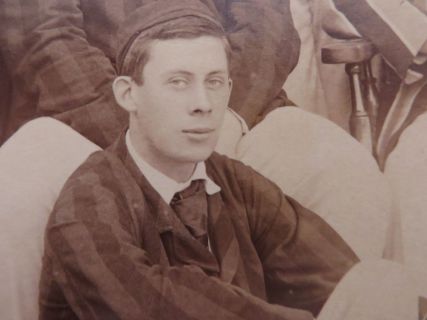 He came up from Epsom School in Surrey where he had a good reputation as a cricketer and it was hoped that he and fellow fresher, F.L. Hinde, would “one day help to defeat Oxford”. (Chanticlere Easter Term 1893, page 95)

His averages show that he was a bit of an all-rounder who had varying batting and bowling averages. It appears that in his first season he did well with the bat, including hitting 75 runs against Selwyn and achieving a score of 60 not out against Trinity Hall; however, his bowling was described as “disappointing”. (Chanticlere, Michaelmas Term 1893, pp. 23-27)

The following season saw him continue as a member of the First XI in cricket; his bowling average was a little better but his batting declined considerably, scoring 130 runs throughout the season. (Chanticlere, Michaelmas Term, 1894, page 142)

Perhaps his head was turned by a new sporting activity for him – hockey. Hockey was yet to appear as a Jesus College sport but Chanticlere was pleased to “congratulate Levick on his excellent chance of obtaining distinction in the somewhat humbler sphere of hockey.” (Lent Term 1895, p. 156.)  It is further recorded in the Easter Term edition that Levick went on to attain his half-blue for hockey which they commented was “phenomenal” as he had only taken up the sport that year. (Page 196)

We have a local newspaper obituary, sent to us from Epsom School, which details his career after he left College. He initially spent some time at Kings College London Hospital before moving to a practice in Guildford, where he was “exceedingly popular with his patients”. He spent the early part of the war with the Red Cross before “he was called to colours in September 1916”. It is notable that whilst he was away from his practice a woman, Dr Helen Moss, managed it.

Dr Levick went to France in 1917, after spending some time in Brighton. He was killed instantly in a tragic accident when his horse slipped and threw him under a passing motor lorry.