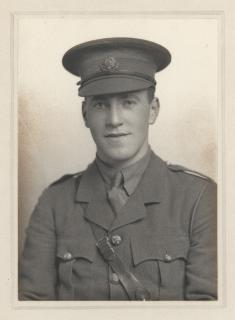 He read for the Theological Tripos for “which he was expected to take a high place” (Jesus College Society Annual Report, 1915, p30). It is likely that had the war not intervened he would have taken Holy Orders.

An offprint, from the July 1915 edition of the Journal of the East Yorkshire Regiment (“Snapper”), sent to the Master during the war, records that on Oliver’s 21st birthday he expressed a “desire to dedicate my whole self – personality and life – to Jesus Christ and to live only for him” (Snapper, July 1915 “Reminiscences of Oliver Luther Hawkins”).

The College obituary mentions that Hawkins occupied the rooms previously taken by HJS Shields (1906) the army medic who was killed treating a comrade whilst under fire and that in many ways they shared varoius points of resemblance, “especially in his great influence for the good of the College” (Jesus College Society Annual Report, 1915, p31).

Oliver Hawkins was indeed an active member of the College taking on society and club responsibilities such as secretary to the Athletics Club and Vice-President of the Roosters (College Debating Society), as well as being another recruit to I Company, the Jesus College section of the Cambridge University Officer Training Corps.

A small clue about Hawkins’ nature comes in the Lent Term 1914 edition of Chanticlere where he and fellow Rooster, Harold Bryant Salmon (m. 1910), are given a Lenten Penance “to laugh inaudibly” (p20).

It was likely that he would have become Captain of the Athletics Club in his final year, 1914-15 (Jesus College Society Annual Report, 1915, p31). As an athlete he was proficient at the long jump and the sprints. In his first year he took part in the annual athletics meet against Trinity College, Oxford; Jesus winning on this occasion by eight events to two.

Hawkins won the long jump with a distance of 20 feet and a half an inch (6.11 metres) (Chanticlere, Lent Term 1913, p36). The winning jump at the 1912 Olympics was 7.60 metres and Hawkins' jump would have equalled Emil Kukko of Finland who came in 24th place. The current world record for the long jump is 8.95m.

The Snapper article gives a detailed account of the battle in which Hawkins was fatally wounded and most of his battalion wiped out.

The article starts by saying “This, it will be remembered, was the day after that on which the Germans first made use of poisonous gas in the attacks on our positions near Ypres”.

It does not appear that gas was used in the attack on 23rd April but the English and Canadian battalions met with heavy shellfire; “we only seemed to fire one shell to at least ten of the enemy’s”.

Hawkins was hurt in the afternoon of the 23 April and was transferred to hospital in Hazebrouck where he died from his wounds on 26 April. In his last letter home, written 24 April he wrote “Thank God with me for all His mercies” (Snapper, July 1915 “Reminiscences of Oliver Luther Hawkins”).

The College obituary ends by saying “In him the Church has lost a grand recruit”.