Noel Crawford Hamilton came up from St Olaves School, London as a Rustat Scholar (Classics, £60) in 1912. 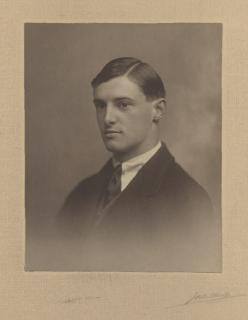 A year later after his first year examinations he was elected a Bell Scholar (Jesus College Society Annual Report, 1913, p26). In the obituary for Hamilton it says that he “kept wicket extremely well”, however there is no mention of him playing cricket for the College. In fact both Chanticlere and the Annual Reports for the years he was here were quite scathing of the college cricket team.

"Jumped in a truly classical style"

There is mention of him in the Athletics team in 1913-14, where he was successful in the long jump against Trinity College, Oxford. He won by a distance of 20 feet and “jumped in a truly classical style” (Chanticlere, Lent Term 1914, p44).

Hamilton is also referenced on the very last page of Chanticlere before the war under a piece entitled “Answers to Correspondents”: N.C.H. “Folly in fools bears not so strong a note, As foolery in the wise.” (Easter Term 1914, p39).

This is a quotation from Shakespeare’s “Loves Labours Lost”, in which the King and his three noble companions take an oath not to give in to the company of women. What the relevance to Hamilton’s situation was thought to be can only be guessed at!

A casualty of the Somme

He was slightly wounded on 1st July “he was shot through the head when again in action on July 14th 1916” (Jesus College Society Annual Report, 1917, p26). The obituary goes on say that his Colonel, brother officers and a private sent letters to his parents, one wrote “ He was blessed with a most lovable nature…. an upright, clean English gentleman”.