Maurice White came up to Jesus College in 1890 from Bedford Grammar School.

Died of heart failure whilst on active service in East Africa: 2 May 1916 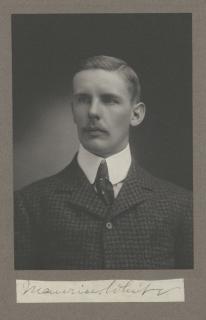 White was an active member of College during the three years before he got his BA by the Classical Tripos in 1893. In particular he was an enthisiastic participant in the “Common Room” and “The Cranmer” College debating societies.

He appears to have got stuck in from the start and is lauded by Chanticlere for being one of three or four freshmen who joined in October 1890. White’s first motion, on October 29 was the somewhat philosophical proprosition “That white is black”.

He proposed a more serious motion on 28 January 1891: “That a high standard of private morality is essential in a good statesman”.

As Chanticleer records, Charles Parnell and Sir Charles Dilke, both of whom had been involved in divorces in the 1880s, were brought into the debate to “point a moral and adorn a tale”. The motion won by 10 votes to 5 (Chanticlere Easter Term 1891, p35).

Secretary of the Common Room

White continued to be involved in the Common Room throughout his time in College, acting as Secretary in 1891-92 which included the 100th meeting of the society.

At this meeting, the reporter thought, the debate was “worthy of the occasion”. The debate centred on the merits, or otherwise, of vaccination.

It appears that a visitor who had lost his eyesight due to a vaccination and had thought he would vote against the use of them was swung to vote the other way by a powerful speech from Mr J G Adami, a Fellow of the College and future Vice Chancellor of Liverpool University (Chanticleer, Lent Term 1892, p72).

After graduating in 1893, White became a master at King William’s College, Isle of Man before going out to explore the Klondyke.

The Boer War and South Africa

Soon after the outbreak of the Boer War he went to South Africa and fought with the Sherwood Rangers. He then went on to be the “Inspector of Schools in the Transvaal district by the Board of Education” (Jesus College Society Annual Report, 1916, pp30-31).

He joined the 2nd South African Horse in December 1915 to fight against German East Africa. Information on the back of the above photograph indicates that he died of heart failure and was buried at Kondoa Irangi cemetery. His body was later moved to Dar es Salaam cemetery.