​John Brodhead van Schaick joined Jesus College in in October 1884 from Phillip’s Exeter Academy in New Hampshire and went on to attain his BA in 1888. 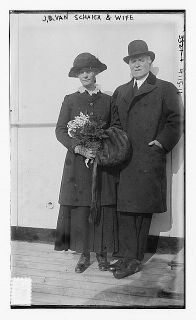 van Schaick came up to Jesus College one year after Henry Brydges Yates (1883) but they were both born in 1865 and are the oldest Jesuans to have died in the First World War. It is ironic that van Schaick was born in the year that the American Civil War, another catastrophic conflict, ended.

Like Yates, van Schaick was an active member of the College, particularly in the Jesus College Boat Club. He rowed regularly in the first or second boat in the Lent and May races and at Henley, he also rowed in the coxed fours, the Farquharson Pairs, the (Fairbairn) handicap Sculls and the (Larking) Sculls.  In fact, on one occasion he was coxed in the fours by H.B Yates, who was usually to be found playing in goal for the Association Football Team.

The student magazine, The Chanticleer was launched in Michaelmas Term 1885, (van Schaick’s second year). The first few editions are particularly detailed and we are fortunate to have quite a bit of information about him. In the Lent Term 1886 under the report on the Rugby Team’s activities there is a surprising mention of van Schaik in a match between Pembroke Boats and Jesus Boats.  A match which was “decidedly amusing, if not scientific” and was won by Jesus Boats. Van Schaick, along with F. Fairbairn and J. Osborne “worked hard in the scrimmages”.  (The Chanticleer, Lent Term 1886, p. 24)

In Easter Term 1887 it appears that van Schaick took a dip into the murky waters of the River Cam when he made a “gallant attempt to rescue life”, The Chanticleer was “sorry he was defrauded of his prize at the last moment”.  So it must be assumed that the life was not that of a person but, most likely, an animal.  The reporter, however, laments the state of the River Cam and wonders when “the Town is going to wake up and do something to cleanse the river? Not until the Greek Kalends come, we fancy.” (Michaelmas Term, 1887, p. 7)

Van Schaick left in 1888 and returned to New York where he went into the brokerage firm owned by his family, Van Schaick & Co., eventually taking over the reins after his father, Jenkins, died in 1899. It is notable that he remained in contact with College, being recorded  in the list of members of the Jesus College Cambridge Society in the first Annual Report in 1904. (p. 88)  He also contributed to the Henley Fund in 1905, organised by one of van Schaick’s peers, Steve Fairbairn, to take a crew to Henley. (Annual Report 1905, page 31).

We have heard from his family that van Schaick was a member of Herbert Hoover’s Commission for Belgian Relief from 1915 and was awarded a medal from the City of Antwerp in recognition of his services. He and his wife, Lotta Carll Johnston van Schaick also spent time in France, having brought over an ambulance that they had purchased to help with the war effort. She had nursing duties in France before she returned to the States.  Their only son, also John Brodhead van Schaick was sadly killed in action during the Second World War.

We are very grateful to Mary Sibley, a relative of John van Schaick who has supplied us with some additional information about him and some images from his time in Belgium.