​Herbert Charles Lunn, matriculated in October 1908 after attending Trent College in Derbyshire and left in 1914 with a BA. 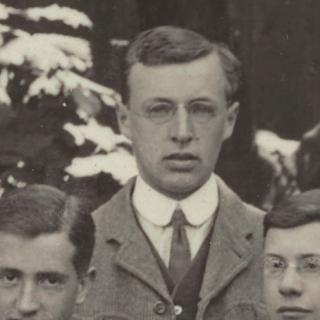 Unfortunately, we do not have much information about him. The Jesus College Cambridge Society did not provide an obituary for him in their Annual Report. His father, Rev Herbert Lunn (1875) died in January 1908 and was the subject of a fulsome tribute, perhaps because his son was on hand to supply details of the local newspaper obituary. Sadly, nobody appears to have done the same for him.

Lunn appears to have been at the College for two periods, the Book of Examinations for all students from October 1872 to November 1951 shows that he went down in June 1910 but reappeared in December 1912 and getting a first in History Special I.  He later took History Special II and Theology Special I and II and gains his BA in June 1914. It seems that the early death of his father might have disrupted his studies.

Lunn appears in the matriculation photograph for 1908 but is not mentioned in Chanticlere.