Henry William Hugh Meeres came up to Jesus College as a Rustat Scholar, in Michaelmas Term 1899. 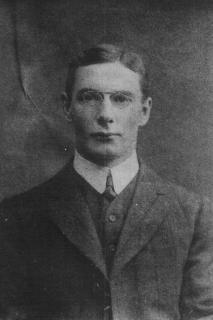 There is relatively little information on Meeres in the College Archives and frustratingly the matriculation picture for 1899 is missing from the Jesus College Freshman 1896-1929 album. He came up from from St John’s School, Leatherhead and graduated with a BA degree in the Classical Tripos in 1902. He came up from St John’s (who have kindly allowed us to use their image) with colours for cricket and as the Captain of the association football team. He continued to play football whilst at College. The 1901 Easter Term edition of Chanticlere states that he played at half back and “works hard” (Chanticlere, Easter Term, 1901, p386).

The Jesus College Society Annual Report obituary writes that when Meeres left College in 1902 he became a schoolmaster, serving as assistant master at Birkenhead School from 1904 - 1908 before entering a London business firm in 1908. He was one of the older Jesuans to serve in the war and was a married man and a father of two very young children.

At the outbreak of war he joined the Territorials and was shipped out to Malta and subsequently to France where he was Lance Corporal, and had been recommended for a commission. He was killed in action on 19 March 1915.

“Though of a somewhat retiring disposition he had plenty of friends and was much respected” (Jesus College Society Annual Report, 1915, p23).