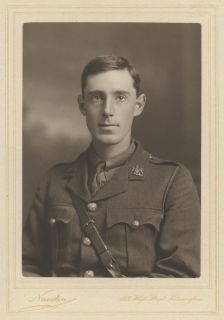 He had entered in 1914 but enrolled at the Royal Military Academy at the outbreak of the war.  However, after a bout of ill health he came up to College in January 1916.

There is, of course, very little information on Savory other than his obituary in the 1919 Jesus College Cambridge Society Annual Report.  It records that whilst he was here he studied languages and engineering and the exam records book attests to this.  He took Special Paper I in Languages in June 1916 and Dual Mechanical Sciences in October 1916. The obituary also states that he was “an accomplished musician” and, when his health allowed he was “a good lawn tennis player”.

His health improved sufficiently during his time a College and he was able to join the Cambridge University Officer Training Corps, eventually going on, in late summer 1917 to join the Garrison Officer Cadet Battalion.  He was then attached first to the Durham Light Infantry and subsequently to the Suffolk Regiment.  He was sent to the front in 1918.  “His friends here were horrified as he seemed totally unfit to stand an active campaign.” (Annual Report 1919, p. 29)

We believe that the photograph of Savory was provided by his family.  There is a note on it which states “Henry Lawrence Scott Savory aged 21. 2nd Lieut: 3rd Batt. Worcestershire Regt. Died of wounds received in action on the same day on Mount Kemmel.”

His mother also sent a note, along with a subscription for the College War Memorial, written on the two year anniversary of his departure for France.  In the letter she wrote that he went to France “to do his duty and loyal service for his King and Country and to fulfil his own high ideal of what a man should be.”