George Herbert Payne came up to Jesus College in 1911 from Wellingborough Grammar School. 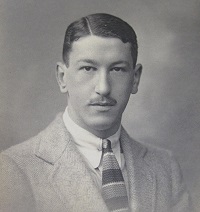 Payne fell in action at Le Cateau in the retreat from Mons on 26 August 1914. A Sergeant-Major wrote that he “died nobly defending the position in which he had been placed” (Jesus College Cambridge Society, Annual Report, pp27-8).