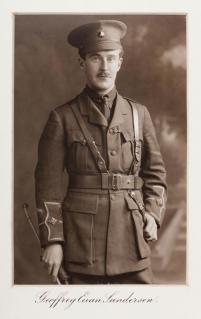 The Jesus College Society Annual Report, 1917 obituary for Sanderson provides little information on him as a student other than to say that he got his BA in 1910. The College’s Examinations Book shows that he took papers in Theology.

The obituary sheds some light on his career after graduating, claiming that he was “Much interested in movements for the welfare of boys, he was the first scoutmaster in Northumberland” (p36).

He joined up as a private in the Royal Fusilliers Public Schools battalion at the outbreak of war. He was later commissioned and at the time of his death was serving with the Royal Irish Rifles, attached to a machine gun company as Lieutenant.

His captain reported that “on the day of his death he, his party and his gun were wiped out while gallantly holding an important point” (Jesus College Society Annual Report, p36).

Marlborough College archives have the following account of his last actions. “His Brigade attacked at 7.30 in the morning. About 3.30 in the afternoon the right flank was being bombed by the Germans and his men had run short of bombs. He seized a rifle from a man, and called out to the men to charge. He rushed forward, turned round and waved to the men, and immediately afterwards fell dead.” We are grateful to Marlborough College archives for permission to use the image of him in uniform.