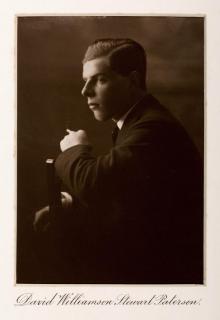 It appears that Paterson did not stay at University for very long, possibly for less than a year. He does not therefore appear in many records. Information supplied by Marlborough College archives, along with the image that we have used indicates that he spent time in India during this period.

He is not included in the matriculation photograph (taken in 1909). He does not appear in The War List of the University of Cambridge 1914-18 nor is there an obituary for him in the Jesus College Society Annual Report.

However in 1977, Paterson’s cousin A S Trapnell (1932) informed Mrs Muriel Brittain, the Keeper of the Records that he had joined the Royal Flying Corps and that: “Three weeks to the day after going to France in May or June 1916 his plane was shot down. He was posted missing presumed killed". In the early 1920s his brother found his grave in France”