Bernard Pitts Ayre matriculated in 1911 having spent the previous five years at the Leys School. 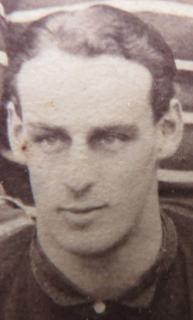 He graduated in 1914 with a 3rd in Natural Sciences Part I. Like many other old Leysians he was an excellent lacrosse player and attained a lacrosse Blue within his first year, one of four Jesuans in the University XII that year.

However, in his second year his ‘Varsity Lacrosse days were seemingly at an end and he took up Rugby where he appears to have played at full back.

His playing abilities were described as “Fields and kicks well, but should tackle with more decision in order to make himself a thoroughly good back” (Chanticlere, Michaelmas Term 1912, p29). In the following year he was unable to play regularly and was tried in various positions without much success.

During his first year he was a member of the Footlights comedy club, appearing in a production entitled “The Vegetarians: A Dietetic absurdity in two acts”.

"Putting the port in sport"

In Easter Term 1914 Ayre became a member of the Rhadegunds Society. This was founded in 1873 and made up of men of outstanding sporting prowess for University or College.

In 1914 they adopted a new motto: “Post tot naufragia portum” (After so many shipwrecks, a harbour). Given the student humour of the time, this may go some way to explaining the tag line “putting the port in sport”! In 1914 Chanticlere claimed that “some members take the words in the wrong order, which is an elementary mistake” (Easter Term 1914, p20).

Ayre, “a well-trained Territorial” joined up immediately. As he was in the UK at the time, he joined the Norfolk Regiment. Back home, his brother Eric and two cousins all joined the Newfoundland Regiment. All four men were to die on the first morning of the Battle of the Somme. Further information about this family tragedy may be found here.

Upon his death a fellow officer wrote that his company had led the attack “magnificently… due entirely to his fine leadership”. Apparently he started off the attack “in the most characteristic fashion, smoking his pipe and directing and leading on the men with his stick”! (Jesus College Society Annual Report 1917, pp19-20).