​Alexander Charles Oswald Mitchell came up to Jesus in College in October 1905 after attending Charterhouse School. 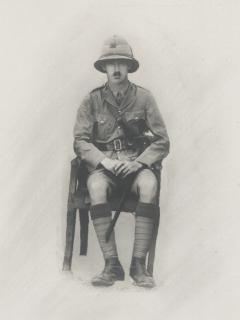 Mitchell only stayed in College for two years before leaving in 1907 to go into business. He took a post in the General Manager’s Office of the Lancashire and Yorkshire Railway and was evidently very efficient.

A clipping recording the death of Mitchell from the Brecon County Times notes that at the outbreak of war he was in charge of the “running of a number of important troop trains over his section” and that Lord Kitchener had commended the operation as it been conducted “through to the minute”.

He was a member of a successful College Association Football team, playing at half back, which successfully negotiated its way out of the second division in the 1906-07.

The Fourth Annual Report of the Jesus College Cambridge Society (p27) records that Mr Watt, the Assistant Tutor and Praelector, held a dinner for the team “to meet other members of the College, both senior and junior. At the conclusion of the dinner and the speeches the company adjourned to finish the evening Mr Watt’s rooms”.

Mitchell joined the South Wales Borderers at the start of the war. After serving in Aden and India he was killed in action at the battle of Bund-I-Adhaim, in Mesopotamia. His photograph and the newspaper clipping from the Brecon County Times, dated 17 May 1917, was sent by his father who was, according to the obituary, a “prominent member” of the Society and to whom they extended “much sympathy” (Jesus College Cambridge Society Annual Report 1917, p30).