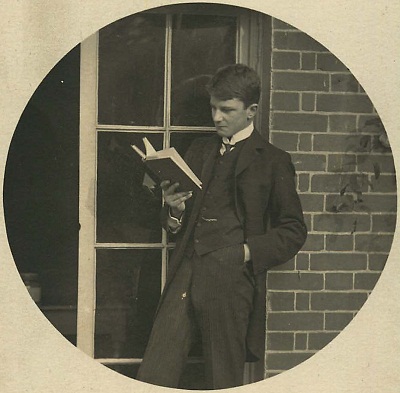 There is no personal information on Elliot in the College archives other than his obituary which suggested that he came up with the intention of taking Orders. There is some information and some images (including the one that we have used with grateful acknowledgement) available here.

It is perhaps pertinent therefore to look at sermon delivered by the Reverend F. J. Foakes-Jackson, the Dean in College Chapel on Trinity Sunday, June 7, 1914. The sermon was aimed at students who would be leaving the College that year on graduation, but it is likely that all students, including Elliott, would have been present. He could not have been more prophetic when he said “The days of training are over, and the campaign is commencing, and the spirit of every man rises at the thought of entering into the battle.”

He concluded: “We aim at giving a religious education. Alas! in these days we, I fear, fall short of this ideal; but may I ask all at least this: - Religion means different things to different men, but it is never wholly absent from those who possess a spirit of reverence and a desire for self-sacrifice for the sake of others.”

The Sermon was published under the heading “University Life” in Chanticlere, Easter Term 1914, pp13 -18.

Elliot gained a commission to the Norfolk Regiment at the outbreak of war and was later wounded at Gallipoli in August 1915. A year later in autumn 1916 he transferred to the Suffolk Light Infantry. He died of wounds received in action in France.

"He died the Noblest death a man may die,
Fighting for God & Right & Liberty
And such a death is Immortality."