William Stobart matriculated in 1912 after attending Rugby School. For some unknown reason his nickname was “Buff”. 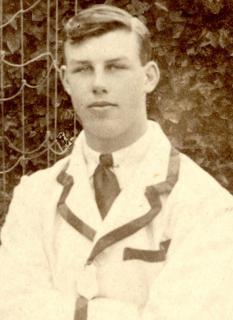 He was a member of Jesus College Boat Club and rowed at bow in the first boat of the Lent Races in 1913 and 1914, going to Head of the River in the latter. In 1914 he also rowed at Henley Regatta in the Thames Cup, losing in the final by ¾ of length to Caius.

Little else is known about his time in College aside from a few lines from “The Song of Hiawatha” by H. W. Longfellow, which is quoted to him on the last page of the Easter Term 1914 Chanticlere, in a section entitled “Answers to Correspondents”:

Buff: “Never heard he an adventureBut himself had met a greater, Never any marvellous story, But himself could tell a stranger”

Returned from Canada for war service

According to a newspaper clipping he was in Canada when war broke out so returned immediately and joined the Durham Light Infantry.

The Jesus College Society Annual Report 1917 obituary for him says that after having been slightly wounded twice he was then appointed to the Royal Flying Corps. He gained his wings within two months and joined his squadron abroad.