William Preston Ainley attended Merchant Taylors’ School and came up to Cambridge in 1906. 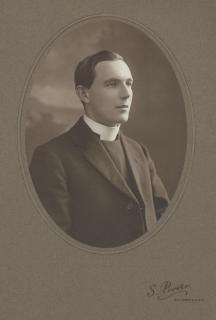 He was the second son of Rev F W Ainley, Rector of Uffington in Stamford. Unfortunately Ainley was a student at a time when one of our main sources of information, the student magazine Chanticlere, was in abeyance so we have very little information on his life in College.

Luckily in the Lent Term 1909 edition of the Chanticlere “once more shakes his dishevelled plumes, and rises aloft to try whether his vocal organs are rusty with so protracted season of neglect” (p1). The magazine had not been published since Summer Term 1905.

In May Term 1909, Ainley was the cox of the first boat in the May races which became Head of the River. The description of the race and the members of the boat is quite fulsome in the Michaelmas Term edition of the reinvigorated magazine.

Ainley, weighing in at 8st 12lbs, was described as having: “Never lost an inch by steering all through the races. He was undoubtedly the best coxswain on the river, but was rather too heavy. He had the knack of always giving his “tens” at the right moment” (p34).

He also went to Henley Regatta in the Summer of 1909, and was commended for “steering perfectly” in the race against London where he “gained us many feet, reducing the corner to a minimum and taking every advantage of wind and water” (p36).

A hope not fulfilled

The Jesus College Society Annual Report obituary for Ainley records that after he was ordained he had intended to become a missionary in China.

But the outbreak of war saw him become a Chaplain to the Forces, where he spent time at Aldershot and Whitley and was about to be sent to the front when he contracted cerebro-spinal meningitis (also known as “spotted fever”).

After six months dedicated nursing in an isolation hospital, William was discharged from the Forces and sent home to convalesce “quite deaf and suffering from acute neuritis” (Stamford Mercury,16th October 1915).

Unfortunately the hoped-for improvement in his condition did not materialise and he died at home on 12 October 1915. He is buried in the churchyard at Uffington and commemorated on the War Memorial in that church.

With thanks to the Revd. Martin Brebner for additional information.