Wilfred Percy Nevill came up in 1913 from Dover College. 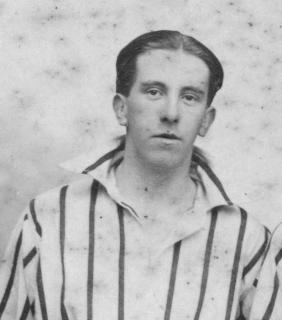 At school he was head prefect and captain of the cricket and hockey teams. At University he was intending to study the Classical Tripos.

He carried on where he had left off with his hockey; the same Annual Report reveals that there was the “only one freshman worthy of his colours”.

This is Nevill, who played at centre half and receives quite a good report in Chanticlere: “his tackling is brilliant but he does not help his forwards too cleverly. Probably would be better at back, as he can deal the ball a shrewd blow” (Lent Term 1914, p46). Our image shows him in College hockey colours.

He had been at College for just a year when war broke out. Judging by his album of snapshots, deposited in the College archives he seems to have lived life to the full during that year.

He and his friends went on motorcycling expeditions, posed with fancy cars and watched Wimbledon Champion A.F. Wilding play an exhibition match. There is even a blurred snap of the famous aviator, Gustav Hamel in the air over Cambridge.

Other images show Wilfred and his friends at CUOTC summer camp at Mytchett in the summer of 1914. Once he joined up in November 1914 he seems to have taken well to army life. He was quickly promoted to Captain and signed up for duty with the regular army.

He achieved posthumous fame for the unusual way in which he and his men went over the top on 1 July 1916. The story was much repeated in the newspapers, and inevitably embellished slightly, but it seems that, in an effort to support and encourage his men as they faced enemy fire, he had brought two footballs to the trenches.

In a letter to Wilfred's sister, his colleague 2nd Lieutenant C.W. Alcock describes what happened next.

“There were two footballs, and on one was printed:- "The Great European Cup-Tie Final. East Surreys v Bavarians. Kick off at zero." On the other in large letters was this: “NO REFEREE”, which was W.’s way of telling the men they needn’t treat the Hun too gently.”

“Five minutes before ‘zero’ hour (7.30 am) your brother strolled up in his usual calm way and we shared a last joke before going over. The Company went over the top very well, with Soames and your brother kicking off with the Company footballs.” Billie. The Nevill Letters: 1914-1916 edited by Ruth Elwin Harris.

The attack at Montauban was successful, but the 18th Division were held up by unexpected German resistance. Montauban Alley did not fall until 5.15 that evening, by which time Wilfred had been killed, hit by machine gun fire just short of German lines. Major A. P. B. Irwin wrote to his mother in tribute:

“He was one of the bravest men I have ever met, and was loved and trusted by his men to such a degree they would have followed him anywhere” (Billie. The Nevill Letters: 1914-1916. p202).

Both footballs were retrieved from the battlefield and preserved by the regiment. One survives at Dover Castle and the other is thought to have been destroyed in 2015 by the fire at Clandon Park, which housed the Surrey Infantry Museum.