Walter Harry Nichols came up to Cambridge in Easter Term 1892. 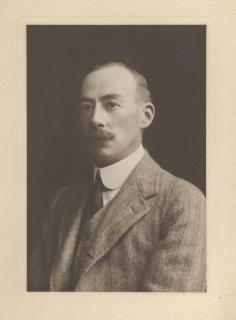 He was the fifth son of Charles Nichols and three of his brothers also attended Jesus College; Joseph Cowie (1879), Charles (1882) and Cyril (1893). His older brothers were to become sheep farmers back in New Zealand. Whilst at Jesus Nichols was a keen sportsman and a member of the Natives. He rowed successfully in several boats. In his first year The Chanticlere reported that he “needs a lot of tubbing and would do well to get some fixed row seating” but “he may turn out useful” (Chanticlere, Easter Term 1893, p99).

He was also a keen rugby player, playing for the rugby nines which is still popular in New Zealand as a form of Rugby League. Nichols was apparently “a very useful half” who “improved a good deal during the season. Tackles well” (Chanticlere, Lent Term 1894, p59).

The following year the report on his ability was not quite so glowing as he was described as “A fair half. His saving is extremely good but he is rather slow in offence. Should learn to punt into touch” (Chanticlere, Lent Term 1895, p181).

He also took part in the Jesus College Wanderers tour that took place over the Christmas vacation in 1893-94 in the West Country, playing matches against Bath, Weston Super Mare, Taunton, Barnstaple and Newton Abbot.

Several other matches had to be called off due firstly to the ground being too hard and then due to snow (Chanticlere, Lent Term 1894, pp60-62).

After receiving his BA in 1895, Nichols joined the army, becoming a Captain in the 9th Battalion, King’s Royal Rifles and serving in the South African War.

Upon the outbreak of war he volunteered and was gazetted to Major in the Somerset Light Infantry. He was wounded at the Battle of Loos in September and then taken to a German hospital where he died on 15 October 1915.