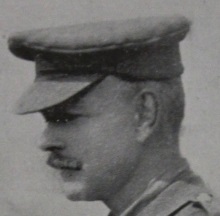 He succeeded his father as 3rd Baronet of Raglan in 1884. Sir William was part of the largest entry of freshmen that had ever joined the College, something noted by the editors of Chanticlere who suggested that: “Trinity and John’s will have to look to their laurels” as Jesus would soon catch them up.

Although they also noted that “Prophecy, is the most gratuitous form of error” they ventured “to predict that before many years are over, Jesus will head the list, even though the attractions of the blood royal may be wanting to us” (Chanticlere, October Term 1886, p8).

It appears that Sir William took an active part in College life, he dabbled with rowing and we see him taking an active part in the Common Room debates which were established during his first year and are recorded in quite some detail in the editions of Chanticlere.

He gave a “sound practical speech” about the difficulties of federation schemes “in the matter of smuggling, protection, tariffs, and the like. Federation was a beautiful idea, but it was so impracticable” (Chanticlere, Easter Term, p29).

Women should be educated to be more than a “walking dressmaker’s pattern.“

In another debate later that term under the motion that “matrimonial engagement shared by the undergraduate is not generally conducive to his greater academical success”. Sir William's contribution to the debate was to say that he “looked forward to the time when women would be educated to be more than a “walking dressmaker’s pattern.” The motion was defeated - For: 19, Against 27.

Napier’s last contribution to these debates come in his final year, Lent Term, 1889. His motion was that the Army needed to be reformed, Chanticleer reports that “He was literally bursting with information, and made a violent and ill-directed attack on the whole army system.”

Student critic of the army

Although the reporter found it difficult to follow all of Sir William’s points, all aspects of the army - “drills, barracks, rations, horses, officers…” were “attacked with vigour”.

After some considerable, possibly acrimonious debate Sir William concluded by saying that the army always managed to win somehow. “We have fought the bear before, boys”. The motion was carried - For: 19, Against: 14.

After leaving university Sir William was called to the bar at Inner Temple in 1894 and was at one time the Lieutenant Colonel of the 7th Royal Welsh Fusiliers from which he retired in 1912.

At the outbreak of war he joined the 4th South Wales Borderers as Major. Somewhat astonishingly one of his sons (also a Jesuan and in the same regiment) was also in Gallipoli in 1915 and was a short distance away when his father died.

His son, Sir Joseph William Napier (1913), describes the moment that he was called to see his injured father in an interview given in 1984 and available on the Imperial War Museum website