Ronald Whidborne Elverson came up in 1909 from Dover College. 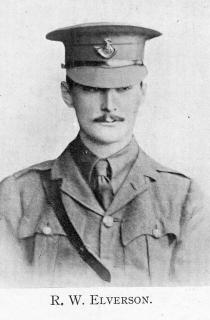 He was one of many young men to arrive from Dover College, where the Headmaster at the time, Revd W.C. Compton was a Jesuan. While at College he was a member of the Boat Club and rowed in the 2nd boat at Lent 1911 and 1912, weighing in at 11 stone 1lb and occupying the number 4 seat. By May 1912 he had moved to the No.2 seat in the 3rd boat and had put on weight, tipping the scales at 11 stone 2½ lbs. Perhaps he had been busy studying for his exams, as he graduated at the end of that term.

The fortunes of the Jesus 2nd boat had been mixed. The editor of Chanticlere was characteristically scathing about the 2nd boat’s performance in 1911: “…we cannot help feeling that, as they have to deal largely with first boats of the smaller colleges, which come up a week before the beginning of term to practice, they should do likewise” (Chanticlere, Lent 1911).

By Lent 1912 the 2nd boat was doing very well, making three bumps (Pembroke II, Lady Margaret II and Clare I) and narrowly missing out on catching the Queens’ boat “especially at Ditton where a few feet saved them” (Chanticlere, Lent 1912, pp30-31).

After leaving College, Elverson became a schoolmaster at Ellesmere College, Shropshire. Our image of him was kindly supplied by The Ellesmerian Club.

Elverson was last seen by comrades badly wounded at the Battle of Loos in September 1915. Although the Commonwealth War Graves Commission has his date of death as 1918, it seems likely that the 1915 date is correct.