Robert Henry Watkin Brewis came up in 1892 from Harrow School and resided for one term. 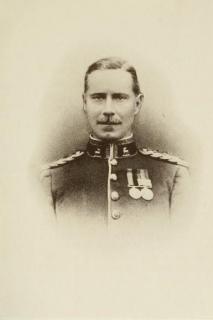 The College Register records Brewis as being resident until Christmas 1893, then as a non-resident until Midsummer 1894. He does not return in Michaelmas 1894 and never resumed his College career.

He appears to have played no active role in College social life - there is no mention of him in the student magazine Chanticlere and he was not here long enough to take his degree (which was not unusual at the time).

Perhaps due to the brevity of his time at Jesus he was initially omitted from the Roll of Honour in College and from the University War List.

It is apparent that a review of the war memorial undertaken by Freddie Brittain revealed that the name of Brewis and two others were missing and should be added to those commemorated. This explains why his name is one of the ones that appears out of order at the bottom (Chanticlere, Lent Term 1944, p5).

At the age of 41, Brewis was one of the older men to have been killed. He joined the army in 1895. By 1900 he had been promoted to Captain after serving in the Sudan Campaign in 1898. He continued his army career at the Staff College where by 1912 he became a Major.

He was killed at the head of his men during one of the disastrous attacks on German trenches near Armentieres in December 1914. Our image is taken from Harrow Memorials of the Great War.