Robert Harold Beckh came up in 1913, having been elected to an exhibition, and afterwards to a scholarship in 1914 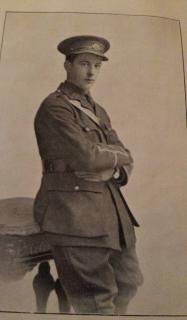 "Keen on all field sports"

There is little information on Beckh whilst he was a student here although the Jesus College Society Annual Report, 1917 obituary for him claims that he was “keen at all field sports, and was especially good at hockey” (p19).

However, in a newspaper cutting, kept in a scrapbook maintained by the then head porter, James Hoppett, it claims that “Rugby football was perhaps his best sport”.

The same newspaper cutting also suggests that Beckh, along with his Cambridge friends enlisted as a Private with the Royal Fusiliers (Public Schools Battalion), "believing that the best training for an officer was through the ranks.” He was gazetted to the East Yorkshire regiment in June 1915.

“Swallows in Storm and Sunlight”

Intriguingly in a book of biographical notes on members of the College from 1901-1920 it says that Beckh “was said to be a poet”.

There is some further proof of his abilities as a poet in a letter sent by Victor Beckh to the Master in 1920, with a contribution to the College war memorial. Mr Beckh writes “I take the liberty of sending you a copy of some verses by my late son”.

This is likely to be the posthumously published Swallows in Storm and Sunlight (London: Chapman and Hall, 1917). Sadly the College no longer has a copy of the book. However it is available in Cambridge University Library.

The first verse of NO MAN’S LAND

"Nine-Thirty o’clock? Then over the top/And mind to keep down when you see the flare/Of Very pistol searching the air./Now, over you get; look out for the wire/In the borrow pit, and the empty tins,/They are meant for the Hun to bark his shins./So keep well down and reserve your fire/-All over? Right: there’s a gap just here/In the corkscrew wire, so just follow me:/If you keep well down there’s nothing to fear."