Paul Holman, came up to Jesus College in Michaelmas Term 1910 from The Leys School, Cambridge. 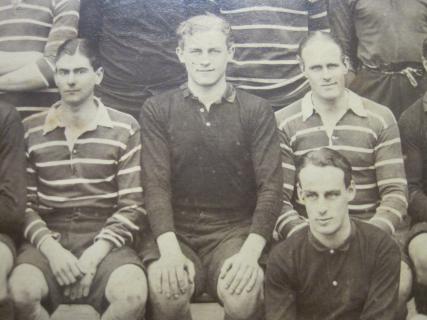 He took papers in Law, graduating with a BA in 1913. His brother, Alwyn Haswell Holman was in his final year as a History student when Paul arrived. Both brothers played rugby for the college, both as forwards, and played together in Michaelmas Term 1910.

Paul continued to play rugby for the college throughout his three years in residence. He is in the centre of our image, taken from a team picture from a Jesus College vs Trinity College, Oxford match, in which he obviously towers over the other players in the row.

Paul was also a member of an almost invincible College Lacrosse team for the entirety of his student days. We don’t know the exact position he played in other than that he played in defence.

The Jesus College Lacrosse team won the intercollegiate cup in all three of the years in which was in the team. In fact they went undefeated in the 1911-2 season. In 1913 the team beat King’s in the Challenge Cup final by 10 goals to seven, the cup turning out to be a College soup tureen! (Chanticlere, Lent Term 1913, p34).

Paul also took an active part in the College Rifle Club throughout the three years he was a student and was a busy and popular man.

"The most charming fellow"

Paul was killed in action on 17 February 1915. He had enlisted in the H.A.C. as soon war began, without waiting for a commission. His commanding officer described him as “a splendid type of young Englishman and a fine soldier” and had already given him the highest recommendation for a commission.

The obituary also includes comments from another Jesuan, Percy Light (1901), who fought alongside him at the front. Light wrote on Holman’s death that “He was the most charming fellow.” And as the obituary concludes: “That was the opinion of all who knew him”(JCCS Annual Report 1915, p29).

N.B. Both the other Jesuans mentioned in this profile survived the War. Paul’s brother Alwyn served in the RNVR and was later killed during an air raid in September 1940 at the age of 51.

Percy Light served in the Cheshire Regiment and was awarded the Military Cross. He died in 1941 in Lusaka, Northern Rhodesia (now Zambia), just after his 59th birthday.

Paul's younger brother, Herbert Leigh Holman came up to the College in 1918. He went on to marry the actress Vivien Leigh.