Owen Vincent Thomas came up to Cambridge in 1912 after spending his school years at the United Services College in Windsor.

Died of injuries received in a flying accident: 29 July 1918 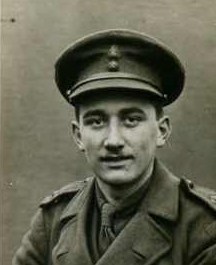 Thomas went on to get his BA on 16 July 1915 by virtue of his military service, although he was not present at the congregation.

He received a commission to the Royal Welsh Fusiliers at the start of the war but later transferred to the Royal Flying Corps (later combined with the R.N.A.S. to form the Royal Air Force) where he became a Flight Commander and Captain. His war record is not recorded in the College Archives but his obituary records that he was mentioned in Sir Douglas Haig’s despatches on 7 April 1918.  He died just a few months later when his plane caught fire over Epping Forest while attempting a landing at North Weald airfield. (Annual Report, 1919, p. 33)

​A memorial tablet in Skenfrith Church reads: "A good pilot, a gallant officer, a most delightful companion and a popular and unassuming gentleman. This small tribute is erected by one of his comrades of the Battle of the Somme of 1916"

More information about Owen, including the image featured on this page may be found here