​Noel Elliot Hawdon came up to Jesus College in October 1905 from Charterhouse School in Godalming, Surrey.  He attained his BA in 1908. 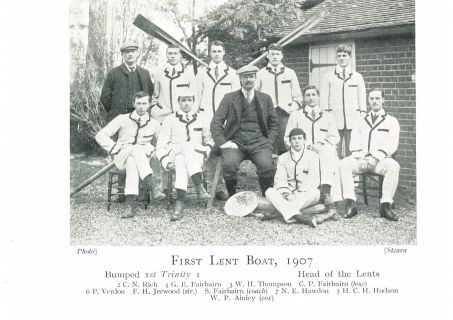 Hawdon was a keen and successful rower and his statistics in the Jesus College Boat Club records are quite impressive: “1906 winning Clinker Four; 1907 head of Lents, winning Clinker Four, winner of Lowes, 1st May Boat, winning Coxswainless Four, Trial Cap; 1908 winner of Lowes, 1st May boat”.  He was, of course, in College when Steve Fairbairn had just returned as a coach to the Boat Club and you can see Hawdon sitting next to him in the image on the left.  Hawdon was also the Secretary of the Boat Club in the 1907-08 season.

Unfortunately, the student magazine was not in print during Hawdon’s time in College so it is difficult to find out anything else about him. This is a little frustrating as his obituary in the 1919 Jesus College Cambridge Society Annual Report “he did much to improve the college choir”. (p24)

After leaving College in 1908, he was ordained in 1909, held a few curacies in Britain before emigrating to New Zealand.  He returned to England in 1916 and, according to his obituary, joined the Army as a Chaplain in August 1918, after a month’s training he was then sent to the Front where he caught influenza and subsequently pneumonia.  He died in a General Hospital at Wimereux.