Education of women at University level had begun in Cambridge by the end of the 19th century, although they were not allowed to take degrees until 1948.

They were also limited to all female institutions, including Girton and Newnham Colleges. By the 1970s, however, attitudes were changing and a report to Council by the then Senior Tutor, Bruce Sparks, highlighted how applications from men had been decreasing and that there was growing popularity for mixed colleges. Furthermore the then JCR also asked Council to change the statutes in order to permit the admission of women. However, some raised concerns, including the costs of supplying special provisions to women, whether they should be allowed to study certain subjects and whether new female students should have their own especially assigned tutor. In 1976 the College statutes were changed to permit the admission of women, and the first female undergraduates arrived in October 1979. On their admission, however, the immediate benefits were apparent through their instant contribution to College life.

The first reference to the topic came in June 1964, when a Fellow proposed that "the Council... investigate and report on how the College could be made a mixed Society of men and women." Although it was decided that "the climate was not yet right", soon afterwards the University repealed its statute prohibiting mixed Colleges.

Many of the fellowship and the Master at the time, Sir Alan Cottrell, were firmly in favour of the admission of women. Indeed, in January 1974, the then senior tutor Bruce Sparks warned that applications for undergraduate places were at a low ebb, at less than two applications per place, and that by admitting women the College would "likely... have a larger share in better quality applicants".

On 13 June 1974 at a meeting of the Society (that is, a meeting of all the Fellows) it was said that, in principle, the College should have the power to admit women as members. In turn, the Admissions Tutor prepared a statement of the conditions which should govern the admission of women to the College.

Of the College statutes, point 1.6, “No woman shall be elected or admitted as Pensioner, Scholar, Officer, Fellow, or Master of the College”, was the real obstacle concerning admission of women. It was simply repealed by order of the Society on 22 November 1974.

This was followed on 30 May 1975, when "The Society... resolved by the votes of the Master and thirty-six Fellows (three Fellows voting against and two Fellows abstaining) to make new Statutes for the College... and to submit the new Statutes for the approval of Her Majesty in Council." This approval was obtained on 4 March 1976.

The first admission of women Fellows and postgraduates

On 10 May 1976, at a meeting of College Council, the first woman Fellow was chosen: Dr Lisa Anne Jardine. For a year Dr Jardine was the only female Fellow of the College, but in 1977 the first female Research Fellow, Vivien Law, was elected, and Susanne Kappeler and Kathleen Wheeler joined her the following year.

There were different considerations around admitting women undergraduates, however. University wide discussion concerning the admission of women, mainly being achieved through the Colleges' Consultative Committee, had to be taken into account whilst practical changes within the College itself also had to be planned for.

Following these preparations, the first cohort of 31 women undergraduates were admitted in 1979, and the first female President of the Junior Common Room held office from 1981 to 1982.

Support from undergraduates was strongly in favour of a mixed College. In June 1974, the Junior Common Room (JCR) reported to Council that "Support for co-residence within the undergraduate body is known to be very great" and that "undergraduates look forward to improvement in the social atmosphere of the College as a result of its introduction". However their main point was that "education should be open to all... regardless of sex."

Tutorial and domestic questions were considered by a committee of Fellows which reported in early 1977. They estimated that between 25 and 50 women undergraduates would join the College in the first year, and noted that "any arrangements should be able to cope with up to 100 women in College at any one time".

On the tutorial side little change was to be made although it was recognised that on occasion specific problems of female undergraduates might need to be handled by senior members of the College who were either "a woman, or... a married family man".

As regards accommodation, it was felt that there should be a certain degree of segregation based on the practicalities of providing "separate bathrooms, showers and loos" but that "women should be given the choice of being on segregated... or mixed staircases, but with total privacy and reserved lavatorial facilities." This was achieved through minor alterations to the more modern accommodation but, due to expense and difficulties in updating plumbing, the oldest buildings were reserved for men.

However, in the two College hostels and nearby licensed lodging houses in Jesus Lane and Malcolm Street these plans hit an unforeseen obstacle: "Opposition to women students by lodging-house-keepers." In the longer term, for a mixture of reasons, the lodging house system was abolished and the College took on the management of the houses. 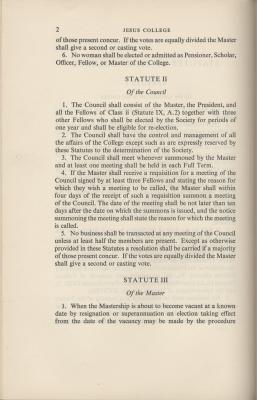 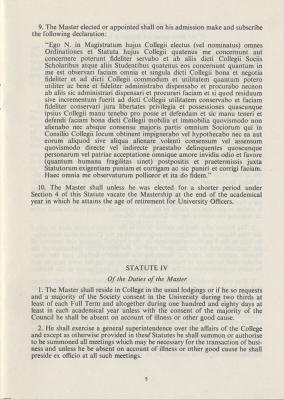