Although there is some evidence of the types of work women undertook for the College prior to the 18th century, it is not until the mid-1700s that evidence in the College Archives really demonstrates just how varied that work was.

The images in the image gallery below are just a small sample of numerous receipts from the College Archives received from and signed by women providing goods and services to the College from the second half of the 18th century. Their apparent educational capabilities are also illustrated through the receipts; some are clearly very literate, having written and signed their invoice, whilst others have had the bill written for them before signing it with ‘their mark’ (usually a cross). It should be remembered that these women were not only working for Jesus College, but also for many other Colleges, businesses and individuals across the town and so the amounts noted in the receipts, in pounds (£), shillings (s) and pence (d), represent just a fraction of both their total annual income and their total workload.

The following is also a list of names of the women who worked for the College during the 18th century alongside any surviving details of their occupation and personal life that has so far been discovered.

Mary Bangle, a chimney sweep, is mentioned only once in the Archives, although she is known to have also swept chimneys at Corpus. As with some of the other women working for the College in this period, Mary appears to have been unable to write her name and so signs the bill with ‘her mark’. Mary was born in Harston, Cambridgeshire, on 31st January 1713 to John and Martha Bangle.

Ann Press (nee Standley), chimney sweep was the College’s other female chimney sweep of the 18th century. Ann’s husband, William Press (sometimes written Prisse) also swept the college chimneys between 1777 and 1784. Note in the receipt shown below the spelling of chimneys as ‘Chimbies’. The couple married on 11th October 1773 in Wisbech just prior to moving to Cambridge and before sweeping the chimneys in College. By the early 19th century the Press family had significantly grown their business and they became quite prosperous whilst doing so. A son or grandson, also William Press, was the tenant of a College property in King Street from 1808, acquiring the freehold of 35-37 King Street by 1835. Robert Press, his son, acquired further property on both King Street and built four cottages on land on the site of Malcolm Street that he leased from the college. Two larger houses were built in 1848, one of which he occupied. Unfortunately, these properties were all demolished in 1965 as part of the wider King Street redevelopment.

Sarah Leach (nee Jagger) worked as a cleaner, the scullion and kitchen help from 1763 to at least 1789 (when the records stop). In addition to washing plates, Sarah’s duties differed from the other scullions as she was also paid for ‘taking care’ of the Hall fire. Sarah was buried in All Saints, Cambridge parish on 2nd December 1807 aged 70, making her about 26 when she started working for the college in 1763. She appears to have married Thomas Leach on 26th August 1786 at All Saints church.

Ann Cowling was a chaise owner and she was married to William Cowling who regularly hired a ‘chaise’ (a type of small carriage) to College representatives to travel between Cambridge and the College’s estates and manor at Graveley, Cambridgeshire. The note shown below actually refers to the hire of a chaise by Ann to the College for travel to ‘Diten’ or Fen Ditton. The College Archives have William listed as an innkeeper and tenant of the College before he bought 18 Jesus Lane in 1783. When the same property was then sold to Samuel Smith (unfortunately not the same Samuel Smith who founded the famous Yorkshire brewery!) in 1790 the building was being utilised as an inn, known as the Crown, which acted as a stop for one of the London coaches. Cowling also acquired 23-24 Jesus Lane in 1773, converting the western most house into a pub which, by 1780, was called the Wagon and Horses. Numbers 23-26 Jesus Lane were on the site of the present Rank Building in West Court, whilst the Crown and 18 Jesus Lane were roughly where Marshall’s garage once stood.

Ann Ivers married James Ivers, the College painter, and appears only once in the College records, where she signs the receipt below to acknowledge payment on behalf of her husband in 1761. The list of works done is typical and includes such items as whiting and blacking chimneys, “painting the Hall in olive colour and blacking the bottoms of the panelling”, painting sash windows and painting handrails and banisters in staircase. Ann is also known to have undertaken work at Corpus on 14th January 1754. She was buried in St. Michael’s, Cambridge graveyard on 20th December 1784 aged 67, whilst James died on 27th June 1773 aged 58.

Elizabeth Painter, a glazier, was married to Matthew Painter. Elizabeth’s son Robert is seen in the receipt below collecting his mother’s payment on her behalf. The following year Robert appears to take over from his parents as College glazier. Robert was baptised on 21st January 1740 at Holy Sepulchre Church (the round church) on the same day as a Susanna Painter, suggesting that the two were twins. An Elizabeth Painter was buried in All Saints, Cambridge graveyard on 6th February 1778, although it has not been possible to confirm if this is the same person.

Mary Munn, an oil supplier, like many female suppliers of goods to the College, collected payments on behalf of their husbands as well as supplying the College directly with materials and services themselves. The receipt dated 1777 in the image gallery below demonstrates Mary collecting payments for her husband Jonathan Munn, oilman. Mary’s will outlines various benefactions that included £100 each to her nephews, John, Henry and Daniel Readhead and her nieces Sarah Pratt and Mary Deighton; £20 to Addenbrookes Hospital; £30 to the poor of Great St. Mary’s; and £20 to charity schools in Cambridge. The Sun Fire insurance policy taken out by Jonathan on 17th January 1792 was in conjunction with William Readhead, who is likely to be Mary’s brother. A Mary Readhead was baptised in Great St. Mary’s on 5th October 1721, which would have made her 18 at the time of her marriage to Jonathan. She was buried on 29th November 1796 whilst Jonathan was buried on 17th February 1792.

Ann Chafer, a laundress, was the daughter of another College laundress, also called Ann Chafer. Mother and daughter were working together between 1755 and 1758, as is demonstrated by the alternating use of the mother’s ‘mark’ (who presumably could not write) and the signature of the daughter who could. The receipt shown in the image gallery provides an example of her signature. Ann married Edward Harper on 10th April 1768 and changed her signature correspondingly, as shown in the second receipt, dated 1774, relating to her shown below. After Edward's death, Ann married again to become Ann Beaumont, as appears in the stewards accounts for July 1786. Of all the women we know to have been employed by the College in the 18th century, the documentary evidence suggests Ann Chafer/Harper/Beaumont was the longest serving. The first invoices submitted by her were in 1755 and she still appears in the accounts in 1789. Unfortunately, as there is a gap in records detailing names between 1789 and 1814, it has not been possible to work out exactly when Ann stopped working for the college.

Sarah Holiday (née Harrison), a clock keeper and repairer, maintained the chapel clock from 1770 to at least 1783, and in this time she submitted numerous receipts including the example below. We know Sarah’s maiden name was Harrison as a bill from 30th September 1777 has a note written on it by John Harrison that reads, “rec[eive]d the contents for my daughter Holiday”. John was no stranger to the College, however, having supplied ash trees four years previously. Sarah was born on 18th March 1740 to John and Hannah Harrison and married Nathaniel Holliday at St. Bene’t’s church, Cambridge, on 29th October 1759. Nathaniel, who is described as both a clockmaker and a watchmaker, died in 1770 aged 36 and Sarah continued to run the clock repairing side of the business, first appearing in the receipts in that same year, but being paid along with a James Staplin for ‘attendance’ on the college clock. From 1771 onwards, Sarah is paid in her own right. The large clock mechanism from Foxton parish church that is shown here is of a type that Sarah would have been very familiar with, being similar in size to the one she maintained in the Chapel. 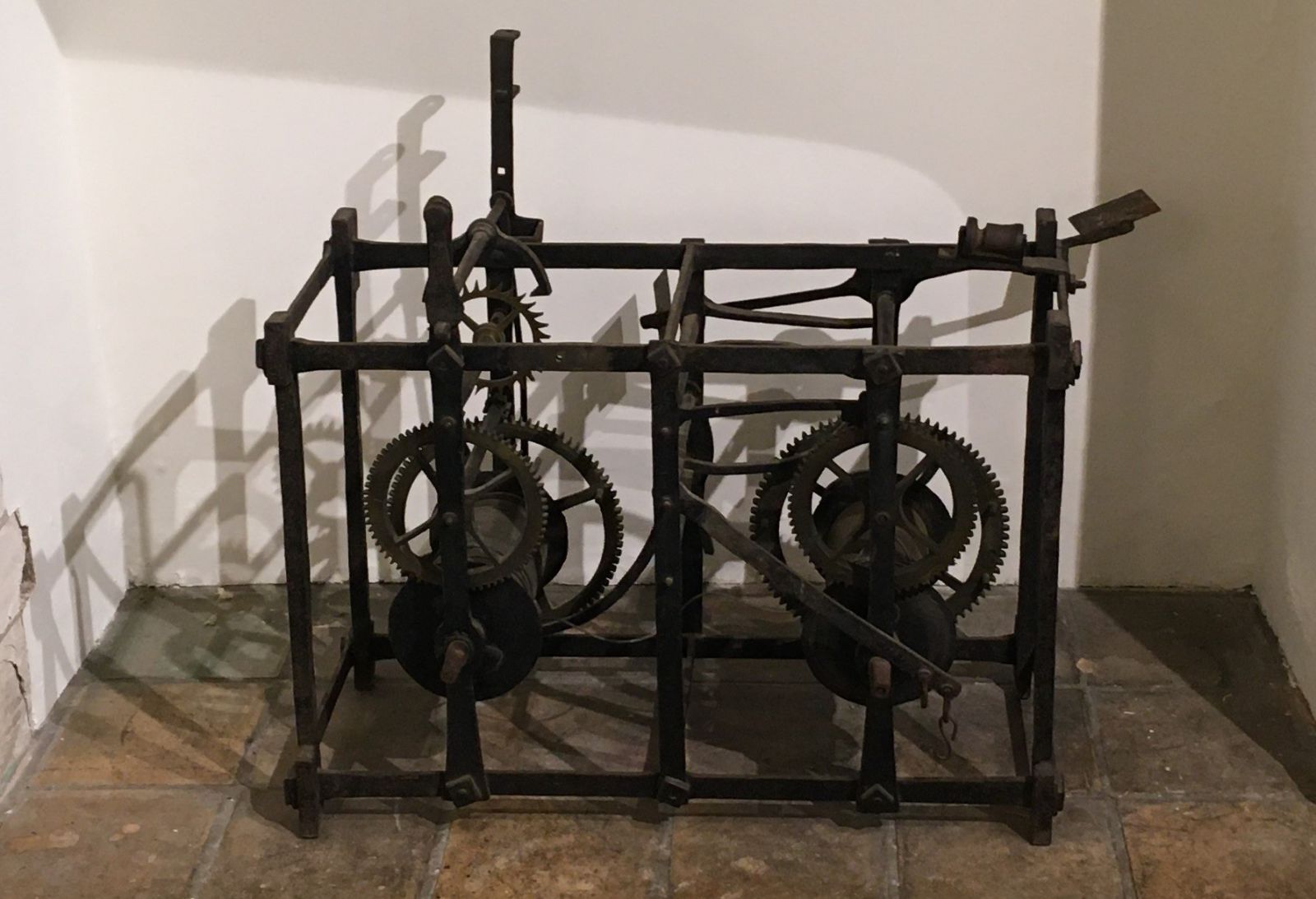 Like the Press family, the Holliday family rented property from the College. The father of Nathaniel, also Nathaniel Holliday, a gardener, rented ‘a tenement, barn, stable and orchard’ from January 1723 on King Street (then known as Walles Lane) and is listed in the college accounts as still renting property from the College in 1744. Nathaniel Holliday (the elder) and John Harrison’s connection to gardening is interesting in that it   might potentially explain how Sarah and Nathaniel met.

Margaret Forster is distinguished as being the College’s ‘bricklayer’ between 1758 and 1783, and demonstrates in her consistently lengthy invoices, that she was not likely to be laying bricks herself but was managing small teams of men, usually two or three at a time (although up to ten), to do the work she had been commissioned to undertake. The receipt below is typical of those submitted by her and lists examples of her work such as pointing the Chapel windows, mending walls and bricking up a doorway in the Fellows garden. Being in this managerial position suggests that she might have succeeded or inherited the business from her husband, although there is no reference to a Mr. Forster acting as the College’s bricklayer prior to the first reference to her in 1758. Having originally been referred to as ‘Margaret Forster’, she is first referred to as Mrs Forster in 1774, although this could be following the then more conventional acknowledgement of respect for a woman’s seniority rather than necessarily referring to her marital status. Frustratingly it has not been possible to find a record of Margaret’s baptism, possible marriage or burial. 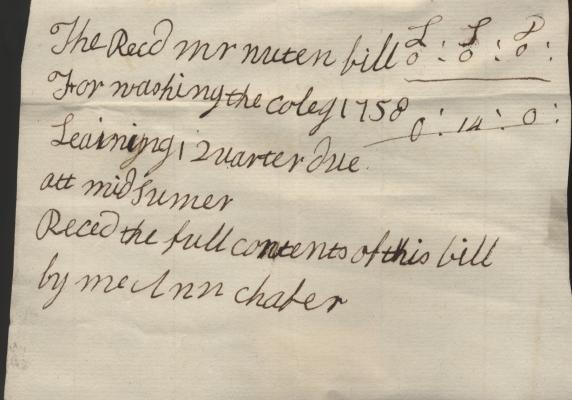 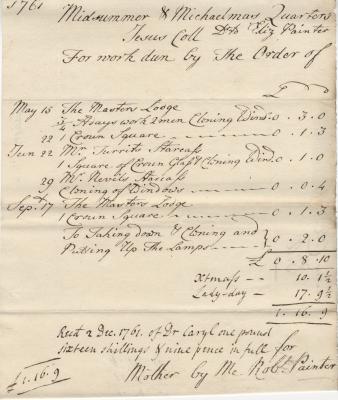 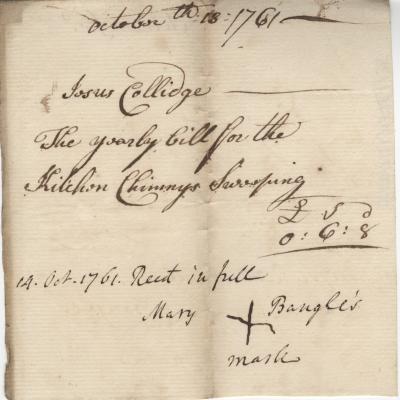 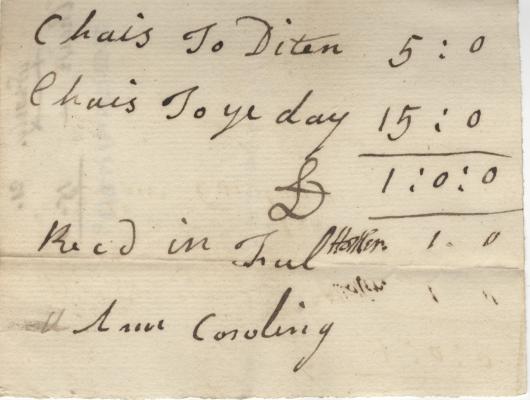 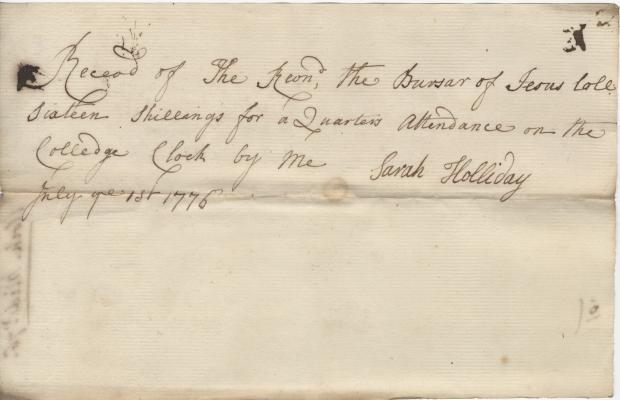 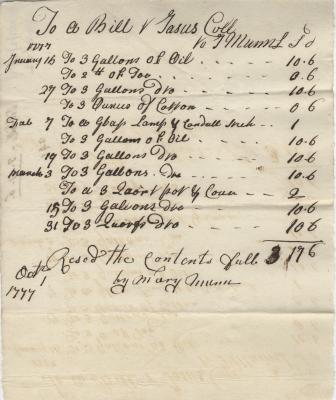