On the College’s foundation, the new community of Fellows and Scholars immediately moved into the remaining, and apparently semi-derelict, buildings of the Priory.

Buildings surveys and archaeological reports show that, where convenient, elements of the existing structures of the Priory were integrated into the new College buildings (the nuns’ Chapterhouse entrance in Cloister Court is a good example of this, only being rediscovered in 1893) or were demolished in favour of completely new buildings. New sources of income were required for these developments, as indeed they were for the founding of scholarships and fellowships, in order for the new College community to flourish. This was an expensive undertaking which required support from generous benefactors to supplement the income from the College’s original endowment of land and property transferred from the Priory. Benefactors either directly supplied funds for building projects or bequeathed land and property, the incomes from which were used to support scholarships or fellowships.

One of the earliest significant benefactors to the College was Lady Katherine Bray. The youngest daughter of Nicholas Hussey, a victualler of Calais and sheriff of Surrey and Sussex, Katherine was aged 13 when she married Sir Reginald Bray in about 1475. Both Reginald and Katherine were important figures in their time. Reginald was deeply involved in the households of Lady Margaret Beaufort and Henry VII (being appointed the chancellor of the Duchy of Lancaster in 1486) whilst Katherine also advanced through the household of Lady Margaret and was an early friend and lady in waiting of Elizabeth of York. Both the Brays provided for the early building of the College, Katherine specifically funding the construction of the grammar school, which was part of the original foundation established by Bishop Alcock. She also provided for the salary of the schoolmaster. The grammar school was closed in 1575 following recommendations made by the Royal visitation in 1559, after which it was altered internally and incorporated into the main College buildings. It now makes up A and B staircases. The image above is taken from a painting and it shows what is possibly the first positively identified image of Katherine. Monarch receiving his consort (Unknown artist, c.1700, Fothergill Family, Stanford Hall, Lutterworth) depicts the marriage of Henry VII to Elizabeth of York and shows various other figures, including Reginald Bray to the far left of the painting. The figure with the long beard is likely to be the Archbishop of Canterbury. The five women standing behind Elizabeth of York have not been identified, but it is possible that the woman in the white bodice and green dress is Katherine Bray, wife of Reginald Bray and early benefactor to the College, based on similarities between the pattern on her bodice and the symbol used in Bray’s coat of arms.

Lady Jane Price (also Joan/Joanna and alternatively Pryse) was married to Sir James Price and she provided funds enabling the College to buy ‘Sedge Hall’ in St. Clement’s parish, Cambridge, the income from which would pay for two scholarships. The recipients had to come from either St. Vedast (where Jane lived at the time of the deed being signed) or St. Peter the Poor parishes (where she was born) in London, Anglesey (from where her first husband hailed) or Merioneth, where Sir James resided. After the donation, the scholars were to be chosen by Jane and her husband during the remainder of their lifetimes. Part of the Sedge Hall property was also known as the Ship which, by the mid-17th century, was being run as an Inn. The property also comprised two cottages and a warehouse. The properties remained in the possession of the College until 1909, when they were sold to Magdalene. The name Sedge Hall refers to the original use of the area as a storage place for sedge, a type of reed used for thatching, kindling, fuel, padding material, and as a floor covering. Wicken Fen, to the north east of Cambridge, is one of the few places in Cambridgeshire where sedge is still grown.

The scholarship foundation deed dated 25th May 1620 (ref: Caryl.16.3) represents a property transaction between John Owen (Fellow of Jesus, 1599 – 1609), his wife Sara, another relation, Francis Owen, and Jane Price. The deed describes Jane’s “great zeale and good devotion for the advancement of gods true Religion and literature” and how she wanted to demonstrate this by providing the scholarships. It is not clear why she chose to support the scholarship at Jesus rather than any other College, as it appears that neither Sir James, nor her deceased husband, had any connections to Jesus College. However, some sources suggest that her maiden name was ‘Owen’ and so perhaps there was some familial connection between her and John Owen. 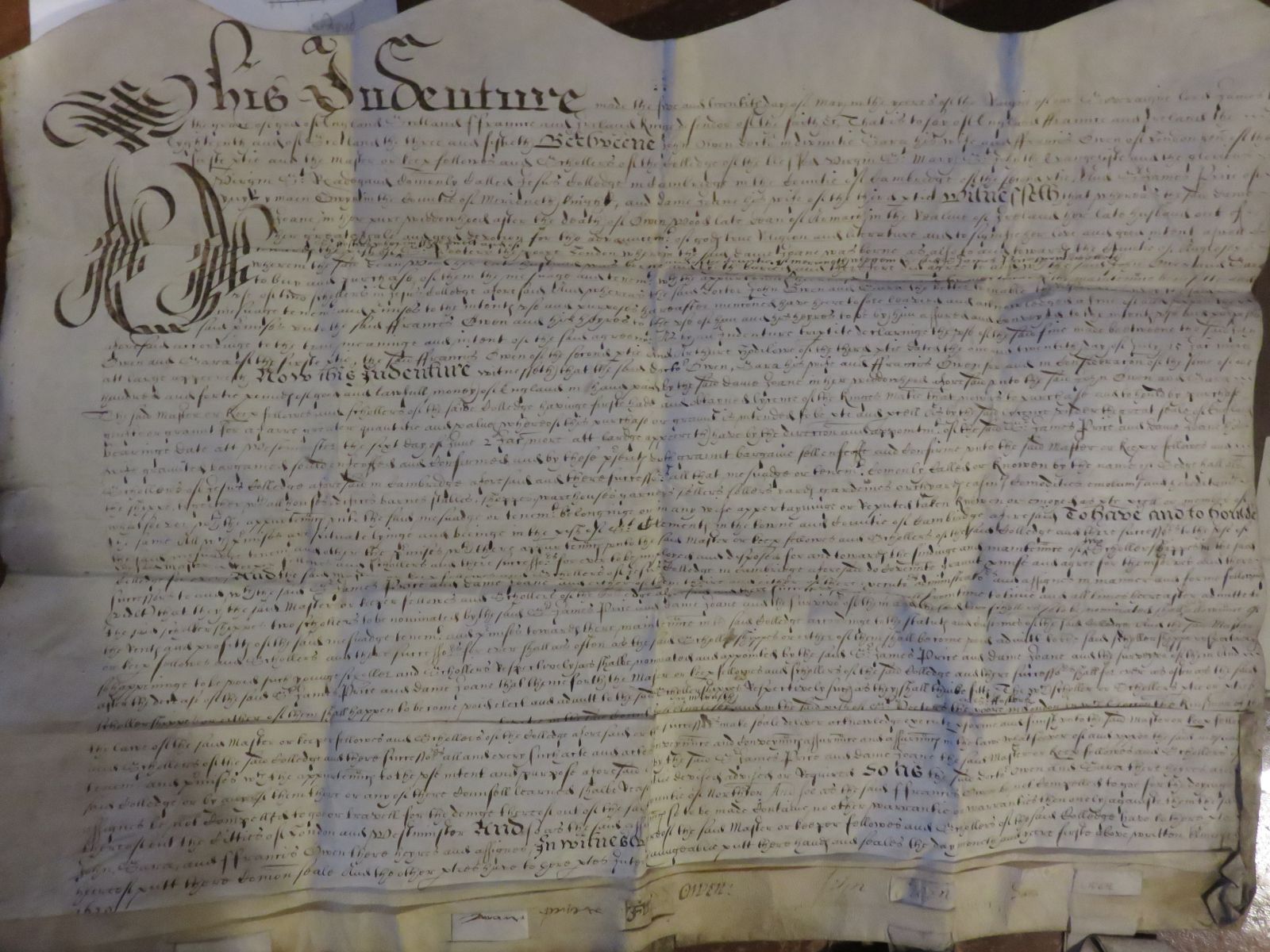 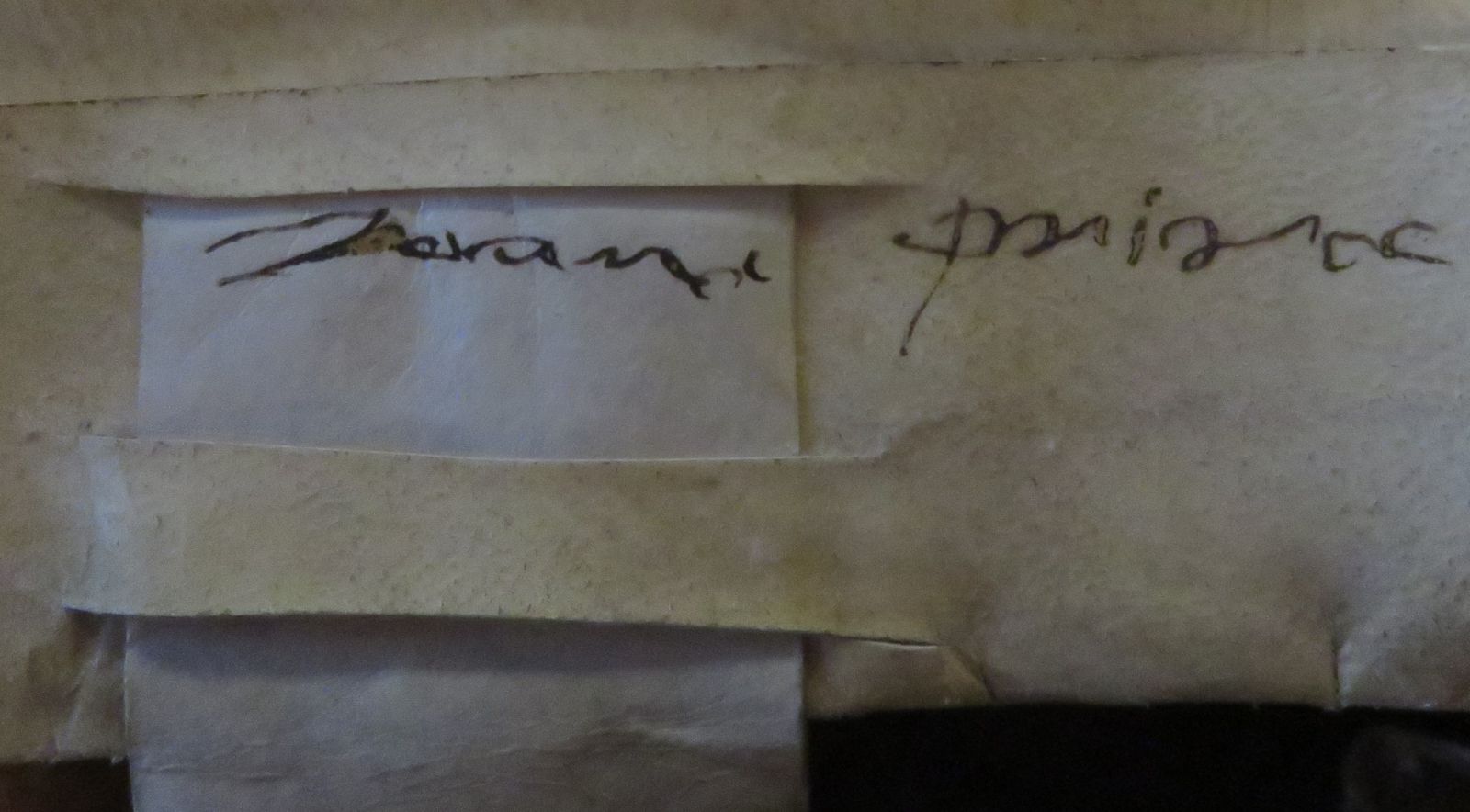 Additions to the advancement of education also came in the form of book donations. Margaret Cavendish, Duchess of Newcastle (c.1623 – 1673) was a prolific writer, producing an autobiography A True Relation of my Birth, Breeding, and Life (1656), the utopian work The Blazing World (1666), numerous poems and plays, and various works of philosophy. However, her perceived eccentricities seem to have prevented her from being taken seriously in her own time and it is only recently that she has been reconsidered from a more modern feminist perspective. Indeed her work The Blazing World, led to her being considered by some as the first female science fiction writer. In the hope that she would be taken more seriously, however, particularly with regard to her thoughts on philosophy, she gave the majority of Colleges in both Cambridge and Oxford copies of her books, including her Grounds of Natural Philosophy (1668). 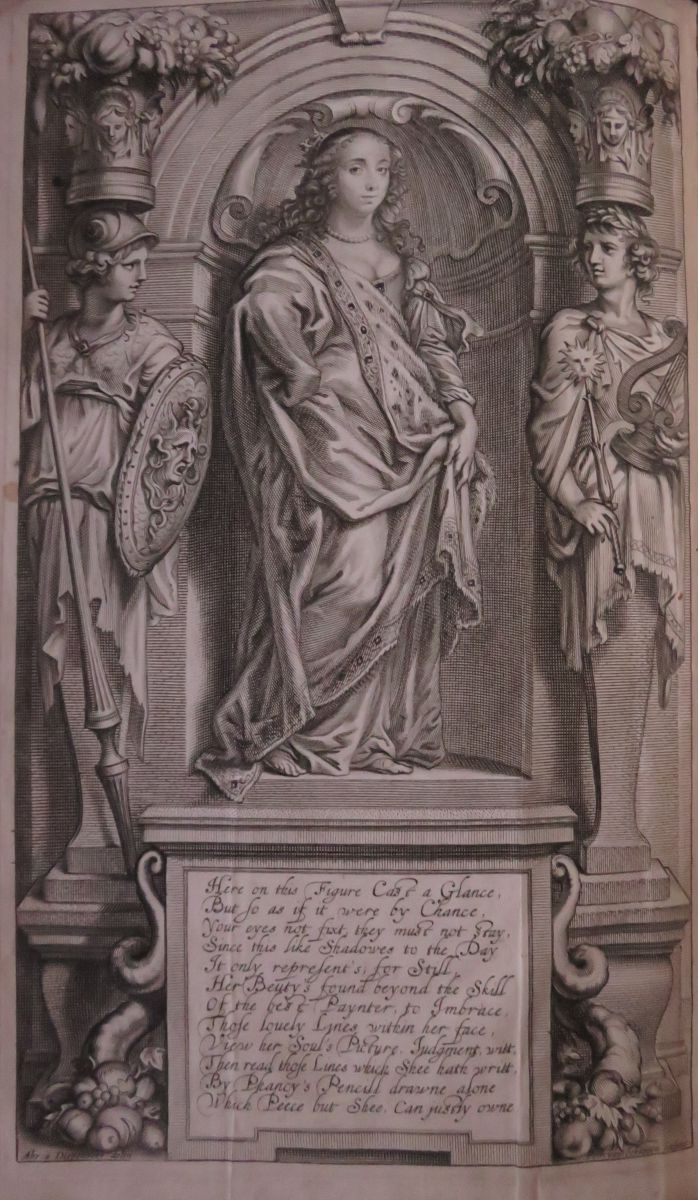