Maurice Austin Murray was due to come to Cambridge in October 1914. 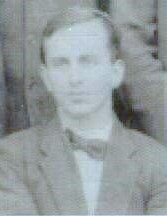 He was the son of a clergyman, Revd. Frederick Auriol Murray and his wife Jessie Murray, of Chigwell Vicarage, Essex.

He was educated at Eagle House, Sandhurst, was a Classical Scholar at Haileybury (our image comes from Haileybury's records) and had won an open Rustat scholarship to study at the College.

We do not know what kind of College career he would have had, but reports from Haileybury suggest a hard working boy who had gained a scholarship, was Head of Colvin House and Captain of football, playing in the school XV.

Unfortunately the War intervened and he joined the Public Schools Battalion in August 1914. After promotion to Lieutenant he joined the Essex Regiment and became one of the 371 casualties that the regiment sustained at the battle of Loos.

His obituary states “Reports are unanimous as to his gallantry in leading his men. The last known of him is that he was severely wounded” (Jesus College Society Annual Report, 1917.)