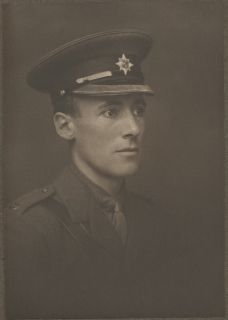 This is little mention of Carver in the College archives other than as a member of a disappointing association football team. The Chanticlere lamented, in Lent Term 1905, “Who would have thought when Jesus were head of the First Division, having gone through the season without suffering defeat, that in two years’ time we should descend to bottom place and be forced to start the next season in the Second Division?”. (p. 544)

We also have a photograph of the Jesus first and second Hockey Eleven, Lent 1906, winners of the University Hockey League First and Third Division and Carver, is shown in the back row. As he is not mentioned in the Annual Report it is likely Carver was in the second team.

We also know, from a cutting from The Cambridge Independent Press of 13 March 1903 that Lionel appeared before the Borough Magistrates. He was fined 5 shillings (the equivalent of about £10 today) for riding a bicycle on the footpaths of Midsummer Common.

His obituary in the Jesus College Cambridge Society Annual Report 1919 records that he joined the Bombay-Burmah Trading Corporation after leaving Cambridge in 1906 and spent the following ten years in the Rangoon.  It goes on to say that he joined the Rangoon and Moulmain Volunteers at the outbreak of war before returning to Britain “for further military training in March 1917”, where he joined the Irish Guards and proceeded to the front in December 1917.