Lancelot Edwin Ridley came up to Jesus College from Eastbourne College in 1910. 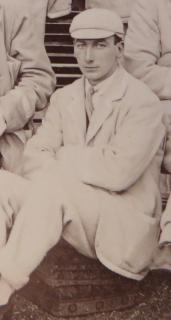 He graduated with a BA in 1913 after having taken special papers in Law (I and II) and Political Economy (I and II). He did not, however, leave in 1913 but stayed on one more year in order to cox the Cambridge boat in the University Boat Race. He became a student at the same time that another University boat cox, C. A. Skinner (1908) was at the College, so his career as coxswain started in the second Jesus boat at the 1911 Lents (when Skinner did not participate), and in the third boat in the May 1911 races (Skinner was cox of the first boat). In 1912, the year Skinner coxed the Cambridge boat, Ridley was cox of the first Lent boat.

He may well have made it his mission to take the rudder of the Cambridge boat as he lost quite a bit of weight over the course of his first year: in Lent 1911 he weighed 9st 2lbs; in Lent 1912 he weighed 8st 7lbs. He seems to have maintained that weight through to 1914 when he steered the University boat to victory (having also steered it to defeat in 1913).

Cambridge won, for the first time in 6 years, by 4½ lengths in a time of 20mins 23secs. This put him one up on Skinner who never coxed a victorious crew and in fact was at the helm when both crews sank in a snowstorm in 1912.

“A small boy with a big voice and a head remarkably well screwed on.”

Chanticlere wrote a short article on him in Lent 1914 describing him as “A small boy with a big voice and a head remarkably well screwed on.” The article also tells us that he was known as “Bob” which they suggest was because “his real names are Lancelot Edwin”.

He was apparently not only a good cox but was also a good scrum half and horse rider. Chanticlere also suggests that his academic abilities were also quite remarkable, claiming that he had a greater knowledge of Shakespeare than the student society devoted to the Bard and his works, the Stratfords (Lent 1914, p16).

After leaving College, he was taking articles at Birkett, Ridley and Francis of Ipswich and at the outbreak of the war, he joined the Inns of Court OTC before gaining his commission with the Royal Berkshires. He was killed in action in the battle of the Somme, August 1916.