Keyser Atkin came up to Cambridge in 1911 after attending Mill Hill School in North London.  He attained his BA in 1914 attaining a second class in the Natural Sciences Tripos, having already taken, and passed, his first and second M.B. exams.​ 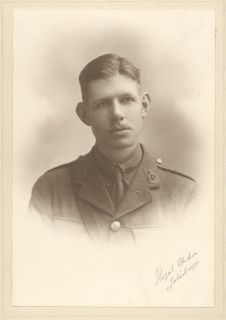 Atkin’s profile in College appears to have been quite high, largely due to his rowing prowess. He went straight into the first boat at the Lent Races in 1912 and straight to the Head of the River.  He rowed at No 2 and weighed in at 12st 4 lbs.  He was head of the river again in the May Races 1912, 1913 and 1914.

He also rowed at Henley, reaching the final of the Grand in 19?? And had an opportunity of trial of the Cambridge boat but was “unfortunately forbidden to row by the doctor.”  (The Chanticlere, Michaelmas Term 1912, p. 28)

The “poets” of College were obviously greatly inspired by him as he appears in four separate poems in the annals of The Chanticlere, as follows:

If you’re any the wiser
For anything Keyser
May ever opine
You’d better resign
(Easter Term 1913, p. 27)

Our mentor in a dulcet tone
Was murmuring down a megaphone
- O ye oarsmen! don’t despise a
Coach so excellent as Keyser -
“Stroke, you’re rowing all alone!”
(Lent Term 1914, p. 27)

I took my woe to Keyser A.
Who told me how the plague to stay.
Not being fond of cooked meat,
I took his cue and chalked the seat,
And though I thus avoided friction,
La joie de fleuve was still a fiction

Atkin’s obituary in the Jesus College Cambridge Society Annual Report 1919 records that he continued his medical studies and “qualified in time to take part in the war”.  It goes on to say that he was captured by the Germans in October 1917 but then repatriated in February 1918.  After returning home, he returned to the front and died from wounds received in action on 6th June 1918. (p. 20)