John Hugh Jerwood followed his brother F.H. Jerwood (1905) up to Jesus College in 1909 and took his BA in 1912 having taken special papers in History, and Theology. 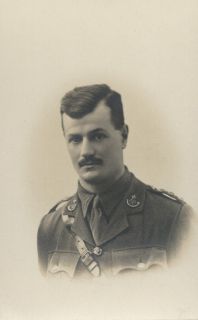 The 1912 May race is interesting as Jesus regained the headship of the river. Steve Fairbairn, Rev. F.J. Foakes-Jackson and F. H. Jerwood coached the Jesus first boat. The final race is described in The Jesus College Boat Club records by F. Brittain and H.B. Playford: “At Grassy they had reduced Trinity’s lead slightly, and at Ditton were within half a length of their stern. After rounding the corner they up fast and regained the headship at Glasshouses.” (pp. 48-49)

By Jerwood’s final year he was President of the Farragoes, though Chanticlere notes the decline of this society stating that “For many long years they have withstood all counter attractions, even those of the Theological Tripos, and have met weekly on Saturday evenings.” May term 1912 saw them meet only once. Chanticlere goes on to record that Jerwood “made a brave attempt to defend the character of the modern girl”. (Page 17.)

The photograph of Jerwood was sent to College after a request from the Master at the end of the war along with a letter from Dora E. Jerwood, who is most likely to have been his mother as the address shows it was sent from Little Bowden. Jerwood had married in 1916 and had gone on to be a Schoolmaster at Winton House School in Winchester.  In the letter Mrs Jerwood writes “I enclose a photograph of Hugh, I am sorry we have been so long in sending. I hoped to have found a better one.”