John Hugh Allen came up in October 1907 from Wanganui Collegiate and the University of Otago, New Zealand. 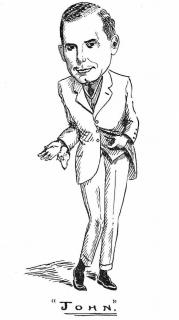 Allen took a highly active part in many aspects of College and University life. At College he scored a century for the second XI cricket team and was a member of the Boat Club.

But his first loves were writing, speaking and politics and these define his career at Jesus. He wrote a column and was a driving force behind the newly revived Chanticlere and in his first term formed “The Jesus College (Cambridge) Debating Society”, otherwise known as the Roosters, which met in his rooms in No 1 Staircase, Chapel Court.

A.K. Gray (an original member of the society) wrote “He was our star speaker, and was greatly admired for his manner of putting one hand in his trouser-pocket, whilst he gracefully waved the other backwards and forwards from the wrist.” (The First Twenty Years of the Roosters, p1).

Allen was also prominent in the Cambridge Union. He was elected to the Committee in May 1908 and by Lent Term 1911 he had been elected President of the Union, only the second Jesus man to have held the honour at that time. His sister Ina Montgomery reports in her memoir of him that he spoke in nearly every debate.

Allen was a supporter of the Conservative and Unionist Party, which according to his successor as President, Kenneth Callaghan, was unusual for a student studying the Economics Tripos.

Callaghan wrote “…the Economics Tripos generally tends to produce the young Liberal and Free-Trader, but John never altered his ideals, and made out a very good economic case for Imperial Preference. This he did both in private and in public, and was often in debates opposed by the younger Liberal dons and made a very good defence” (John Hugh Allen of the Gallant Company, p18).

In his final year Allen was made a member of the elite Natives club, a dining club of only eleven members which he described to his sister as “full up of athletic bloods”. He was deeply honoured by the invitation and as his “Cock of the Roost” profile in Chanticlere says “the Natives’ colours form the proudest ornament of his neck” (Chanticlere, Lent Term 1911, p18).

Called to the Bar

He took the degrees of BA and LLM in 1911. The Jesus  College Society Annual Report obituary records that it was his intention to return home to be a lawyer and a politician in New Zealand. He was called to the Bar in early 1914 and had booked his passage home when war broke out. He never returned to his native land.

After joining the Inns of Court O.T.C., he obtained a commission in the Worcester Regiment and trained with them for a few months. He was then attached to the Essex Regiment and left for the Dardenelles with them, landing at Cape Helles on 25 May.

He was killed in action 12 days later. Meanwhile back home in New Zealand his father Sir James Allen, Minister for Defence, was organising and launching the New Zealand Expeditionary Force to take part in the same campaign that claimed his son’s life.

General Richardson wrote to Sir James with the details of his son’s death, saying that he had attempted, with another officer, to stop the fall back of troops as they were being bombed out of various trenches.

He wrote “I am pleased to be able to tell you that he died doing a very gallant act, which under the circumstances required considerable courage, as it is almost certain death to put one’s head above the parapet, there to get out as he did and endeavour to get men forward required a cool head and a brave heart” (John Hugh Allen of the Gallant Company, p203).

He is commemorated in New Zealand by a stained glass window in the Anglican Church of All Saints Dunedin.