​John Hamon Massey came up to Cambridge in 1911 and is recorded in the admissions register as being previously educated at the University of New Zealand. 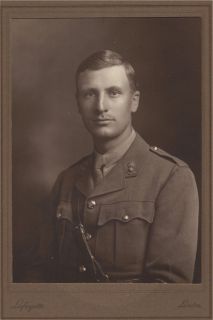 He attained a Military Special BA on 16 July 1915, though he was not in attendance.  Jesus College Cambridge Society Annual Report 1916, p. 33

There is no obituary for him in the Annual Report, nor is there mention of him in The Chanticlere, so little is known of his time in College. Although we do know that rowed in the third Jesus boat in 1913 and in both the Lent and May races 1914. The commemorative oar for the third boat 1914 still hangs in the College Boathouse and is a poignant reminder of the five men from that crew who fell.

We have two letters from his parents who sent a donation for the College’s war memorial in the cloisters which they felt was the “ideal place for the memorial”.  Writing from London, before returning home to New Zealand, in February 1920 his parents wrote that their son had “spent some of the happiest months of his short life at Jesus College.”

He was awarded both the Military Cross and the Croix de Guerre.